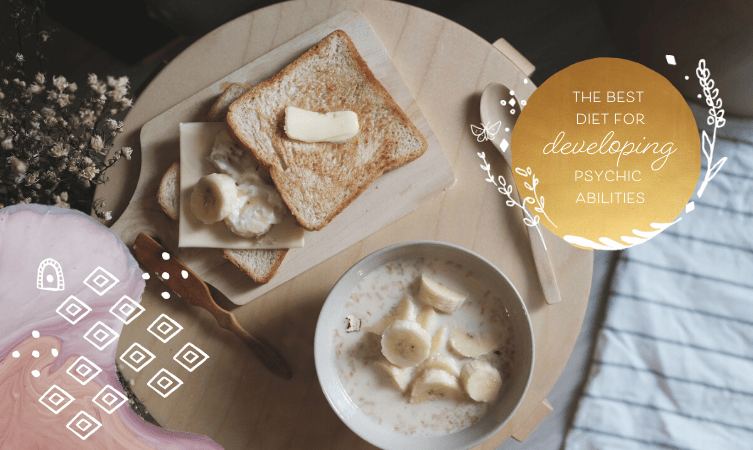 “What is the best diet for developing psychic abilities?”

Here’s what people’s Spirit Guides had have to say about diet and psychic abilities, during readings:

Here’s why: meat dulls your senses and lowers your vibration.  First off, it takes more vital life force to digest meat.  Eating meat helps to ground the ‘mind’ energy (the energy of the upper chakras) and brings it down into the lower chakras (the root chakra, sacral chakra and solar plexus). Your body is so busy processing the meat that it reduces your psychic sensitivity – after all, when you eat meat, it brings a lot of blood down to the digestive system and away from the areas associated with the upper chakras and intuition – like the brain, and some senses like hearing and sight.

Secondly, some believe that meat contains residues of the animal’s energy that was killed for its meat.  When you take in meat, you are taking in the energy of that animal too, including any fear and pain.

Why this is good for some people and bad for others

If you’re trying to develop psychic abilities but it’s not easy for you, it wouldn’t help you to consume meat because it will keep you in a desensitized state and slow down your development.

When you open up to spirit, you will often feel called to stop consuming red meat anyway.

When I did my Spirit Guides coaching course (it was a six week coaching course I did last year, which is now discontinued), I noticed that one week, there were several students who all individually decided to give up red meat.  They just felt like it was the right thing to do instinctively.  This makes sense, since eating more plant-based food helps to open up your psychic abilities.

But on the other hand, if you’re already a very psychic, sensitive and empathic person who needs more grounding, meat will give you that.  It forces you to desensitize yourself to the energy of the dead animal (because otherwise you’ll just feel bad) and it will dull your perception somewhat.  It will bring your energy down into the lower chakras and stop you from ‘spinning your wheels’ in the upper realms.  This can be good if you need more grounding and less escaping into the etheric realms.  Although depending on your views on this issue, eating meat might not be the most ethical way to ground yourself.

I currently eat a predominantly vegetarian diet, but I also eat fish several times a week, and I eat poultry and eggs.

The only thing I can’t stomach is red meat – beef and lamb. To me it would be like eating a fellow human.  I occasionally have bacon but I feel bad afterwards.

(Update Jan 2018: I now eat all kinds of animal foods, except dairy products, and have noticed no adverse effects on my intuitive ability.)

I’ve tried every kind of diet (from raw vegan to the standard junk-food diet) over the last several years and I’ve observed the impact it has on my sensitivity. Here are my personal observations on the impact various diets have on my psychic abilities:

Standard diet: (when I say a standard diet I mean one that is not particularly healthy.  This includes junk food, plenty of biscuits and cakes; lots of processed carbohydrates like white bread and of course, meat. This is the kind of diet I ate when I was younger.)

If you’re on this diet and you want to develop psychic abilities, you’ll often find yourself called to clean up your diet.  This is because a cleaner diet makes it easier for spirit to reach you.  A body that is full of processed junk food is not good for connecting with spirit. It will still be possible to connect with spirit, but it’ll use up more energy because you’re desensitized from all the junk.

When I was developing my psychic abilities about four years ago, I was eating red meat.  I switched over to a vegetarian diet from time to time, because I felt instinctively like I wanted to cut out meat.  However, whenever I relapsed back into eating meat, I’d get the same dream:

I’d be walking through a city in Spain, sightseeing, and I’d be with the same guy each time (who was my tour guide).  Instead of taking me to see monuments and buildings, he kept showing me various rotting carcasses of animals that were dotted around the streets like grotesque sculptures.

When I asked why he was showing me such disgusting things, he’d tell me: “this is what your body is like when you eat meat.”

Eating meat desensitizes our empathy and ability to pick up things, and it desensitizes us to suffering.  That’s why it’s not always helpful to eat meat if you want an ongoing relationship with spirit (Ie. your Spirit Guides and Higher self) and you’re the type of person who needs to actively create and nurture that relationship – as opposed to the sensitivity already being there.

The other extreme – Vegan and raw vegan diets:

A vegan diet will help to improve your connection to the spirit world quite quickly.  For me personally, a vegan diet (which means eating only plant-based food – no dairy products or eggs) is too un-grounding because I don’t need to improve my connection to spirit any further.

A raw vegan diet (Ie. a diet where you only eat raw fruit, nuts, seeds and vegetables) will positively catapult you into the realm of psychic sensitivity.  I was raw vegan for two periods – one which lasted three weeks and one which lasted for a couple of weeks.  It heightened my sensitivity a great deal. The first period went well for one week but then I began to feel spacey and disoriented.  With the work I do (which keeps me even more attuned to the spirit realm than I would normally need to be), a raw diet and a vegan diet are too big a step in the direction of openness to spirit.

I have enough openness already and if anything, at the time I went raw vegan, I needed to tone down my empathy and sensitivity.  Raw veganism did the opposite of that.  Veganism didn’t help either.  For most people, raw veganism can be very unbalancing.  So, although I believe that veganism is the most ethical diet, I don’t believe it is helpful for very sensitive types.

For me, the compromise is vegetarianism with some fish (what some might call pescatarianism).  This is a diet that has some animal products, but is mostly plant-based.

But that’s just me.

I believe that it’s best to observe all your reactions to your food, when choosing a diet.  And weigh them up.  My heart says yes to a vegan diet, but my mind and my body say a big no.

In the end, the right diet for you depends on your current level of openness to spirit. If you’re not open to spirit already, then switching to a plant-based or raw diet will help you to get there. If you’re already sensitive, it can unbalance you, depending on your constitution.

(Incidentally, Ayurveda sheds a lot of light on the role of constitution when it comes to the best diet for maintaining balance, whether you’re developing your psychic abilities or not.)

If you’re interested in reading more about how to ground yourself, and the role of food, check out these two articles:

What do you find is the best diet for developing psychic abilities?  Have you tried vegetarianism, veganism or even raw veganism?  What impact did they have on your psychic sensitivity?

The Forgotten Clairs – Clairgustance And Clairsalience
By Shar Smith. Many people are familiar with clairvoyance (clear seeing), clairaudience (clear hearing), claircognizance (clear knowing) and cl...
How to Access and Read Your Akashic Records
When I tell people that I read the Akashic Records, many have not even heard of this term. People often have heard about channelling Spirit Guides...
4 Ways To Use Crystals In Your Day-to-Day Life
By Vanessa Kunderman. Crystals don’t have to be reserved for your spiritual practice. They can integrate into your daily life to round out a li...