Precognitive Dreams – Are You Dreaming of the Future? 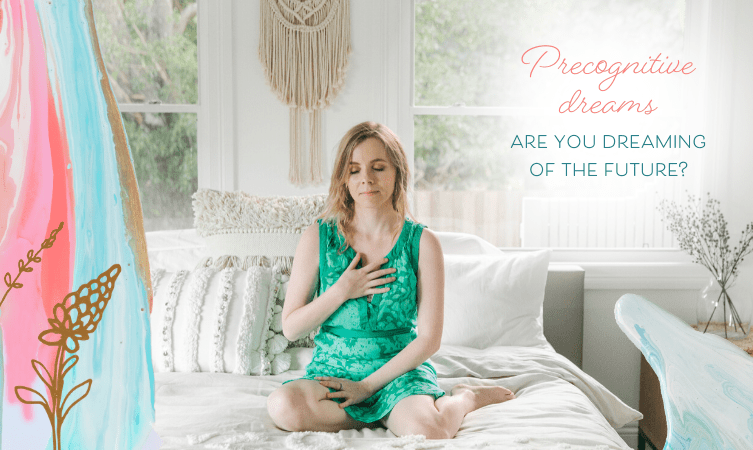 I recently heard about a precognitive dream in a true story about a Welsh artist – a single woman in her fifties – who owned a house in the city.  But at night she kept dreaming of a beautiful house in the countryside. After having dreamt of this house several times, she painted it, with all the details that stood out in her dream.

Then a few months later, she met a man and fell in love.  He took her to spend the weekend in his home, which was in the North of England. She could not believe it when she saw his house – it was the house from her dream (and her painting) – right in front of her eyes, right down to the last detail.  She showed him the picture she had painted.  She later moved into that house with him.

People regularly send me emails recounting their weird/paranormal/intuitive experiences and so I hear stories similar to this one, relatively often.  And I’ve had experiences like this myself, although not quite as romantic and dramatic as the story above.

Dreaming of the future is known as precognitive dreaming.

People usually ask me: how can I further develop this gift, and what is the purpose of it?

Here are my thoughts on those two questions.

The Purpose of Precognitive Dreams

To my mind, precognitive dreams have two main purposes:

Firstly, they can act as a warning.

A dream like this sometimes might show you something unpleasant that might occur if you continue on the path you’re on.  You experience the consequences/unpleasantness in your dream, and it allows you to course-correct and make another choice if you want to, so that you avoid the outcome shown in your dream. Then what you dreamed may or may not come about, depending on the choices you have made.

Sometimes people have precognitive dreams about world events.  If the experiences of readers of this blog are anything to go by, it seems some people who are very ‘tuned in’ dreamt of the 2011 tsunami in Japan the night before it happened or a few days before.

The second purpose of a precognitive dream is to show you that you’re on the right path.

Then some time later, you find yourself in that exact situation, in those exact surroundings, with the person in your dream who says what they said in your dream.  You might have the same exact feeling in your reality as you did in your dream, like a weird déjà vu moment.

This has happened to me several times.  I have travelled around a lot since I was 19 and even before I know I’m going to move again, I have often dreamt of myself in a particular part of the world. It would be in a very specific building or house, or walking down a specific road, where I see something unusual in my dream.

A few months or several months later, I find myself in the house from my dream, or walking down that road where I see the thing I dreamt of. And I’m not talking things you see every day, but details out of the ordinary, that really hit you in the face as being from the dream.  And a strange feeling of déjà vu that accompanies it.

Time Travelling in Your Sleep

In terms of how precognitive dreams work, I believe that when we’re asleep, we have access to the past and to the future. Have you ever relived a scene from your past in minute detail, in a dream? I know I have. Being asleep, and in the astrals, allows you to time travel – both to the past and the future – and then remember the parts that you need to remember.

I remember experiencing this vividly when I was about 19 and at university. I was taking a nap and dreamt that I had to wake up because the fire alarm was sounding. When we all got outside, it turned out my housemate had set the fire alarm off with the steam from her iron. She had been ironing her bedclothes. I thought in my dream: “who irons their bedclothes – what a waste of time!”

My nap was cut short by the fire alarm. It turned out my housemate had been ironing her sheets and the steam from the iron had set off the fire alarm! (This had never happened before.)

The details of this dream coming true showed me that we can time travel, both to the past and the future, when we’re asleep. Whether we want to remember much of our travels, and whether it serves us to, is a completely different matter.

Can You Develop this Ability?

When you develop a psychic gift further, it’s not a party trick. For it to work, it has to serve a purpose, and it has to serve you.  Our Spirit Guides and Higher selves are not interested in us developing cool super-powers.  They are interested in us developing the gifts that can help us progress further along our spiritual path.  Psychic dreams do not always fall under that category.

If you dream of a future event and it comes true, to me it is just a little nod from spirit that you’re walking your path.  You haven’t strayed from where you planned to go. But in my opinion, those little nods cannot be easily controlled. They are a blessing and they are comforting, but we can’t have them regularly because they would spoil the ending, all the time.

So I think it’s best to just enjoy the ones you do get.

The Value of Confirmation

There is a lot of value in knowing you’re on the right path because often in our lives everything can point to the opposite.  We may feel that we’re not in the ‘right place’, or that everything is going wrong, and we’re not walking our true path. So a precognitive dream can be a blessing in this way.

I began to suspect I was on the wrong path in early Autumn 2010. I was living in Christchurch, NZ and juggling this website with a full-time job working as an English language teacher.  Ordinarily, I would choose self-employment, but the career path of English teacher was supposed to help me to get residency in New Zealand (I am a British citizen.)

I began to feel in my heart that I was never going to get residency that way, and I was wasting my time. In hindsight, I was totally right for various reasons.  But I was told by people around me that it would work out and I was also promised the kind of contract I needed in order to get residency.

I even got a little nod from spirit that I was doing the right thing, in spite of the fact that I was stressed, exhausted and convinced that it wasn’t going to work out. That reassurance came when I was teaching a group of Korean students, it was a beginners’ class and we were practising communicating date of birth/birthdays.

I asked a student when she was born.  In the two seconds between asking the question and receiving the answer, a voice said to me: this student’s birthday is the 24th January and when she says that to you, you’ll know, we promise, you’re on the right path.  There’s nothing else you should be doing right now, even if you feel this is going nowhere.

The student said: “My birthday is the 24th January.”

I did relax after that, as funny as it sounds.  The time I spent teaching English served its purpose, although my contract fell through after the first major earthquake we had in Christchurch in 2010, and I didn’t get residency through that avenue.

I feel that precognitive dreams are like that – comforting nods that show us we’re on our right path, even if it seems that path is less perfect than we thought the ‘right path’ would be.

What about you? Have you had a similar experience?

Essential steps to develop your intuitive abilities & communicate with your Spirit Guides. Connect even if you never have before.

Interview with Jay Linden - The Saturn Return and How It Affects You
Are you around (or approaching) the ages of 28-30 or 58-60? Are you wondering how to make the most of this time (your Saturn return)? Ever w...
The Hall of Akashic Records
The Hall of Akashic Records is an energetic ‘place' or realm which holds all the memories and records of our souls. All the events, words and thou...
10 Steps to Providing an Amazing Psychic Reading
By Shar Smith. Delving into the intriguing world of psychic development is life changing and feels very empowering. It is comforting to know th...