Cord-cutting: A Spiritual Technology That Changed My Life 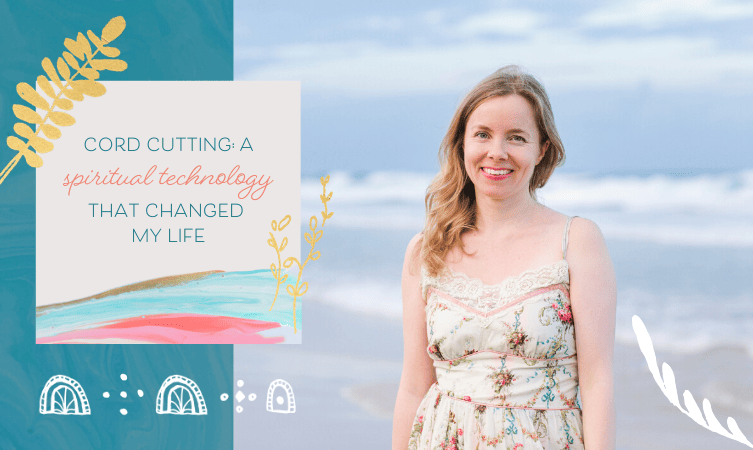 Writing the words ‘spiritual technology’ made me chuckle a bit!

I decided to write an article about cord-cutting as a healing technique because it has made a big difference to me and to my relationships.  Anyone who has had a difficult relationship with a significant other or parent figure can benefit from this article. But first of all, I’m going to begin by explaining what cords are exactly.

What are cords and why cut them?

A cord is a negative energetic structure that ties you and another person together.

When you form a relationship with a person, you make two types of connection.  The first type of connection is the spiritual, positive bond that contains energies like unconditional love, good times and lessons learned together, fondness, affection – stuff like that.  This is a positive cord that we never sever because it contains all that is good about the relationship.

The second type of connection is a negative cord – this energetic structure is very different from the positive type because it contains all the negative energies that have ever been a feature of your relationship.  For example, let’s say you have a cord to an unfaithful ex-boyfriend.  Encoded within this cord are the feelings you had when you found out he was cheating on you.  This could be feelings of paranoia, energies of inadequacy; feelings of rage.  Also encoded within the cord could be the pattern of wanting to please your boyfriend, so that he wouldn’t ever leave you.

When you split up, you may never see each other again, but the negative structure (the energy cord) between you remains.  And this cord that connects you two contains those unhelpful patterns and dynamics: rage, inadequacy, paranoia; keeping quiet and pleasing others at your own expense.

Even though you feel like you should have moved on from the relationship, those energies circulate between you both and still affect you.  For example, you still think of your ex-partner and you still feel resentful and angry. Perhaps when you get into a different relationship, you feel the same old paranoia.  And things that happen remind you of the old relationship – even though it bears no resemblance, in reality.  This happens because those negative energies from the cord are flowing into your aura 24/7 and affecting your ability to move on; or feel, think and act differently.

This relationship is just one (dramatic) example. You can form cords with literally anyone you have (or have had) a meaningful relationship with, and each one is draining in its own way.

Cord-cutting is a spiritual healing process that energetically severs that negative attachment between you and another person so that the shadow of that past relationship does not hang over you or affect your behaviour in the present.  This means that the rage, paranoia and inadequacy, particular to that aforementioned relationship can be eliminated.  And obviously, other relationships can be improved too because of it.  It does not mean that you lose contact with the person or that it weakens the positive connection.  Cord-cutting will never mean the person disappears from your life unless you consciously make that happen by severing contact.  If anything, that pure, positive connection is improved because it is no longer overshadowed by negative energies.

(And note that by cutting the cord to an ex-boyfriend, it does not mean that you will not automatically ever have those patterns with anyone else – often it’s helpful to go right back to childhood and cut cords with parent figures and anyone who mistreated or abused you as well. But cord-cutting does free up more of your energy and stops you from repeating the pattern with the person in question.)

Who do we form cords to?

The biggest cords are often formed with:

Smaller cords may be formed with:

Every relationship is unique so you could have a big cord to your boss but a smaller cord to your favourite sibling. Sometimes cords are so small that they don’t affect you at all.

You will usually be able to tell who you have the most toxic cords with, because there will be a certain negativity associated with the relationship, no matter how much you love or respect the person.

The most impactful cord-cutting I’ve seen happens through cutting cords to parents, partners and ex-lovers.

How does cord-cutting happen?

An effective cord-cutting process will usually involve at least 10 steps and will take at least 35-40 minutes.

Effective cord-cutting does not happen through simply asking the archangels to sever the cords, seeing them do it and then thanking them.  Believe me, I’ve tried it and it doesn’t work.

I now understand that the golden rule of cord-cutting is this:

In order to cut cords effectively, you have to discuss (and understand) what negative patterns are a feature of your relationship with that person. You need to learn from those patterns and impact other relationships. Obviously, you also need some intuitive ability to be able to find out what patterns are present within the cord.

The client really has to realize what these are so that other relationships can be impacted and so they move on from these negative patterns.  Obviously, you can’t do this if you just ask Archangel Michael to sever all cords to everyone you’ve ever known.  After all, the cords contain valuable learnings and so Archangel Michael won’t eliminate all those wonderful opportunities for learning, by just obliterating the cords.  That would be like the earthly equivalent of cheating on a computer game.  And it’s not possible to do because the Archangels & Ascended Masters who cut cords for us don’t oblige when we ask for their assistance in that regard.

When you cut a cord properly, you should never have to cut a cord to a person more than once.  And you only ever have one cord to one person.  If a practitioner says you need to do it more than once or on a regular basis, they are probably referring to psychic ties instead (psychic ties should not be confused with cords – cords are much bigger and more significant.)

My personal experiences with cord-cutting

When I first came across cord-cutting in 2008, I was skeptical about how cord-cutting could benefit me. In the first session I had, we cut a cord to an ex-boyfriend and by the time we had finished I felt totally different – as if the relationship had happened 100 years ago.  I couldn’t imagine how it had ever had a negative impact on my life, it felt so long ago.

How cord-cutting made life better

I’ve always been a head-in-the-clouds kind of person.  I spent much of my early life wanting to escape from the reality of life.  I would say I probably never engaged with life all that much, and spent much of my childhood absorbed in studies.  I was also deeply absorbed in the spirit realm, with a strong connection to my guides, spirit and non-physical teachers, yet it felt like I was not cut out for the practicalities of real, earthly life – ever.

Until I cut the cord to my father.  I literally changed overnight in terms of groundedness in 2009 and it has been like that since then.

The cord from my father and our troubled relationship at that time meant that I was receiving huge amounts of negative energies that I wanted to escape from – hence my desire to escape from the world.  When I’d got readings with other intuitives, they’d tell me that I was carrying and running away from someone else’s emotional burdens. Although that was useful information in some ways, it also wasn’t useful because I didn’t know what to do about it.  Life was very heavy and I felt very drained, until I cut the cord to him.

In the days after I cut the cord, emotions flooded out of me and it feels like I became 10 times more grounded overnight. And I wrote this article in the months after that session. The cord-cutting was the catalyst for that change.

It wasn’t easy coming back to earth in the weeks following the cord-cutting.  In fact, it was really painful.  I had to face emotions I’d buried for years.  But I felt much better since I cut it.

I find it does help to have your biggest cords cut by someone else, who is an impartial person. For example, if your relationship to your mother is very fraught, it may be hard for you to get some objectivity and know what patterns are present in the relationship.

If you have any questions or comments about this article or cord-cutting, leave me a comment.