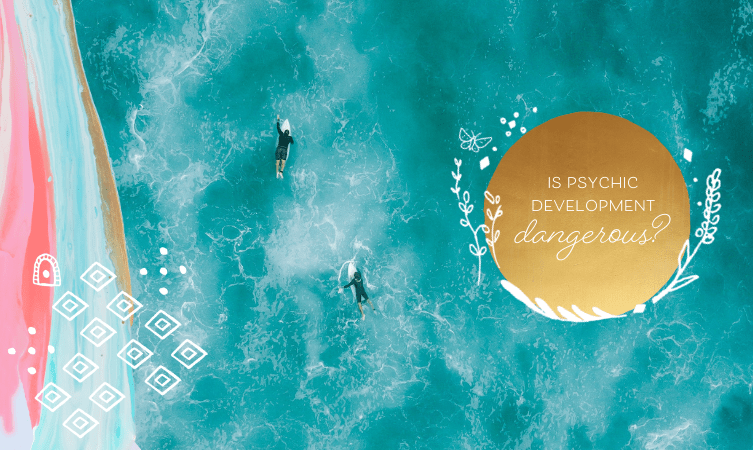 Several years ago, when I was living in Spain and teaching languages, one of my lovely Spanish students, Maria, invited me out for the day.  We lived close to the border with France and so we decided to go for a day-trip to a quaint French town.  I’m sure we did the usual touristy things that day, such as admired the view of the French Pyrenees, visited a cathedral and tasted cheese.  But the thing that stands out in my memory was the conversation in the car on the way to France.

Maria’s husband: Maria tells me you are planning to leave your job as a teacher soon.  What will you do afterwards?

Me: (taking a deep breath): I am planning on doing readings for people.

Maria’s husband: You mean psychic readings? Like telling the future?

Me: Not really. More like helping people to understand their lives better.

Maria’s husband: (for literally the next half hour, without me being able to get a word in edgeways)

Variants of: you don’t want to go down that road/you don’t know the forces you’re dealing with/you’re putting yourself in danger/you are much better off as an English teacher.

My student Maria didn’t know what to say, and neither of us argued much with him.  I gave up arguing after about five minutes and she looked like she wasn’t very much in the habit of ever arguing with him (probably smart on her part.)

I didn’t argue much because it seemed like he knew little about the spiritual world and didn’t show much willingness to listen to me either.

He had visited something he called an ‘occult circle’ in Madrid in the 1970s (it sounded like a psychic development circle), had had an unpleasant experience with what sounded like some very creepy people, and concluded that the whole area of anything related to what he called ‘the occult’ was dangerous and bad.

He was also very convinced of his opinions – nothing I could say was going to change his mind!

Hindsight is a good thing. But I’d still say that no, psychic development is not inherently dangerous – I have not changed my mind.

So if psychic development is not dangerous, why do people warn against it? And why does it scare people?

Some of the people who take my courses tell me they have unsupportive families. I had family members warn me against going into psychic development when I was in my teens, and some high school teachers of mine back in the day got angry and scared when I got my tarot cards out of my school bag (I used to do tarot readings for my classmates and teachers at high school!)

In my experience, people warn against psychic development when they don’t understand it.

Psychic development seems scary when you don’t know where you’re getting your guidance from.  But if you’re a reader of this blog or you’re doing my Intuitive Awakening Course, you’ll know that psychic development, (at least for me) is about getting information from your Higher self (otherwise known as your soul), your Spirit Guides, and your guardian angels.

What could be scary about being more in touch with your own soul – the part of you that exists beyond this lifetime? And being in touch with your soul, so that it can guide you towards a fulfilling life?  In fact, if you don’t like the idea of Spirit Guides, you don’t even have to go there! And you can still do intuitive development.

Some people don’t understand that psychic development is mostly motivated by this.  They think it’s about seeing dead people or about holding séances. And having dramatic or frightening experiences.

So, basically, when you’re taking your warnings from people, I’d say don’t listen too closely to someone who hasn’t really delved into psychic development and doesn’t know much about it.

Instead, listen to someone who has done it.

The worst that can happen (in my experience)…

You should be channeling either your Spirit Guides, your Higher self or your guardian angels.  Ideally, you will also be utilising some form of energetic protection so that you don’t channel any other sources. If you fail to do this, you might channel an earthbound spirit (basically, a stuck soul who has died and is reluctant to cross over to the other side.)

You will probably notice when you accidentally channel an earthbound spirit because the guidance you get often sounds like mumbo-jumbo. Or someone who is messing you around.

An earthbound spirit is a soul who really needs to move on but is afraid to. The earthly equivalent of channeling this sort of spirit is approaching an addicted homeless person on the street for life advice and guidance. You might happen upon an enlightened homeless person, but you might also happen upon one who is on his third bottle of cider for today so doesn’t have anything too meaningful or coherent to say to you 😉

On the other hand, guidance from ‘suitable’ sources such as your Higher self or Spirit Guides is practical, actionable or helpful in some other way.  If it’s none of those, chances are you’re tuned into the wrong person (or should I say ‘being’.) And you need some energetic protection to make sure that doesn’t happen again.

If you’re afraid of channeling earthbound spirits, then get yourself a process that protects you from that. Take a psychic development class, like my Intuitive Awakening Course, which teaches you how to avoid channelling earthbound spirits. There is usually a component of energetic protection in most courses and programs, if they’re good. If you’re not sure, ask the teacher of the class or course.

Psychic development is not spooky, scary or dangerous.

I hope this reassures anyone out there who has been told to stay away from the spiritual realm.

Should You Pass on Psychic Messages to People You Don’t Know?
I wanted to write about this because it's something people ask my advice about, from time to time. Personally, I do my best to be 'switched off...
Communicating with Spirits that Are Hanging Around Your Home – Should You Do It?
Over the last 12 months, I’ve had plenty of questions about ghosts, poltergeists and general spooky stuff. Seeing as it is Halloween today, it see...
Seeing faces of people you’ve never met before, while meditating
“When I meditate, I often see faces of people I don’t recognise, flashing through my ‘mind’s eye’, one by one. What does this mean?”