Your intuition Can Save Your Life (& Stop Your House Burning Down!) 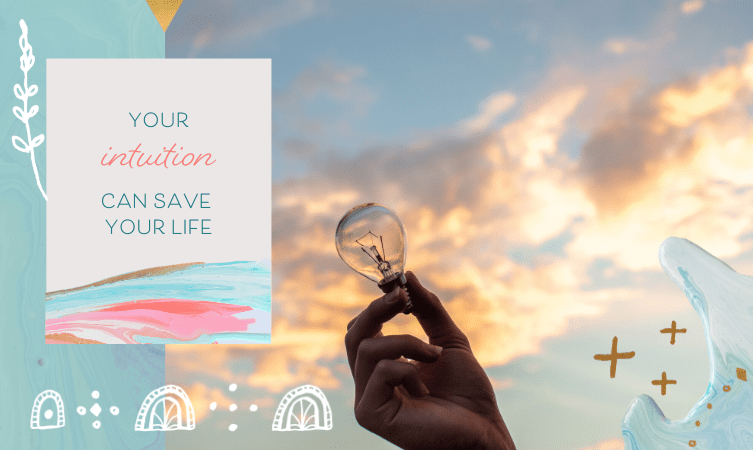 A few days ago I was sitting in my home, having dinner with a friend, when I saw something moving out of the corner of my eye.

I didn’t even look to see what it was (things moving in the corner of my eye is not an uncommon occurrence…it can be the sign of an earthbound spirit…and I just thought I’d have to do a spirit clearing for my home later.)

But my friend looked, saw what was going on, and then said something along the lines of “f**k!!!”

My lovely second-hand floor lamp that I’d bought from a homeless charity a few months back had a load of dark smoke that was rising fast and furiously from the top of it. It looked like it was about to burst into flames any moment.

My friend quickly unplugged the lamp, took the bulb out for me and then took this photo of it before we threw it away:

I bought this floor lamp a few months ago from the Sheffield Emmaus shop, whose profits go to a homeless charity. But ever since I bought the lamp I’ve felt uneasy about it in a way I had barely registered in a conscious sense. 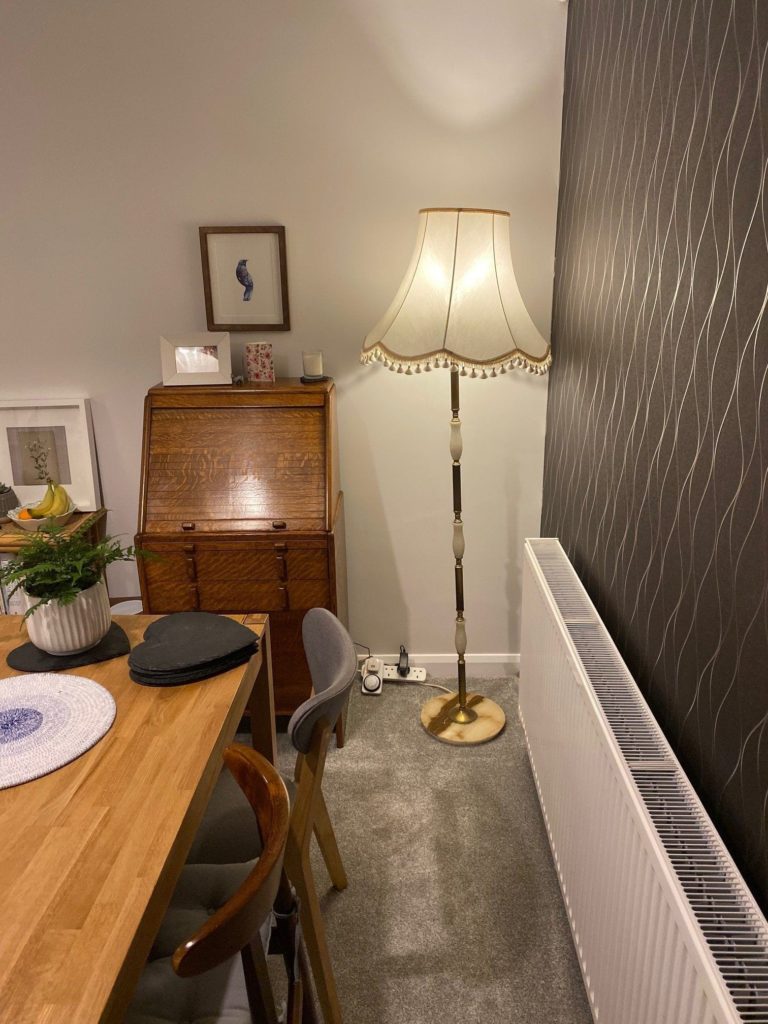 I remember when I bought it, the man who helped me carry it to my car unscrewed the bulb that came with it and handed it to me to transport separately. The lamp bulb looked OK to me so I popped it back in when I got home.

And objectively speaking, there was nothing about the lamp that suggested it might be a fire hazard, either. It functioned perfectly. It was priced appropriately. It had no visual flaws. No one said anything to me to suggest it was faulty. It looked like a good quality, second-hand item. Plus I’d bought second hand electrical goods previously (I love vintage stuff) and never worried before.

But I noticed I wasn’t leaving the lamp switched on unattended, the way I do my other lamps. Also, just before I had some house sitters come to stay to look after my house during a trip to Spain last month, I was worried enough that I decided to call in an electrician and spend £70 on some PAT testing for my the floor lamp (basically to check it was functioning OK and was not a fire hazard for my house sitters while they were here.)

The testing came back OK and the electrician seemed mystified as to why I had called him out to test one lamp at a cost of £70 (no-one, not even landlords who have a responsibility to comply with various fire hazard regulations, had ever done that before, he told me). 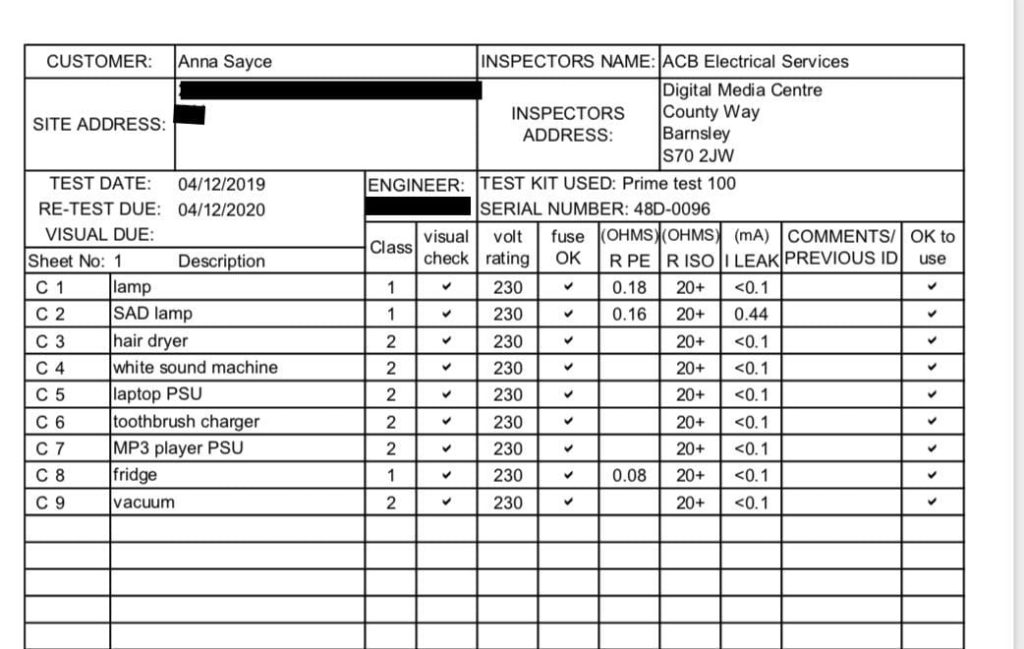 I didn’t express my unease to him directly. He just thought it was a bit of a weird thing for me to hire him to do, and told me so.

As he had a set call out charge (it was the same price for one item or many items), I also had him test a few other things, while he was at it (to try to take the sting out of paying £70 to test one item!) but I wasn’t concerned about anything else — just the lamp. And objectively I had no reason to be concerned, so I accepted what he told me, swatted away my own concerns and didn’t mention anything to my house sitters. I was being paranoid.

Just to be safe, I also took photos of every receipt for everything I had purchased for my new home (I recently moved into a new home after 4 years of being a homeless international house sitter!), uploaded all my receipts to the cloud and then purchased contents insurance. That way if my house burned down and I wasn’t in it, at least I would be insured and the receipts for the insurance would be in the cloud (rather than burned in a fire.) But I considered this behaviour slightly irrational at the same time. I do normally purchase house contents insurance but I’ve never uploaded any photos of receipts to the cloud before.

But it turns out my intuition was right, and the electrician was right too — but it wasn’t the lamp that was dodgy — it was the bulb.

After the dodgy bulb was removed from the lamp, I Googled it. I didn’t know this before obviously, but the bulb was actually an old (pre-2009) CFL one, and CFL stands for: compact fluorescent lamp.) I.e. these guys: 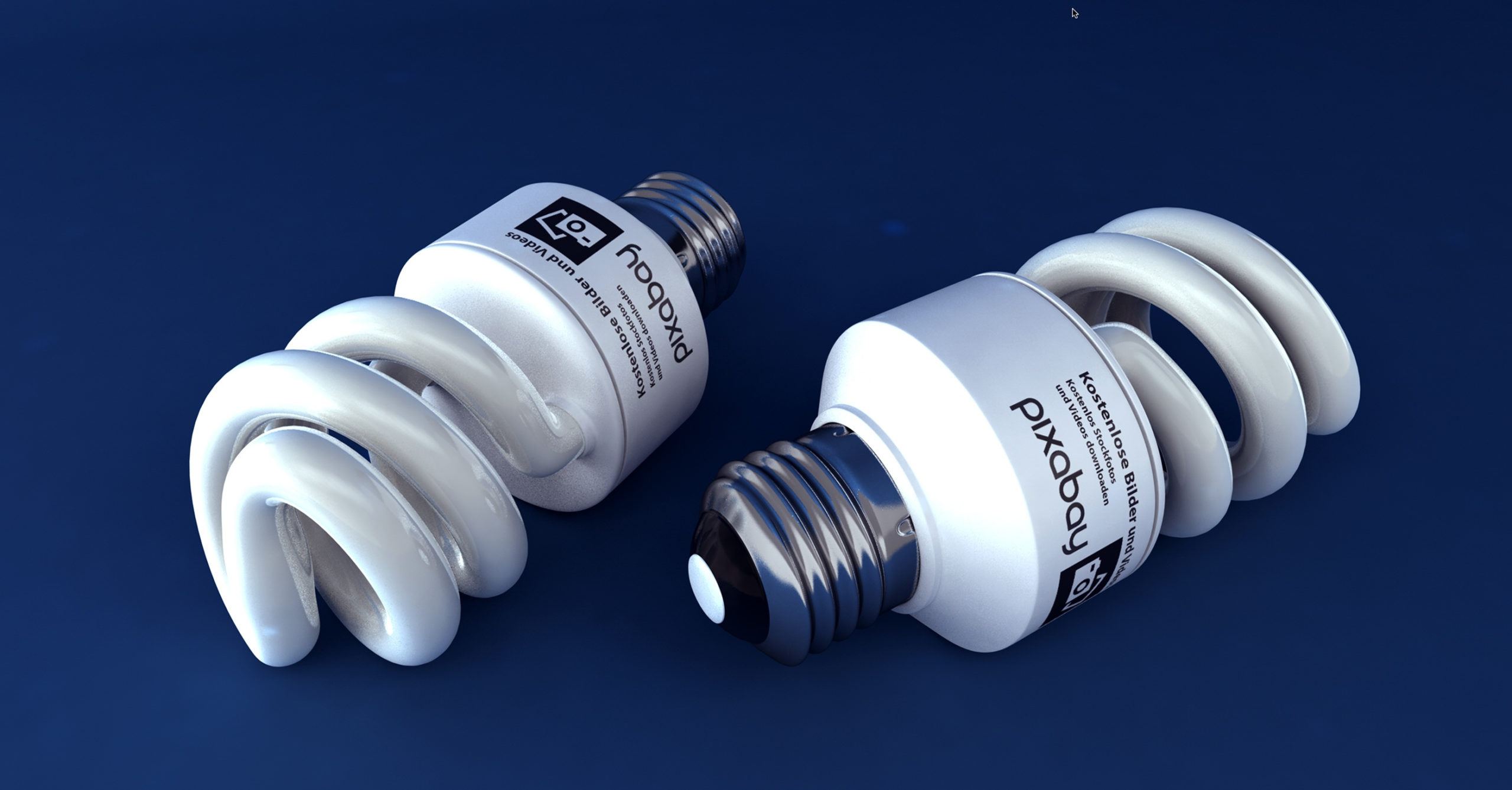 The CFL bulbs in the picture above look fairly new, but the old (pre-2009) CFL bulbs are now considered a fire hazard, and seeing as these bulbs last for a very long time, lots of them are still in peoples’ homes. (I don’t like linking to the absolute cesspit that is the Daily Mail website but this article from them is the best one I could find about the fire hazard that these bulbs constitute.)

Here is an extract from the article:

Compact fluorescent lamps, which will gradually replace traditional incandescent bulbs, are a fire hazard that could burn down your home, experts have warned. The lamps (CFLs) use electricity to heat an element in the lamp’s base that leads the mercury vapor gas in the coils to emit light. But when a CFL can no longer produce light, the electronics in its base will still try to function, sometimes leading to overheating, smoke and fire.

I’ve now changed all my CFL bulbs to LED ones, which are less of a fire hazard.

Apart from learning that pre-2009 CFL bulbs are dangerous, here’s what else I learned/was reminded of, through this experience:

1. Intuition can save lives

This is not the first time my intuition has tried to save me from a bad experience. This is what intuition does and why I personally consider it a good idea to develop it.

2. The actions we find ourselves taking could be a form of spiritual guidance — sometimes we do act unconsciously in ways that serve us

I barely registered that I was uneasy about this lamp. I just thought I was being paranoid. I am guessing this vague unease that was barely conscious, and the subsequent actions I found myself taking, almost without thinking about why I was taking them, was Spirit’s way of letting me know there might be a house fire, if I’m not careful.

If you’re behaving out of character, and taking precautions you don’t normally take, and still feeling uneasy — stop and look at why that is! Unless you’re a constant worrier normally, it could be your gut telling you something.

3. Slow down for guidance!

Things have been very hectic moving into my new home and furnishing/decorating it (that was a full time job for about 6 weeks), and also very busy, helping to get the details of my new website design finalised, that I haven’t had time to focus on much else. I wasn’t paying attention to Spirit much in the way I normally do. I didn’t give myself any time to stop and notice my unease in a conscious way or to ask Spirit what that was about. I was too busy rushing around ticking things off my to do list.

4. Ask your Spirit Guides for something specific

I asked my Spirit Guides to send me something more specific in terms of a warning, in future if anything like this happens again. My warning was there, but it was somewhat vague and even slightly unconscious. Possibly that was down to me and my lack of attention or even ability to receive warnings. The Spirit world can only do so much. (At least I was there when the lamp went up in smoke though.)

Shortly before the bulb started smoking, I saw an “angel light” in the vicinity of the lamp.

“Angel lights” are what I call those coloured (i.e. white, blue, or pink) sparkling lights that appear in the periphery of your vision, flash and then disappear. Many psychics see them. (I see them maybe once every few months.) I remarked to my friend at the time “ooh, an angel light!”

He asked me what that meant, and I said it can be a “hello” from a deceased loved one, or it can be a sign that your angels are with you, or in the past I’ve also seen ‘angel lights’ when I’ve just realised something or said something that has real significance for me. (The kind of realisations that make you go ‘oooh’ or make the hairs on the back of your neck stand up.)

This article seems kind of funny now, in that I’m giving a lot of advice above that I didn’t follow myself. But I hope someone can take something positive from the article, even if I was not “walking the walk”, at the time!

Has your intuition ever tried to save your life or have you avoid a disaster? Please share in the comments!

My Injury & Journey with Overachieving
It's been a tough year: Extricating myself from a dysfunctional family system, and the loneliness and heartache that came with it; Fighting ...
4 Business & Personal Lessons Learned From 10 Years As a Professional Intuitive
In late 2007, I started giving Akashic Record Readings to the general public. It has now been 10 years since I became a professional intuitive - a...
Love & New Year Wishes from me to you + Notes from 2018
Happy New Year to all my students & readers! (Just a little advance warning for any arachnophobe readers: there is a big spider pic further...