Why I Don’t Believe in Psychic Attack 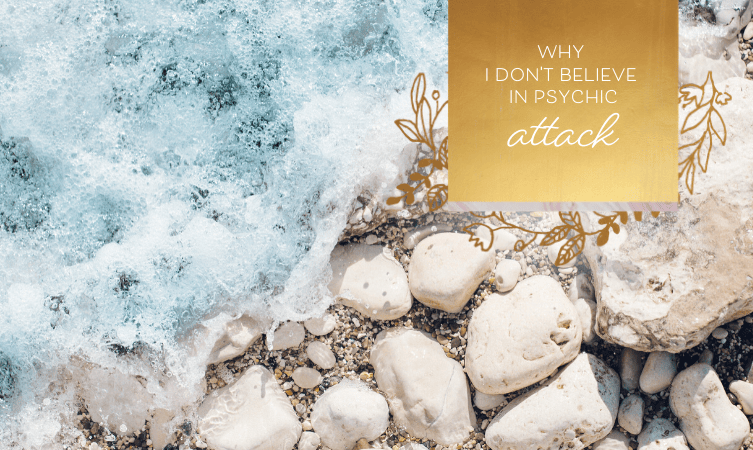 When people send me emails asking a question on the subject of psychic attack, they fall invariably into two categories:

What Is Psychic Attack?

Psychic attack is the name for the situation where a person is being psychically victimized by a dark entity or person (or the person perceives they are.)

Sometimes people believe that a non-physical entity is victimizing them. Sometimes it might be that a person believes that another person is psychically victimizing them or infiltrating their mind or energy field, against their will.

My Experiences with ‘Psychic Attack’

Let me tell you about my experiences with the idea of ‘psychic attack’.

I personally had encountered this idea of psychic attack twice before I trained as a professional intuitive.

The first time was when I was involved in an evangelical Christian church and it was basically a cult-like organisation that used fear to keep its members loyal to ‘God’ and the organisation. I only went a couple of times and attended a few Bible study meetings (that was more than enough for me.)

When I told my friend who had introduced me to the church that I was leaving, she said something along the lines of:

“The reason why you want to leave is because you’re under psychic attack from the devil, who is trying to keep you separate from God.”

Upon hearing this, I felt like I was going crazy. I was already confused – quitting that church had taken a lot of personal power and confidence that I didn’t have much of, at that time in my life.

In my view, it will undermine anyone’s mental and emotional health to worry about and focus on the idea of a devil, psychic attack, or negative beings coming to get you. Or even to believe in it.

My Second Encounter with the Idea of Psychic Attack

The second time I came across the idea of psychic attack was when I read a book by a popular author in the new-age field who writes about psychic and negative beings a great deal, and how to avoid them.  The idea in this book was that some negative beings were scary and powerful, and we have to employ ingenious ways to elude them.

Anyway, after having read this book, at first I found it liberating that the negative thoughts I was having might not belong to me. I thought, maybe they were coming from outside of me after all. I preferred to blame what might be in my environment rather than face up to the fact that I had a lot of traumas to heal.

(Plus I was an empath and I was picking up on other peoples’ negative emotions on a daily basis, which made my emotional state worse.)

Soon after I’d sort of accepted this theory in the book I had read, I began to have bad dreams. They involved evil beings victimizing me and pinning me down. The dreams were so vivid that it felt real and I was scared.  I wondered if these were the beings the book talked about.

If anything, this book caused my fear to grow. A lot.

Eventually I came to my senses, realized that I was allowing these ideas and these imaginary beings into my space.  I didn’t have another ‘pinned down’ dream after that. My personal power had grown a little through that experience – I was choosing how to see the world, and I didn’t want to see the world through the eyes of fear.

So that is why I believe that it will undermine your mental health to focus on psychic attack, negative entities or demons. My experience has taught me it is the case.

But what about those people who really do believe they’re under psychic attack?

In my experience, those people who are insistent that they are under psychic attack are unconsciously projecting their past traumas and possibly even their own shadow side onto a spirit they feel is victimizing them.

While it may be possible to rape another person physically in this plane, spiritual law dictates that it is not possible for spirits to come in and violate an incarnated person energetically, unless that person has given their permission explicitly or implicitly. You can give your permission implicitly if you believe you have no power over your own energy and surrender control.

Remember that you have the power to choose what energies you engage with.

What about being under psychic attack from other people?

Yes, some people can be draining to be around – some people like to take more than they give, and others can be abusive or manipulative, or both.

But it is up to us to have real boundaries in the physical or to make choices that keep those people at a distance or away from us altogether.

When a person lacks the personal power to stand up to a bully, stop giving, or lay down the law, the situation will drain them and they might call it psychic attack or psychic vampirism.

Let’s get real about this: there’s nothing psychic about it, apart from your own resentment or upset.  And no one can drain you without your permission.

So, in conclusion, I believe that if you perceive you are under psychic attack, you are projecting something inside of you onto your external environment.

Do some “shadow” work – explore your deepest fears and wounds; the triggers that cause you to feel powerless. Address your past traumas and heal them. Go into psychotherapy, try a cord cutting session, or do some past life regressions. Read the book The Dark Side of the Light Chasers

which features some helpful exercises you can use to release traumas, even if you are not sure what those traumas might be.

We are not here to live in fear.

(As an aside, there is a group of spirits called earthbound spirits that we DO want to avoid in intuitive development – as I mentioned in my last article, they can drain energy without meaning to, and they can amplify negative emotions if they take up residence in the aura. But they do not victimize us. Nor do they mean to cause harm. They are essentially ghosts or earthbound spirits and they can be cleared from a space or an aura.)

Psychic developers who have been traumatized in the past may see these low-vibrational spirits, as nightmarish, frightening figures. This is because we see and interpret the spirit realm through our own lens, which may be clouded by what we have experienced previously. For example, a sensitive child who grows up in a difficult or traumatic home environment (e.g. with an abusive parent) may encounter an earthbound spirit and see this spirit as something frightening (because she is frightened.) Yes, earthbound spirits can be low-vibrational, and are stuck here on the earth plane, but they only morph into frightening, nightmarish figures if we are looking through a ‘horror film’ lens. Clean up your lens and you will see the spirit for what it is – a fearful, stuck spirit who wants to move on to the other side but doesn’t know how.

Further reading on this topic:

Are Curses Real?
A small portion of the inquiries I receive are from distressed visitors, who are convinced someone has cursed them because they've had a series of...
Is It Possible to Find out Information About Future Lifetimes in the Akashic Records?
First of all, if you're reading this and you're not sure what the Akashic Records are, please visit this page for an explanation. For those of ...
Can Cats See More Than Us?
By Debra Reeves. I've always had cats. I love cats. I also love how sensitive to energy they are. A cat will come and sit on you if you’re sad....