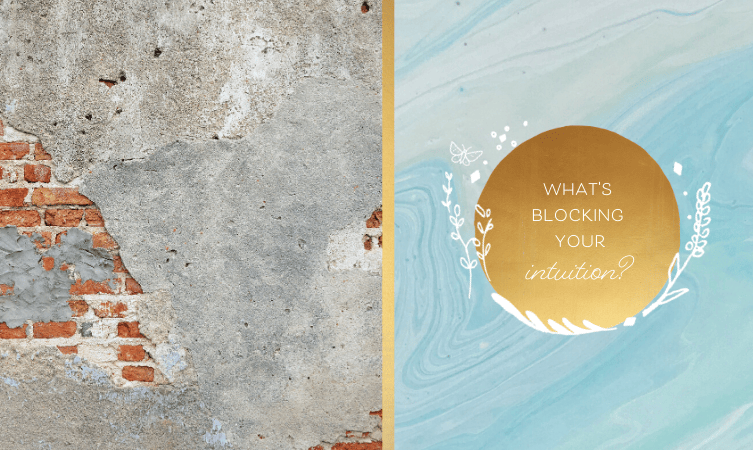 A certain proportion of my clients book a reading with me because they want to tap into their intuition but feel something is blocking them somehow. Here are the two major ‘blocks’ to good intuition that I’ve come across in healing sessions with clients. If you’re in the same situation, see if either of these strikes a chord with you…

Every one of us, on a spiritual level, knows exactly what is best for us. When it comes to making our decisions, no one knows better than us – not our parents, nor our spouse, nor our friends.

But some people hold beliefs like ‘I need the guidance of other people to make good decisions’. If such people are also trying to develop their intuition, it’s probably not working out for them. They need to shed this limiting belief first – the one I call ‘little old me’ syndrome. This is the belief that other people’s perceptions are somehow better, or clearer or more accurate than theirs.

These people who have ‘little old me’ syndrome are usually very open people and they take the opinions of others to heart. When their own hunches and impressions conflict with the opinions of those around them, they are swayed by external opinion more often than they listen to their own feelings. They also often feel a need to run things past other people before they take action.

I understand ‘little old me’ syndrome completely because I had it too. I had to have a painful experience to wake me up to it.

When I was living in the UK, I met a guy who was an intuitive and I was blown away by him. He was extremely talented and clearly could teach me a thing or two. I was about to begin training with him when I allowed our relationship to take a turn that I did not want it to take. But I saw myself being swayed by his viewpoints of why our relationship should be more than platonic. He seemed wise, intelligent and he was a gifted intuitive (he seemed to know more about me than I did!), so when he told me that it was my fear stopping me from being in a relationship with him, I decided to take a chance and see if he was right, even though my intuition was screaming at me not to. I made a very conscious decision to ignore my intuition. Within a couple of days I saw that my intuition had been for a reason. It was one risk I really wish I hadn’t taken.

But I learned a valuable lesson through this, and one I see reflected in my clients from time to time. The lesson is that no matter how wise, or knowing, or well-informed, or intuitive someone else seems – they don’t know better than you. They have their agenda. Your intuition will help you navigate your life with your own true needs and desires in mind.

This is a particularly tough lesson to learn because it goes contrary to everything we’re taught. We have been taught by religion that God knows better than we do. If it’s not God that knows better, it’s your parent, or your teacher or the education system. Even modern spirituality sometimes implies that spirit is a force, separate from you, that can guide you better than you can guide yourself. You are Spirit, just as you are physical, and so you can get the guidance you need because it’s within you.

Second Block to Intuition: Being out of Touch with Your Feelings

Recently, I’ve done a few healing sessions for clients who have been trying to hear and recognize intuitive guidance, but not getting very far. The message from their guides was the same for all three:

“You are looking so hard for guidance from outside of you, but ignoring the intuitive input that’s already there in the form of your feelings. Tune into your desires and feelings…they’re telling you something important.”

Through this, I’ve learned that…

Listening to our feelings and desires is the basis of good intuition.

But for most of us, having feelings and desires is such a mundane, non-woo woo part of life that we don’t expect feelings to have much value or wisdom. Feelings are barely psychic guidance now, are they?

Well, they may not seem psychic, but they’re perfectly valid feedback from your Higher self about the path that you’re on, and how things are going in your life, and about the way you’re seeing the world.

But what if you’re the type of person who’s totally out of touch with their feelings? This may sound an unlikely scenario to you, but one that is really quite common if my experiences with people are anything to go by.

Let’s take Mary. Mary is clairsentient, which means that she’s very good at getting intuitive guidance through her feelings – emotional feelings and gut feelings. We all feel things – but as someone who’s clairsentient, Mary’s feelings are like amplified Divine feedback about what she’s coming across and the direction she’s going in, in life.

For example: she meets someone and doesn’t feel good about that person at all and later she finds out they’re a swindling ratbag. Or her parents want her to go and study nursing at school, but she wants to study acupuncture. She applies to study nursing, believes it’s a more prosperous career but then she begins to feel so awful about it. She knows that her feelings are telling her to back up and go down the road she really wants to go down.

If Mary was in intuitive integrity, she’d heed these messages, wouldn’t she? But the thing is…

Let’s say Mary’s parents were a tad controlling when she was growing up. They thought they knew what was best for her and they made lots of decisions for her. Mary had her own feelings about things, but to please her parents, she ignored this feedback and did what her parents wanted instead. Being a people pleaser, she didn’t want to rock the boat.

So, now she’s left home and her parents aren’t there to tell her what to do so much, BUT the thing is, she can’t tune back into her feelings to know how she really feels about the paths ahead of her, because she’s been tuning her feelings out for so long, she’s a bit numb actually.

If her feelings are the compass she was born with to show her where to go, she’s lost her emotional ‘true north’.

The bottom line is, if you’re someone who tunes out and ignores your feelings to please other people or get ahead on a path someone else has chosen for you, then your psychic ability is not going to develop fully until you tune back into them and honour them. That’s your starting point.

This is because when you ignore or bury feelings (internal guidance), you broadcast to the Universe that you’re not ready to hear other, extra-sensory input and feedback, which is at odds with your intention to develop psychic abilities. So, you’ll be sending out mixed signals.

On the other hand, honouring your feelings builds the foundations of your psychic ability. If you don’t honour them or listen to them, you’re building intuition on shaky, unappreciated foundations.

Do either of these apply to you? For me, a big part of developing my intuition was in ‘realigning’ myself with my own truth and perceptions.

How to Distinguish Intuition From Imagination
I recently received a question from a reader: "I can't distinguish between real spiritual input from my guides and other stuff, like imagination....
What is Intuition?
In this post I explore what intuition is, including the differences between intuitive abilities and psychic abilities, because many people do not ...
How to Connect with Your Higher Self
Your Higher self is the spirit part of you that is said to 'reside' in the Ether (the non-physical realm). It's your Divine spark. This part of yo...