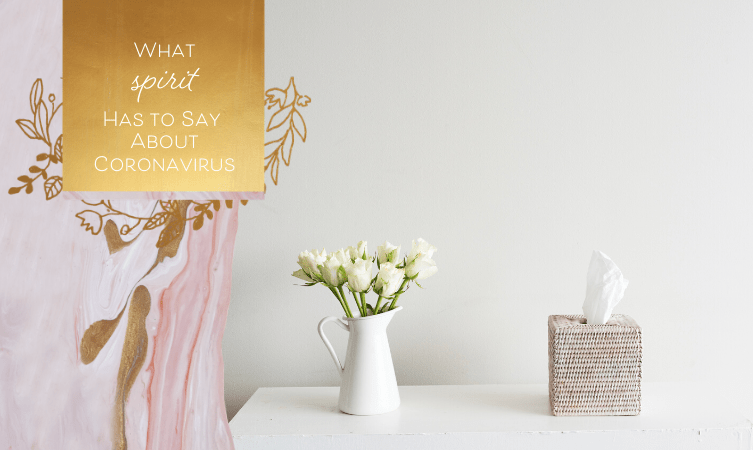 I’ve recorded a little video about coronavirus, which goes into:

(If you’re not interested in the empath stuff & just want to skip to the channelled info regarding coronavirus, you’ll find that info 6:30 minutes into the video.)

First of all, I hope that you’re all keeping well and that if you’re self-isolating, that you’re not feeling too bored or constricted at the moment. Personally, I’ve gone into self-isolation as of this week, mainly because I’m asthmatic and I get quite bad post-viral asthma.

So I’m taking it quite seriously and working from home at the moment. But I work from home anyway, so it isn’t too much of a change for me.

I just wanted to talk a little bit about empaths and what is going on in the world at the moment for all of us and the impact on empaths. If you follow my work, you know that I talk a lot about empaths. I’ve written a book for empaths. (It’s called The Empath’s Toolkit.)

So for most people, emotions can be contagious anyway, so if we’re around people who are panicked or anxious, then we start to feel panicked or anxious. When you’re an empath, this effect in humans, of sort of taking your cue from other people, is amplified. You pick up on other people’s emotions much more readily than non-empaths would, and they can affect you more severely.

So, as an empath, when you are picking up on people’s emotions in this way, it can leave a trace energetically in your own energy field. This is what leads to empaths feeling quite burdened energetically.

In my book, ‘The Empath’s Toolkit’, I actually break this down into a few different types of negative energy that I’ve come across in empaths’ people’s energy fields…

One of the types of energies I often come across is something called ‘emotional residues’. An emotional residue is essentially the energetic residue of emotional energy that we pick up from other people and it can stick with us as empaths.

For example, if you’re in the grocery store and you’re surrounded by people who seem bewildered or panicked or anxious and they’re kind of grabbing everything, that energy can leave a trace in your energy field as an emotional residue.

It’s good to clear out these emotional residues. I talk about this more in my book and I give instructions for clearing out your energy field. As an empath, I do that on a regular basis pretty much daily, especially at the moment. So that’s something I recommend for empaths.

A psychic tie is like a tiny telepathic tie between us and another person.

These psychic ties are not energetic cords. (We think of energetic cords as being these large and negative attachments that can exist between two people.) But a psychic tie is actually a small attachment that forms between you and somebody that you’ve interacted with, even in a superficial way during your day.

It doesn’t necessarily have to be a significant relationship. It’s just an energetic reflection of the interactions between us all. Most people tend to rack up a lot of these tiny psychic ties and they look like very thin energetic ties between us.

When you’re an empath and you have a lot of these psychic ties, it can actually lead to you feeling quite burdened on the energetic level. So that’s another thing that I recommend that you clear, preferably on a daily basis as an empath. That’s something I go into in chapter one of my book as well.

What I’m leading up to with this is: for the next 48 hours (UPDATE: I have decided to make my book, the Empath’s Toolkit, free for 48 hours instead! And this promotion ends on March 27th at 12am PST.)

So if you’re an empath who feels quite burdened or anxious at the moment, just know that that is completely normal. I think that a lot of people are feeling that way. I’m not promising that these exercises are going to completely remove all your anxiety, but I do think that they can help you to feel less burdened and less overwhelmed.

And then finally, I just wanted to share some information about this pandemic in general that I picked up on when I did a reading for somebody.

So the first thing that Spirit said (and this is unprompted – I didn’t even ask, but probably because it’s been on my mind an awful lot…), they said that lots of people in the world need to change their day to day habits, their personal habits, into something that is healthier and more sustainable for them.

But also for the individual. I got the sense that Spirit was telling me that our habits are not sustainable for ourselves. That we’re not getting enough time with loved ones. That our health is suffering. That sort of thing.

And I don’t know whether that is the purpose of this pandemic or whether it’s a happy side effect of this pandemic. Spirit was not specific about that. I suppose how you think about it depends on whether you believe that these events are fated or not.

Personally, I do tend to believe that big events like this are somewhat pre-organized, but it’s up to you, what you think about that.

I also get the sense that the self-isolation that many people are going to be engaging in is something that will give people the space to get off the path that they’re on and get onto a different path.

So it’s not just about being forced off a path onto another one. It’s about having that time and that space, for some people, to reflect on where they are right now and whether it’s working for them.

It feels like a case of souls saying, “Stop. Stop the planet. I want to get off.” And sort of saying that en masse.

So that’s the second thing that Spirit told me.

The third thing that Spirit passed on is that we as a people, as a society, we are anchoring in the energetic quality of unity during this time, so a greater focus on community.

If you look at that word ‘community’, there’s that word ‘unity’ within it. So, we have been very globalized as a society and during this pandemic, we’re obviously going to be focusing on the local. We can’t move around so freely. And we have to depend on one another more.

So that’s how we’re going to anchor in this energy of unity.

Spirit told me that we need that energetic quality to prepare for other events that will come in years to come.

I don’t want to scare you when I say that. I don’t kind of get this sense that Spirit is saying that this is going to be a regular occurrence, this is going to happen a lot from now on, or anything like that. But for some reason, anchoring in this energetic quality of unity is important at this time.

So that’s what Spirit passed on to me and I just wanted to pass it on to you in case it was of interest or relevant to anybody reading this.

I hope that you stay well and not just physically but also mentally, because I know that isolating ourselves can definitely take a toll.

Pick up a copy of my book, The Empath’s Toolkit, on Amazon.com, free for the next 2 days only. This promotion ends on March 27th at 12am PST.

Please do share this post with any empaths you know who could benefit from some support right now.

The Hall of Akashic Records
The Hall of Akashic Records is an energetic ‘place' or realm which holds all the memories and records of our souls. All the events, words and thou...
How Angels Work
Note from Anna: This guest post is by Bonnie Kelso, Artist, Creativity Coach and Reiki Master. It's a great illustration of how angelic energy wor...
Why I Love Space Clearing (Ghost Stories Included)
Since I became a professional intuitive over a decade ago, I've had plenty of emails from energetically sensitive folks (and parents of sensitive ...