What Is the Difference Between Psychic and Intuitive? 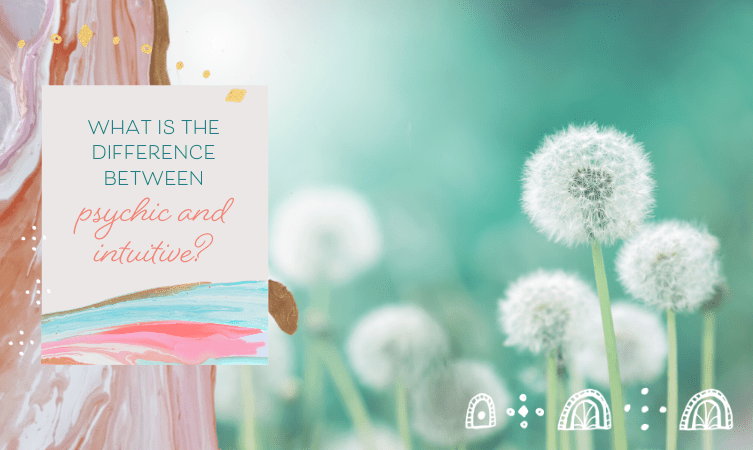 For years I’ve referred to people who share their psychic gifts as ‘intuitives’ rather than ‘psychics’ to avoid the troublesome connotations that the word ‘psychic’ has.

Is this just a matter of semantics or do you see fundamental differences between psychics and intuitives (and empaths)?

Thanks for sending in your question. You’re the second person who has asked me this in the space of a few days so I figured it was time to answer it on my blog.

Fundamentally, there is not much difference between a psychic and an intuitive. When you think about the word ‘psychic’, fortune-tellers and crystal balls may come to mind. But at its root, the word ‘psychic’ does not necessarily refer to fortune telling – it is from the Greek, and simply means ‘of the soul’. So when I use the word ‘psychic’, I am referring to guidance that comes from your soul and the spiritual realm, or someone who can channel such guidance.

And again, intuition is the means by which the higher self communicates with us – it is a function of the soul. So not a whole lot of difference there between the two, at first look.

The only minor difference between the two that I am aware of, is that psychic gifts are thought of as being clairvoyance and clairaudience (clear-seeing and clear-hearing, so that means receiving guidance through one’s inner ear or mind’s eye.)

These might be considered the more flashy and dramatic ways to get spiritual guidance. So if someone calls themselves a psychic, the connotation is that they are likely to use either clairvoyance or clairaudience, as part of their skill set.

So if someone calls themselves an ‘intuitive’, it’s more likely that the person uses clairsentience or claircognizance as part of their skillset.

I changed the name of my ‘Psychic Awakening’ Course several years ago, to ‘Intuitive Awakening‘ for this very reason. And in that course, I teach students to identify and develop any and all of their gifts, which include clairvoyance, clairaudience, clairsentience and claircognizance. So you can see that the distinction I made above doesn’t always stand.

Personally, I don’t dislike the word ‘psychic’ when used among those who understand and are open to the work I do. But it can make a bad impression among those who have little understanding of the spiritual world. So that is why I changed the name of my course. And I know other psychics who label themselves ‘intuitives’ for the same reason.

Robert, in your question, you mentioned the word ‘empath’, which is a different thing altogether.

An empath is someone who has a psychic gift which enables them to ‘feel into’ and put themselves in the shoes of another person’s experience. An emotional empath, for example, is able to explore someone’s emotional experience, and may come away from that affected or burdened by what they have explored.

Note that this is a gift that goes beyond the conventional type of empathy that the majority of human beings experience. Most of us will wince if we see someone else undergoing something painful, for example: an operation without anaesthesia. Or to give another example, we may feel a sense of trepidation when we see a stunt artist walking a tightrope between two high rise buildings.

Here’s a couple of examples of the latter in action:

An empath client of mine once told me a story about a rather dramatic example of her emotional empathy in action:

Right after her daughter “Alice” set off on a long road trip in a mountainous & sparsely populated area of the South Island of New Zealand, Jenny began to feel an unusual sense of dread and panic. She knew it was related to her daughter and she couldn’t shake the feeling or get in touch with her by phone. So, even though it was late at night, she decided to just get into her car and drive in the same direction her daughter had taken on her trip. Jenny had no idea what she was doing, but she knew she just had to get in her car and go.

After driving for about half an hour along the route she knew Alice would take, she saw some lights down an embankment in the dark – it was her daughter’s car. Alice’s car was teetering close to the edge of a hill.

Her mother believed that as an empath, she had been picking up on her daughter’s terror and her heightened senses alerted her to where her daughter was trapped. Luckily Alice had not been injured and was rescued by the emergency services.

In a less dramatic example, I used to coach students over the phone in a 6-week long program to connect with their Spirit Guides. Before each call, I used to ‘tune in’ to the student’s Spirit Guide team and upon doing this, I would also feel how the student felt at that moment and get a sense for what was going on in their lives. I would know whether they were doing well or if they were struggling. This was not something that happened to me consciously – it was simply what would happen when I tuned into the student from a distance, to connect with their guides.

It is not unusual for emotional empaths to have experiences like the two I mentioned above.

There are other forms of empathy, too, such as physical empathy, psychological empathy and more. You can read more about those here: What Kind of Empath Are You?

So being an empath is different from being a psychic or an intuitive. Psychics and intuitives receive information through various clairs, from the spiritual realm (i.e. Spirit Guides & the Higher self). Whereas empaths receive information from a person’s energy field, and they receive such information by experiencing it as if it is happening to them. Empathy is a form of clairsentience, but a kind that has a person feelings things vicariously.

I prefer the word ‘sensitive’

The blanket word I prefer these days is ‘sensitive’ – because it encompasses ‘psychic’, ‘intuitive’ and ’empath’ and it doesn’t have as many negative connotations.

Over to you – what do you see as the difference between these two terms, and which is your preferred one?

Seeing faces of people you’ve never met before, while meditating
“When I meditate, I often see faces of people I don’t recognise, flashing through my ‘mind’s eye’, one by one. What does this mean?”
Question from a Reader: How Do You See Ghosts?
Hi Anna, I am currently living in Shanghai with my wife. There are a lot of spirits here! I had an odd occasion a few months ago. I woke up to...
What Does It Mean When I ‘See’ Sparkling Lights or Columns of Light With My Bare Eyes?
I believe that there is a non-physical world, made of energy, superimposed over the physical world. When you have a third eye chakra that is very ...