We Weren’t All Cleopatra: 3 Things I’ve Learned About Past Life Regression 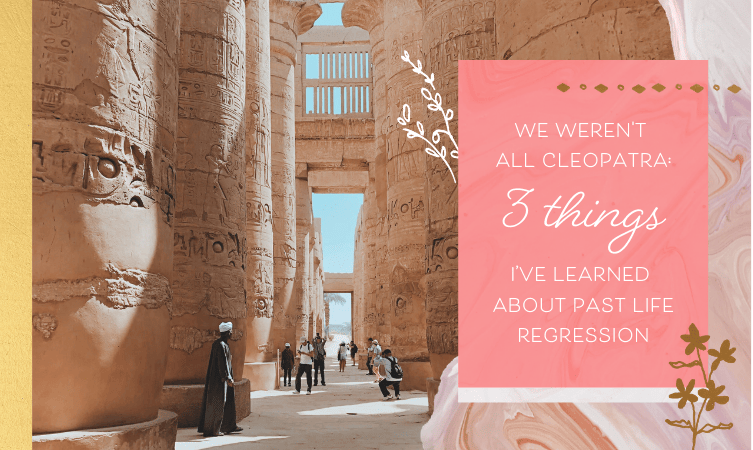 As a student (and client) of past life regression, I find this discipline to be endlessly fascinating and a source of great learning.

This article is part one in a three-part series of what I’ve learned so far on my path:

We Weren’t all Cleopatra

My experience of having and doing past life regressions shows that most lifetimes are ordinary ones, and yet often extraordinary at the same time.

The age-old themes of love, loss, survival, injustice and hatred tend to be very prevalent during regressions.

My most recent practice client was a female in her 40s. During the regression she found she was a German soldier in WW1 who had a foot blown off in the trenches. She survived the war and met the love of her life, and lived happily ever after (notably, the male love of her life in that lifetime is her best female friend in this one!)

In another lifetime, the same client was an American woman born to a wealthy family in New York in the 1700s, who felt passionately about women’s suffrage and women’s working conditions. Her views were so inconvenient to her husband and social circle that her husband moved the family out to Ohio, where she became an alcoholic, and wrote articles on women’s rights that no-one got to read, and died hoping that her daughter would care about women’s suffrage and fight for it, too.

Usually, the past lives that we go into have traumatic aspects to them (and this is why they come up in the first place.)

My past lives have involved:

During a regression, your Higher self will often pick the lifetimes that are most harrowing and traumatic to explore, precisely because once they are cleared, it can make the most difference to your life.

This was the first in a series of articles about past lives. You can read the next two articles in the series here and here.

What Have You Learned in Your Past Lives?
Did you know that you’ve been working on yourself for many lifetimes? Your soul has been learning its lessons for centuries, if not millennia. ...
Where Are You On Your Soul’s Journey?
Here is part two in a three part series of what I’ve learned so far about past lives. During my studies in past life regression, I have ask...
I Went to the Afterlife and Back
Have you ever wondered what your life purpose is? What the meaning behind some of your more challenging experiences in life might be? Who you were...