Do We Have a Twin Flame or Soulmate? 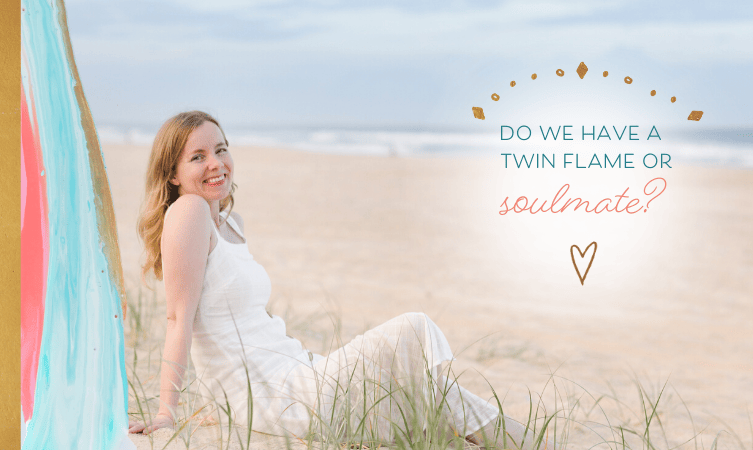 I recently received an interesting question from a reader:

“In one of your articles, Anna, you said that you don’t really believe in Twin Flames.

And I would so much want to hear your opinion about twin flames phenomenon – what you think of this and why you don’t believe in them?

If twin flames (as in, one soul in two bodies) don’t exist, then how do you explain this type of connection that goes beyond a soul mate connection?”

Thanks Sofia for your question.

I don’t believe in twin flames, but I do believe in soulmates. In this article, I’m going to explain why.

The Origin of Twin Flames

This concept of twin flames can be traced back to the Ancient Greeks. In Plato’s philosophical text the Symposium, the character Aristophanes seeks to explain why people seek their “other half” and feel whole when they’re in love.

He jokingly puts forward the idea that in primitive times, human beings were contained in one body, but had two faces and two sets of limbs. These creatures became so powerful that the God Zeus wanted to blast them with a thunderbolt to kill them, but instead, he split their bodies in half, separating them forever. When these two separated parts find one another again, they finally feel whole and never want to be separated again.

Scholars believe that this part of Plato’s text, with its description of cart-wheeling people with two heads and two sets of limbs, is actually meant as satire or comic relief.  But this idea that there is one person “meant” for us, with whom we will feel whole and complete (essentially our “other half”), nevertheless has caught on in popular culture and new age theory.

Personally, I don’t believe that another person holds the other half of our soul.

On the other hand, I DO believe in soulmates.

This belief is based on my experiences doing romantic relationship readings for others, experiences as a past life regressionist in training and as a client, and as a reader of various new-age authors.

One of the new-age authors whose findings about soulmates make the most sense to me (and which most closely reflects my own experiences, professional and personal) is Michael Newton. Michael Newton was a hypnotherapist who regressed clients to the ‘bardo’ – the place in between lifetimes, where souls plan their lives on earth and undertake a life review. He researched the nature of the afterlife and built his theories based on his clients’ accounts of what happens between lives, and was amazed at how similar the responses were.

(If you haven’t read his work before I highly recommend it.)

In his books Destiny of Souls

and Journey of Souls

, he explains that we have a group of souls with whom we work closely on the other side. We incarnate primarily with these souls, over and over, and they show up as our friends, lovers, and sometimes family relationships. These are the souls with whom we will be closely bonded in this life. Some people call this group our ‘soul family’ and there tends to be between 5 and 20 souls in this group.

These souls are your soulmates. Some of them will be closely bonded to you for life, while others will come in just for a while. These souls embody energies that you benefit from, and are lacking in yourself, and you will embody energies that the souls around you need and benefit from. So for example, perhaps you bring loving, gentle energies and the people around you are reminded to be kinder to themselves and others when they’re with you. If a close relationship, past or present, has taught you something that helped you to evolve, change or become a better person, that person is likely to be a soul-mate of yours. We all teach one another in this way.

Sometimes these souls may come in to teach you something specific in a short amount of time, and the relationship might even be an unpleasant or tumultuous one. I had a few disastrous relationships with men in my early twenties which set me on the path I am on now, and although they weren’t easy or pleasant, they did teach me something about who I am and what I believed about myself back then.

So, I do not believe there is one soulmate that you must be bonded with in a romantic way. I do believe that there does tend to be one of our soulmates with whom we do more of our spiritual evolution work, than the others – but the type of relationship does not have to be romantic. If it isn’t romantic, it could be a family relationship or a friendship instead.

In my view, the feeling of bliss and wholeness that comes from meeting a soulmate can come from falling in love, or it can come from the fact that we may have spent many lifetimes with these souls.

As an exercise which demonstrates the power of these bonds, think of a family member or someone you have grown up with (someone you love) – perhaps a parent, sibling or cousin. When you bring this person to mind, you might feel the bond, sense of belonging and the good memories that the connection holds for you.

Now imagine multiplying that feeling 10, 20 or 30 times over. Perhaps your sister in this lifetime has also been your lover or spouse in several lifetimes, and also at times your friend, sibling, or your parent. These are strong bonds, and when we meet a soulmate we can feel or ‘remember’ those bonds – we recognise these people.

In my view, the more limiting aspect about this idea of a twin flame is the idea that someone else can complete us or make us feel whole, and in the absence of that person, we are not whole.

Although people can enrich our lives through their presence, I believe that we are all whole souls, and ideally we will bring a sense of that wholeness to our relationships. I also think that we tend not to feel permanently complete or satisfied, in a relationship or out of it. There is always something more that we will be seeking or wanting and that is the nature of being human. Therefore, if we feel dissatisfied in our lives, this does not necessarily mean that we haven’t yet found someone who is right for us, romantically speaking.

Over to you – do you believe in soulmates or twin flames? What experiences have you had which inform your beliefs?

I’d love to hear from you about this fascinating topic.

3 Mindsets to Maintain Healthy Boundaries in Relationships
When I talk about maintaining healthy energetic boundaries, I mean defining what is your responsibility and what is the other person's responsibil...
3 Blocks That Stop Us From Hearing Intuition in Relationships
Sometimes it can be difficult to listen to, and trust our intuition in the area of relationships. Even professional intuitives have a hard time...
How to Stop Attracting Mr/Ms Wrong
When clients have booked a reading with me in the past, it was often because they really wanted to find their ideal match but kept attracting Mr/Ms ...