Is It Time to Come Out of the Spiritual Closet? 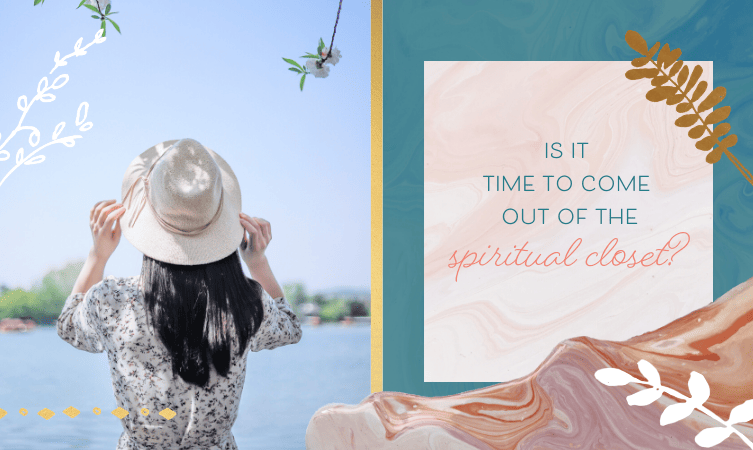 I recently received a question from one of my Akashic Record Reading Program students.

“Sarah” is currently learning to give readings professionally and she says:

“I am worried about coming out of the spiritual closet. Soon I will be ready to actually go out and give readings professionally…I’m already feeling a little unsure about how to navigate that.

What do you suggest in terms of having the confidence and courage to go out and be seen doing this work in the world?”

I wanted to answer this question here on the blog because I know I have quite a few readers who are intuitives in training who may also be concerned with this.

OK, so I want to start by telling you about a particularly unpleasant experience around coming out of the spiritual closet, that really stuck in my memory (yes – let’s just jump in at the deep end 🙂 )

About 11 years ago, I went on holiday to the South of France with some Uni friends. We were eating in a restaurant and I went to the loo. As I came back up the stairs, I heard my friends badmouthing me and talking/laughing about what a idiot I was for believing in Spirit Guides and chakras.

It was a pretty mortifying moment walking in on a conversation I was not supposed to hear. But it also made me realise the following:

People who judge you because of your spiritual or religious beliefs do not deserve to be in your life.

On the other hand, people who are decent and kind will respect you and your beliefs. If they don’t share your beliefs, they will have a ‘live and let live’ attitude and they certainly won’t badmouth you behind your back.

Obviously, you want people around you who fall into the second group.

And the great thing about being ‘out there’ in the world doing spiritual work is that those people who are intolerant (like militant atheists or fundamentalist Christians) will often remove themselves from your world when they realise what you do. This is a positive thing because you do not want such judgmental or intolerant people in your life.

It is also clear that your experience coming out of the spiritual closet will depend on who you have around you.

The experience I mentioned above was totally a product of the setting I was in a decade ago.

I went to one of the top universities in the UK and I didn’t enjoy the company of some of the people I met there. This was partly because I encountered quite a bit of intellectual arrogance – people who felt that through science or Christianity, they knew everything they needed to know about life and the Universe. It was quite a traditional and conservative place to go to school.

Most of the people I met during that time went on to pursue careers in fields like banking, politics, the Church, and the corporate world in general.

(It is no wonder I was a fish out of water. As a non-conformist spiritual person, I just did not fit in there!)

My experiences after I graduated have been quite different

It is on my house sitting profile (I am a full-time house sitter at the moment.)

It is on my online dating profile.

I tell strangers that I meet during conversations when I am asked what I do.

I also have met people who have no interest or belief in spiritual stuff, and with whom I do not really share that part of my life.

The thing all of these people have in common is that they respect other peoples’ spiritual or religious beliefs.

I am sure there will be people I never hear from who don’t agree with what I do, but those people don’t show up in my world and haven’t for years.

I recently did an interview with the psychic-medium Amanda Linette Meder and it sounds like she has had similar experiences, too. I asked her:

When you first started this work, what was your biggest fear and what helped you overcome that fear?

My biggest fear was that I wouldn’t be able to find a boyfriend.

Dating was hard enough as it is, so I gathered that me coming out as a medium would make things more challenging –  more awkward first dates and making it harder for me to find a soulmate.

But thankfully – I was completely wrong.

Being yourself actually makes it easier for you to find your soulmate, as people can see the real you, sooner. So it actually saves way more time on the dating scene and I’ve found it brings more authentic connections with people.

Truth be told, I’d found dating to be easier out as a psychic-medium more than I ever had before.”

What About Family Members?

Something I haven’t mentioned is that I have also lost many family members through the process of becoming more authentic as a person and this definitely had something to do with coming out of the spiritual closet fully.

I am one of five children but I have been estranged from my entire family of origin for a long time (the only people I am in contact with are my brother’s ex-partner and her children – my two nieces).

But this is not a bad thing and it did not happen JUST because of my beliefs or work.

I grew up in a psychologically and physically abusive family and it became clear that those people who were abusive were not going to change, so I removed them from my life. Not just because they said horrid things about my work or my beliefs but because some of them were abusive in general. The comments about my work were just one small symptom of the overall pattern that had been there for my whole life.

So if you have toxic people in your life like I did, and you come out as a spiritual person or worker, things may suddenly become a lot more challenging because you are being authentic and such people don’t respond well to that, and either those relationships will become healthier and the other person will learn to become more tolerant, or those relationships may die as a result.

What about being a little bit out of the closet?

Some of my students choose an alias (i.e. a different name) to do readings via the internet, because they want to keep their work and beliefs private from their boss, co-workers, acquaintances or whoever. There is nothing wrong with this. It is up to you to decide what is right for you.

I also considered going down this route when I had a brief stint teaching languages part-time about 7 years ago. At this time, I actually legally changed my name from the name I was born with to Anna Sayce (Sayce is my grandmother’s maiden name) to give me an alias.

But in the end, I decided to only use the name Anna Sayce. Letting go of the name I was born with felt like a powerful symbol of letting go of the people who would have preferred me to be someone other than who I was.

Hopefully this has been helpful for someone out there. Please leave any comments below.

My Injury & Journey with Overachieving
It's been a tough year: Extricating myself from a dysfunctional family system, and the loneliness and heartache that came with it; Fighting ...
Gifts from a Disaster
Three weeks ago, a major earthquake hit my home city of Christchurch. In three short weeks, I witnessed destruction, and death. I learned that tim...
Connecting with the Dead Through Dreams, Synchronicities & Mediumship
Nine months ago, my beloved cat, Big Boy, passed away. I had never lost anyone so close to me (at least not through death) and I was devastated. F...