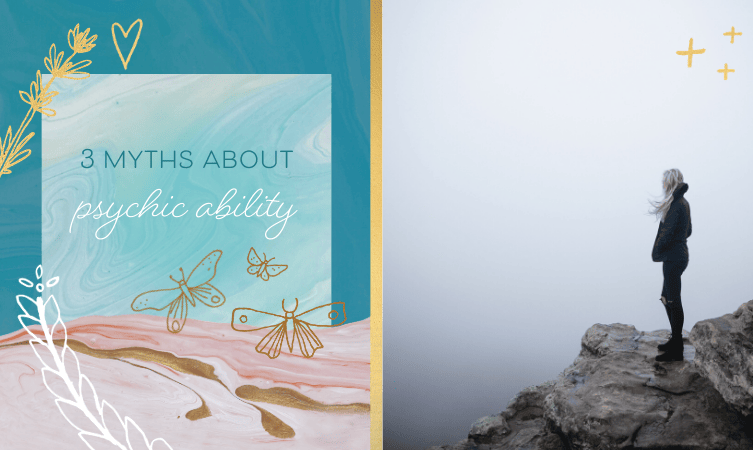 Clients often ask me ‘do you really think I could develop some psychic ability?’

We all have the potential to be gifted psychics. Your intuition is your birth right, but for many of us our psychic senses diminish in childhood as they are not nurtured in the same way that our five physical senses are. Those who are psychic have either:

I definitely fall into the second category of people (those who have worked to consciously develop their psychic ability). I shut off my natural psychic awareness around the age of six or seven. I remember seeing spirits around that age. My mother told me that my experiences were just imaginings and since I was not the kind of child who liked to go against the grain, I took this to heart. As a result I just stopped engaging with the energies around me.

My psychic re-awakening began with a bump in 2007, when I trained as a professional intuitive.

One night I was rudely awakened by a spirit who presented as a dark haired man, in his thirties. And the following happened in a flash:

The spirit of this man showed me an image (like a movie image) of him in a caravan with a woman who appeared to be his wife. The man got out of the caravan. My boss at that time got into the caravan with the woman and replaced the man. The man gave me this message: “I was not able to take my wife on holiday, but I am so glad your boss did”.

I was shocked and excited that I had had an encounter with a spirit but I did not know who the spirit was or what his message meant. I knew I had to relay it to my boss.

So, the next day, I put my apprehensions to one side and told my boss about what had happened in the night. He was amazed and proceeded to explain that the spirit was undoubtedly his wife’s first husband, who had died several years earlier.

My boss’s wife and her first husband (the deceased spirit) had always planned to spend time travelling around the US in a caravan but their dream was never fulfilled as he became ill and later passed away. When she met her second husband – my boss – they made the caravan tour that she had been unable to make with her first husband. I couldn’t believe what had just happened to me! I didn’t consider myself psychic or gifted and all I had done was set an intention and do a little psychic development. This story is proof that anyone can reawaken their psychic awareness, with quite stunning results.

Myth # 2: Psychic Development is Scary Because You Have To Communicate With Spirits

I remember being really terrified at the thought of opening up my psychic awareness again. I didn’t want to talk to spirits or see them – I was afraid of being startled.

Talking to disembodied spirits and seeing them is a big aspect of psychic awareness. But I later learned that there are other ways to tune into Spirit. Psychic awareness can also be gut feeling (clairsentience), an inner knowing (claircognizance) or listening to your inner voice (clairaudience).

If you’re a beginner in psychic development, you can begin by tuning into your own Higher Self. You don’t have to talk to disembodied spirits to do that.

Your Higher Self is already communicating with you constantly – whether you are perceiving it is another matter. If you’re stuck in a job you hate with no escape in sight, your Higher Self may whisper to you ‘you know this job isn’t for you…why don’t you pursue your long-term dream of becoming a writer?’

This sense of knowing that you’re not fulfilling your purpose by working in a job you hate is just as much part of your extra-sensory perception as clairvoyance is.

You can begin developing psychic awareness just by allowing your Higher Self to guide you. Take note of what feels ‘right’ to you, on a deep level and take action accordingly. It is one thing receiving intuitive guidance, but acting on that intuitive guidance is something else entirely and can take a great deal of courage at times.

Myth # 3: All psychics are clairvoyant by definition

Before I trained in spiritual healing, I thought that all psychics had to be clairvoyant. This was mostly because many professional psychics are natural clairvoyants. I’m not among them. My clairvoyance has developed over time, but my strongest intuitive gifts are still clairsentience (gut feeling, empathy, the ability to ‘feel’ what aligns with my spirit, among other things) and claircognizance (the ability to ‘download’ information from Spirit).

But I didn’t realize I had these gifts until I started my training. And I’m not alone in being primarily clairsentient and claircognizant. Several months ago, in my readings, I undertook to find out from clients’ Akashic soul records which psychic gifts they use to receive information from their Higher Self. I found that most clients do not primarily utilize the gift that we normally associate with being psychic – clairvoyance. Over the last several months around 35% of my clients have been primarily claircognizant (this means that their strongest natural psychic ability is claircognizance), 30% clairsentient, 30% clairaudient and only 5% of the people I read for were clairvoyant.

Many people haven’t heard of clairsentience and claircognizance (and few have heard of clairaudience), which is interesting because according to what I’ve seen over the past several months, these psychic gifts are so much more common than clairvoyance.

Does this mean that the people who aren’t naturally clairvoyant can’t be gifted psychics?

No, what it means is that most people have a different psychic skill set from the one we’re used to hearing about most – clairvoyance. But clairvoyance is not the only skill to develop. Clairsentience, claircognizance and clairaudience are equally valid intuitive ‘vehicles’ too.

So now when clients ask me “do you really think I could be psychic?” my answer is always yes, if you can do the following: identify your strongest psychic gift , honour and acknowledge the guidance you receive through that intuitive ‘vehicle’ and then make time to consciously develop it .

The rest will follow. Once you honour and develop your primary gift, you will find that other skills that once weren’t so natural to you will develop as well.

Hi, I’m Anna Sayce! My purpose here on this website is to provide practical techniques and information to help empaths to understand, and fix the root of their energetic overwhelm & also to help sensitives to embrace and develop their intuitive gifts. I believe that developing our spiritual & intuitive side is very powerful and allows us to improve our own lives, and if we wish, even make the world a better place for others. Discover more >
New Posts →

My 5 Favourite Daily Practices for Spiritual Connection & Manifestation
How do you connect spiritually to get guidance? In this article I want to share my own personal spiritual practices. Why Have A Spiritual Practic...
Which Is Your Strongest Intuitive Gift?
If you've read any of my other articles you'll probably notice I've been banging on about the importance of finding out your intuitive gifts. This...
Spirit Guides & How to Work With Them
We are all blessed with Spirit Guides who surround us and support us. We usually have between four and seven guides in our inner circle. Our prima...