My Transformation to Anna Sayce 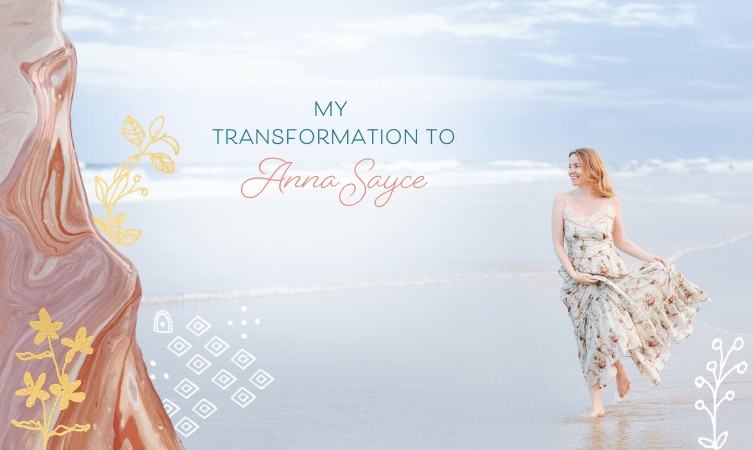 One of the things about being in business that I have noticed is that if you have a business like mine, your business has to evolve with you. It is an expression of your energy and creativity in the world.

When you change, your business has to change too, otherwise it becomes stuck.

This is where I am at now.

In February 2012, I shut down my business as I waited here in New Zealand to hear about the outcome of my business visa (I am originally from the UK and was seeking to emigrate here.) I was not allowed to work during this five month period because of visa restrictions.

Taking this time out allowed me to go deeply into my dark night of the soul, into the most painful period of my life yet.

The dark night of the soul happened for a number of reasons.

I grew up in a deeply dysfunctional family which was abusive in a number of ways.  The thing about living with abuse from a number of people for a very long period of time is that you often don’t know you are. You come up with excuses for the behaviour. You learn to tiptoe through the world, trying not to make other people angry. You know that you have issues with self esteem, co-dependence and sex and being out in the world close to other people.  But you think you must have been born that way. Gradually it dawned on me that this was not the way I wanted to live anymore. I didn’t want to be in my family of origin anymore.

I also could not work at the time, and I knew in my heart that I belonged here in New Zealand, yet I did not believe I would get the visa or that they would let me stay. My whole family emigrated to New Zealand without me when I was 18. I went through the pain of having been left behind. And now here I was ten years later, having to fight the immigration authorities at every step of the way who challenged my business and whether it merited being granted a visa for.

My heart broke. I felt homeless, countryless, familyless and unemployed for five months.

I went so deep and dark into it that I was afraid I would not come back. My grief was such that I didn’t want to continue living anymore.

When I came through, I had a new country, I had no family but I was free, and I got my work back.

But not being the same person as I was before, the work and the website felt like it belonged to someone else.

I am not Anna Conlan anymore

We all change throughout life because of the things that happen to us.

My change was represented rather beautifully by a name change that happened in late 2011.

I changed my name from Anna Conlan (the name I was born with) to Anna Sayce, which was my grandmother’s maiden name.

This change came about BEFORE I realised that I could stay in New Zealand by getting a business visa.

I thought I would need to train as a teacher and work in my business on the side, in order to be able to stay permanently in New Zealand. I wanted to keep the teaching profession (that I thankfully never needed to go into) separate from my website. In teaching I would be Anna Sayce and on my website I would be Anna Conlan.

Now I am fully letting go of Anna Conlan.

She broke apart some time in the middle of 2012 and Anna Sayce was born.

I will spend the next few months adapting my website to reflect who I am now – humbled, kinder to myself, free of abusive attachments, and more space in my heart as a result.

What the Earthquakes in New Zealand Taught me about Fear
In February 2011, there was a large earthquake in Christchurch, New Zealand. I was living in Christchurch at the time. I moved to Christchurch in ...
A Spiritual Journey Around New Zealand - A Photo Diary
From time to time, readers of this blog email me letting me know that they will be visiting New Zealand (or planning to emigrate here) and asking ...
3 Life and Productivity Lessons I Learned from Creating the Intuitive Awakening Course
In case you’re new here, let me tell you about what I’ve been doing since September 2009.  In short, I’ve been creating the Intuitive Awakening Co...