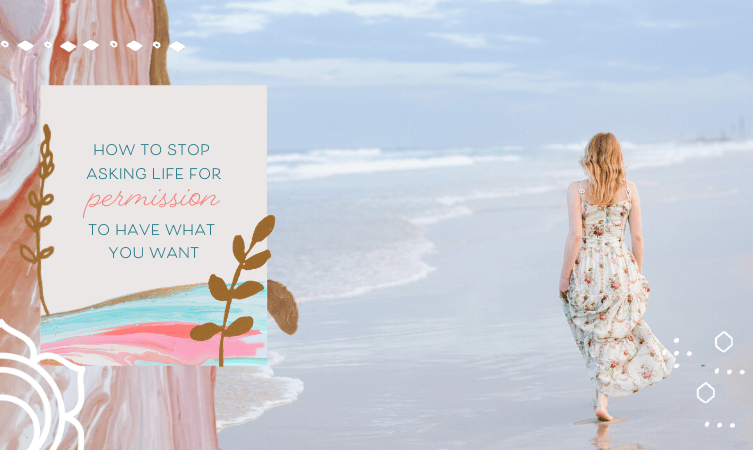 In the last few weeks, I’ve noticed one difference between people who are creating what they want in their lives and those who haven’t and aren’t.

Those who haven’t yet created what they want, are asking questions like:

Their steps in life are tentative and they are constantly worried that they are NOT meant to be having what they want.

They are the ones who are constantly looking out for signs from the Universe that they SHOULD be doing that thing they’re toying with.

That they CAN do it.

It’s actually easier to consult God, check in with destiny or see if your astrological chart might give its seal of approval because that way you don’t have to commit to what you want or take full responsibility for creating it.

The second group of people, on the other hand, decide what they want and don’t bother consulting God or the Universe with questions like ‘but is this my destiny, though?’ (or not for longer than two minutes, anyway.)

They decide what they want and then allow themselves (and the Universe) some time to figure out how it will happen.

Obviously, we’re talking about desires within reason. There are some things you’ll never do. For example, I’m not going to win X-Factor nor am I going to become an Olympic high-jumper (I am about 5ft tall and not that good at singing).  Nor do I particularly want to do those things.  But on the other hand, I know I can give workshops, write a book, make twice or three times (or ten times) as much money as I currently do.

And I don’t need your permission or anyone else’s. I just need to want it – a lot, enough.

Do you keep asking for permission to have what you want?  Life/ the Universe isn’t your mummy and you’re not 5 years old (unless you actually are 5 years old.)  You decide what you get to have and what you don’t, and your desires are showing you the way.

This mentality is hard to master when you’ve been through an educational system that teaches you that you may not do that thing you want, not without asking. And hard to master when you’ve been taught that if you don’t play according to someone else’s rules at work, you won’t get promoted and you won’t get what you want.  You have to play the game, right?  Not in the grand scheme of things.

In life, YOU set the course, even though you may be immersed in systems which tell you otherwise. You work out the ‘what’ to create. And then the Universe responds by helping you come up with the ‘how’. No-one else sets the course but you and if you expect otherwise, you’ll spend your life asking for permission that you’ll never get.

What about you? Is there something in your life that you will give YOURSELF permission to want – and create?

5 More Common Soul Lessons & How They Can Play Out For People
In this article I’m going to go into the theme of life lessons in depth, and talk about several more common life lessons that I have seen among my...
What’s the Meaning of Life?
Would it be cool if I could write you an article in which I told you what the meaning of your life is? I don't know what the meaning of your li...
Are You Learning Your Life Lesson?
If I can't have too many truffles, I'll do without truffles. ~ Colette One of the things that has been a challenge for me in my life is that I ...