Spooky Dreams, The Deceased & When There’s No Point to the Psychic Info We Pick Up 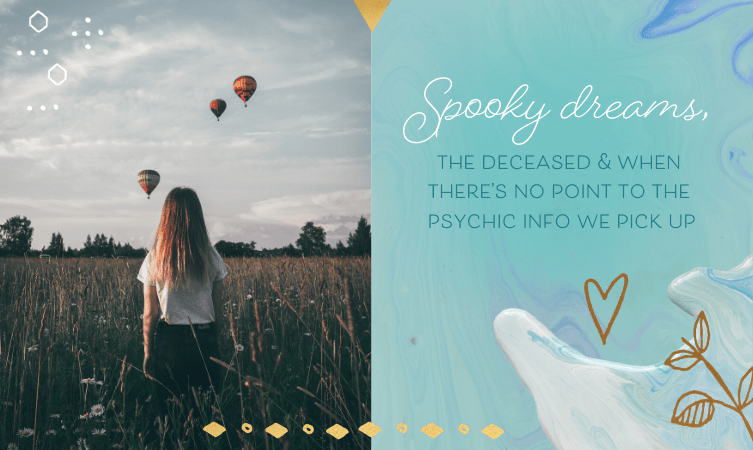 A couple of weeks ago I read for a woman – I’m going to call her “Sharlene” and she has given me permission to tell you this story.

At the end of our session, Sharlene told me that for a long time, she’d been having precognitive dreams (dreams which reveal the future to her.)  And not necessarily very nice ones that came true.  They were usually very nightmarish – like murders, bombs and abductions. Then the next morning she’d often wake up to the news of the specific murder/abduction/bombs she dreamt about.   Only the people closest to her knew about this gift she had, and she would ring her sister to tell her about the dreams she’d had as a kind of validation when, within 24-48 hours of the dream, it would come true.

Sharlene mentioned that frustratingly, all the dreams EXCEPT one seemed to be random and there was nothing she could do to help anyone with the information that she got.

She told me about the only dream she’d had which she thought was an exception.

I think it’s hard to put a dream into words as dreams are composed of feelings, sounds and sensations, with energetic subtexts that you can sense, even in the telling.  But here is what she told me:

In this dream, she met a wonderful man.  There was a specific look and feel about him. They had been walking and talking and were in a pub and there had been fireworks they had watched. In the dream, he told her that he had a very specific role within the Canadian Olympics, which I won’t reveal here for privacy reasons.  Then she heard his friend call to him, and he had to leave her.

She had been touched by the dream and felt that he had wonderful energy.

Intrigued by the dream, shortly afterwards she did some research to see if this man might exist.  She did a Google search for the professional role he had had in the Olympics and found him on the internet.  It seems that in real life, he existed.  He had the professional role in the event he said he had in the dream.  Then she found his name, saw his photo, recognized him and his energy.  Then she saw he was dead – he had died mysteriously before the Olympics, before he saw the fruits of his labour and had left behind a family.

Why would she have this dream if it didn’t mean something?  What was she supposed to do with the information?

She had never had any interest in the Olympics or heard of this man before.  He wasn’t exactly famous.  He was an ordinary person.

It reminded me of the TV show Medium (which I used to love) where Allison Dubois agonizes over the information she’s been given, that she often can’t do anything about because it’s not specific enough, or it’s too late.

I listened back to the recording of the session with Sharlene and listened to myself trying to explain why she’d had this dream. I think the real answer was – I don’t know.

The fact is, some of us, like Sharlene, are really tuned in – to the collective consciousness, to the realm of the dead, to what’s about to happen in the world.

I believe that the spirit world is a huge place teeming with souls, with stories, with love and joy, with agendas, with things they occasionally need us to do.  And if we tune into that (even accidentally), we can get overwhelmed or hit over the head with something irrelevant.  I used to have faces of what seemed like real people with identities pop into my mind with messages that meant nothing to me or to anyone I knew.  It just seemed like they were passing through.  Eventually, I tuned out from those souls, real or not.

It is possible to set the intention for the phenomenon to disappear – and it does.  You have to want it to, though.

When should we make it our business?

The same afternoon that I did a reading for Sharlene, I had a nap.  I usually ‘log off’ after a reading, but I can’t have done it properly this time. I lay down on the sofa, went to sleep and dreamt of the man she told me about.  He showed me his child and the things he wanted to do with his child when she was growing up, but would miss out on.  He asked me to publish his name and his story on my website in case someone found it.  I felt like he really wanted to reach his family in some way and he wasn’t going to move on unless I did this.  I felt a lot of pressure but I love helping souls out – dead ones and living ones – so I said I would.

I woke up and wrote back to Sharlene, who gave me the go-ahead to publish her story and even the details of this man.

Then in the next couple of days, I felt the presence of this soul – who it seems, was also a very persistent and determined soul when in a body – pester me.  At the same time, I decided it was too private a story to publish on the internet and wasn’t appropriate to do so.  I trusted my gut.

Sharlene and I both searched online for his wife but we both wondered what we were going to tell her if we did find her.  Sharlene had had information and details from a drawing of a woman that the man showed her in the dream, but nothing concrete that she knew constituted evidence that this spirit had visited her.

Then I realized it wasn’t the right thing to do.  I told him no, and called on the spiritual Third Order (the spiritual group that escorts deceased spirits to the appropriate astral plane after death) to help him cross over if that was in his highest good.  I didn’t hear from him after that.

I’m not sure if Sharlene learned something different from me from this experience, but two things I personally took from it, that I wanted to share with readers in case there is anyone out there who’s ever had a similar experience:

1. We don’t always get information for a reason

The onus isn’t always on us to take the information and assume that we’ve been given it for a reason.  Sometimes if we are sensitive (or were born that way), we’re accidentally tuned into the ‘bad things happening in the world’ channel or the ‘dead people’ channel or the ‘earthbound souls’ channel or the ‘what people we walk past in the street are feeling today’ channel.  Sometimes, no matter how intriguing an experience, it’s OK to shrug it off and forget it.  We don’t need to do other souls’ work, unless we want to.

2. Just because a spirit (even one with wonderful energy) wants us to do something, doesn’t mean we should

I always used to have such reverence for souls who were not in a body (perhaps because I used to be Christian.)  Now I know they are human souls, just like us – deceased spirits are human souls, with human foibles.  They shouldn’t invade our space or our minds unless we give them permission, living or dead.  The deceased guy wasn’t concerned about how that article would be received by anyone who knew him.  He just wanted to try it out and he seemed desperate and he was going to pester. God bless him. I thought he had wonderful energy too.

What about you?  Have you ever had an experience like the one above, or got information you didn’t understand?  Did you later understand it?

I would love to hear your experiences.

This was a really interesting story (and experience!) for me, and I am glad Sharlene gave me permission to tell it here.  Thank you, Sharlene.

PS – My Intuitive Awakening Course now has a monthly payment option. You will find the course here and you can read some course testimonials here.

One Woman’s Journey Into the Afterlife: In Her Own Words
A note from Anna: This is a guest post from Debra Reeves. Debra is a psychic with over 20 years experience communicating directly with Spirit...
What Happens After Death?
There are two parts to you - your spirit and your physicality. Your body holds your spirit. So what happens to your spirit after death? When yo...
Is There Life After Death?
This is part one of a three-part series that explores life after death. You can find parts 2 and 3 below. Part 2: What Happens After Death? ...