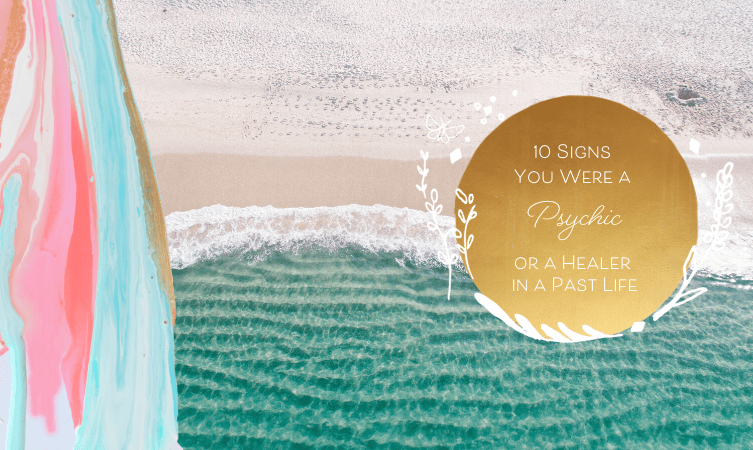 Most of us have at least a few dozen earthly lifetimes under our belts. And some of the people I’ve read for have had many lifetimes as a shaman, psychic or a healer in a variety of cultures and societies around the world.

When this is the case, it gives you skills from those incarnations, that you have developed through experience. And you can bring those skills forward with you into this lifetime, and if you wish, use them in the here and now to bring spiritual insight or healing to others.

The reason I’m writing an article which goes into signs you’ve been a psychic or a healer (i.e. those two together), is because those two roles often go hand in hand. If you’re interested in connecting with Spirit, you’re often interested in healing, and vice versa. Souls who have done one role, have usually done the other, too. Both roles involve access to inner wisdom, a faith in Spirit and a desire to serve others on their path.

So here are some of the signs you have been a psychic or a healer in a past life. If you resonate with 6 or more of them, it is very likely you’ve been a healer or a psychic before.

1. You’re open to, and interested in natural & holistic ways to heal (spiritually, emotionally and physically)

Those who have had many past lives in the role of shaman or healer, understand the wisdom inherent in finding the root cause of an ailment or problem and tackling that, rather than putting a sticking plaster on, so to speak. Such souls know that healing doesn’t necessarily come from a pill bottle and that there are ways to get to the root issue of whatever is ailing us, whether that be through spiritual healing, psychotherapy, herbalism, nutritional therapy, acupuncture, reflexology or crystal healing.

2. You’re a healer in this lifetime

This is an obvious one. You have a desire to help those around you to reach a place of wholeness. You have that strong drive to serve others, and healing just comes naturally to you. Perhaps you have trained in Reiki, or some other healing method, or you discovered that you naturally have healing energy in your hands, even with no training.

3. You have a past life connection to the Inquisition or the Holocaust, or both

This one is still a little mysterious in some ways, but something I learned through my past life regression sessions as a client (and training with past life regressionist Coletta Long) is that many of the people who have brought into the world (and benefited from) alternative healing techniques in the last 50 years are reincarnated Holocaust victims.

Coletta (who facilitated thousands of past life regression sessions over a 60 year period) found that many people who are involved in new age practices and healing in the here and now, died in the Holocaust, and in turn they also have a connection to the Inquisition (aka the persecution of those who were not Catholic.) I am talking about that period in history during the Middle Ages where the Church was persecuting ordinary people who had their own connection to Spirit, that didn’t involve Catholicism. There is a karmic link between those two periods in history (The Holocaust & the Inquisition) and those who were present during those periods also tend to be (or have subsequently become) healers and psychics.

4. You have unexplained fears around opening up your psychic gifts or using your healing gifts

Following on from the last point, some of those who had healing/psychic gifts and who were born into societies which were suspicious of such skills, have experienced persecution in the past. Think: the witch burning that went on in Europe for centuries. Those who have been persecuted in this way may possess healing and psychic skills, but also a strong reluctance or fear around using those gifts in this lifetime. This reluctance can be deeply rooted and goes beyond the usual fear of the social stigma associated with psychic work in our society.

5. You teach psychic development or healing, or you’re headed in that direction

Psychic work is not really a science, it’s an art, that can be challenging to teach. You can teach the steps of a technique or method but it’s harder to teach the spiritual discernment, non-judgment or compassion that is needed to administer such techniques effectively. These qualities must be modelled, not taught.

If a person is able to teach healing or intuitive development and model the qualities needed to engage in such practices effectively, this indicates a soul who has experience in this area.

Utilising one’s inner wisdom & healing skills definitely requires some degree of boldness and independent thinking, simply because Western society favours either organised religion, with a set of rules, or more recently, materialism, which tells us that psychic gifts do not exist.

However, those with healing and psychic skills from previous lifetimes are used to consulting their own inner compass for guidance, and that guidance may conflict with the collective beliefs of the society we currently live in. They are willing to follow guidance and do their own thing, even if it makes them seem a little eccentric or ‘different’.

7. You have an affinity for the spirit world

You feel or perceive energies; you’re sensitive or an empath. This way of experiencing the world that you have in this lifetime does tend to point to similar gifts having been developed through experience over lifetimes.

And if you’ve had your Akashic soul record read by me, or by someone I’ve trained, here are some additional signs you’ve been a healer/psychic in a past life:

8. You hold the ‘Counsellor & Advisor’ archetype

There are 35 archetypes which indicate both the roles you are fulfilling for other people in this lifetime, and the areas you have excelled in, in your past lives.

Having the ‘Counsellor & Advisor’ archetype means that a person has repeatedly held the role of advisor and counsellor in a past life. Such a person is able to create a safe space for others where free communication can take place and where the other can be him/herself, without fear of judgement. The Counsellor/Advisor also helps others to sort through their experiences, and grow in wisdom. This is one archetype which indicates a strong background as a spiritual advisor or psychic.

9. You have the fourth realm of training

(Otherwise known as being a Raphaelite.)

The Archangelic realm of training is about the energies that a person brings into the world. Being a Raphaelite means that a person has their training in the realm that corresponds to the heart chakra, and therefore it is a healing gift . As these realms of training do not change from one lifetime to the next, it is also a strong indication that the person has healing skills, not just in this lifetime but in other ones, too.

The soul groups of origin are dictated by the place or star system where we spent our formative incarnations, as souls. The soul group of origin has a strong bearing on our soul gifts and mission. (If you’re interested in this topic, I have a e-book coming out on it fairly soon.)

Arctureans are highly evolved souls with healing gifts, and Mintakans enjoy helping others on their spiritual path, and that often takes the form of healing or psychic work. Although there are 22 different soul groups, I would say at least half of the students who sign up for my Akashic Record Reading Program turn out to be Mintakan. It’s not a coincidence.

Extensive information about the archangelic realms of training, soul groups of origin and the archetypes can be found in my Akashic Record Reading Program.

How many of the signs do you relate to? If you relate to at least 6, it’s a strong indication you have been a psychic or a healer in a past life.

If you are drawn to healing, you may be interested to hear that I have a new, professional-level healing program available. It doesn’t start until early next year but places are already filling up.

What Have You Been Up To In Your Past Lives?
Recently in my Akashic Record Readings, I have started researching clients' past lives in more detail. I don't look into each and every past life ...
Past Lives and Karmic Connections
This is the third article in a series of posts about past lives. You can read the first article in the series here and the second here. Hav...
What Have You Learned in Your Past Lives?
Did you know that you’ve been working on yourself for many lifetimes? Your soul has been learning its lessons for centuries, if not millennia. ...