Run In The Opposite Direction If A Psychic Tells You This 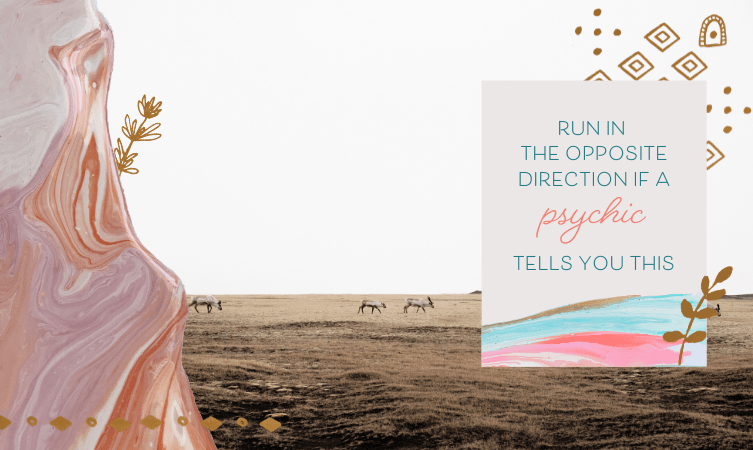 From time to time, I get emails from people who have been scammed by a psychic and I am talking about it here to raise awareness so that it (hopefully) doesn’t happen to anyone who reads this.

One of the unfortunate things about the psychic industry is that there are no regulations, no objective way to know if the psychic you’re choosing is a scammer. Only the sense you have about the person, and your impressions and feelings (and of course other peoples’ recommendations.)

There are some great psychics out there who have integrity.

The scam I’m talking about is when a psychic says the following:

“You’re cursed. This curse is at the root of all your problems. I will remove it for you in return for some money”

Sometimes the money is a huge amount (like $1500 or more) and sometimes it’s a smaller amount, like $50. Sometimes the proposed solution may involve candles, a lucky charm or taking a bath with something peculiar in it.

Are Curses Even Real?

Yes, curses can be real, but they’re very rare. And you can remove them yourself through intention if you are one of the few who actually has curse energy in your aura.

I know exactly what the scam above looks like because I was nearly scammed too. When I was younger, I saw an advert online from an astrologer who offered a free reading in return for my email address. I naively handed mine over, looking forward to my free reading.  Over the next week, I received an email telling me that a relative had cursed me and my family when I was little.  And that was the reason why so many bad things had happened to us.  (It is true, our family has definitely had their ups and downs.  And the more I thought about it, yes, bad luck too.)

I was told that I needed to buy a very expensive lucky charm to get rid of the curse. I ignored it because I didn’t believe that a lucky charm could have that power.  Then in the days that followed, I received harassing emails telling me of all the bad things that would happen to me if I didn’t take the woman’s advice and buy the lucky charm.

I didn’t buy it.  I blocked her email address.

A previous client also emailed me a while back because he was told the same thing as I was and wanted to know if I thought it could be true for him.  From what he told me, it sounded exactly like the same scam that I’d come across before.

Don’t hand over money to psychics because you’re scared of what will happen if you don’t.  Now, some might feel that is obvious, but I know that people can hand over money when they’re scared.

The second time you should take no notice (in my opinion) is when you are told that you are a ‘negative soul’ or a ‘black magician’.

I know of at least one psychic who tells people they are a negative soul/black magician.  In the last year, I’ve read for about one dozen people who have been told this. In all of the cases I dealt with, I found it to be untrue.  The effect on the people who are told they are negative souls is always, well, negative, and distressing.

You should definitely, always run in the opposite direction if the psychic offers to clear or get rid of your ‘negative soul’ status for you, in exchange for money.

I’ve written another, more detailed & up-to-date article on the type of scam I’ve talked about in this article – you can read it here: Curses, Witchcraft & Psychic Scams

I also wrote an article called ‘Tips for Choosing a Psychic Reader’, for more information on choosing a good psychic. You can find that here.

What Are The Ethics of Reading Other People?
My recent intuitive experiment has brought up the issue of ethics, as it relates to reading other people, to find out information about their life...
Why You Should Take Predictions with a Grain of Salt
Hi Anna, A few years back, a psychic predicted that I wouldn’t meet a suitable long-term partner until I’m in my mid-forties (I’m 29.) I’ve been ...
Four Tips for Choosing a Psychic Reader
I've been offering readings, and having readings as a client for over ten years now. Here are my 4 best tips for choosing a good intuitive or psyc...