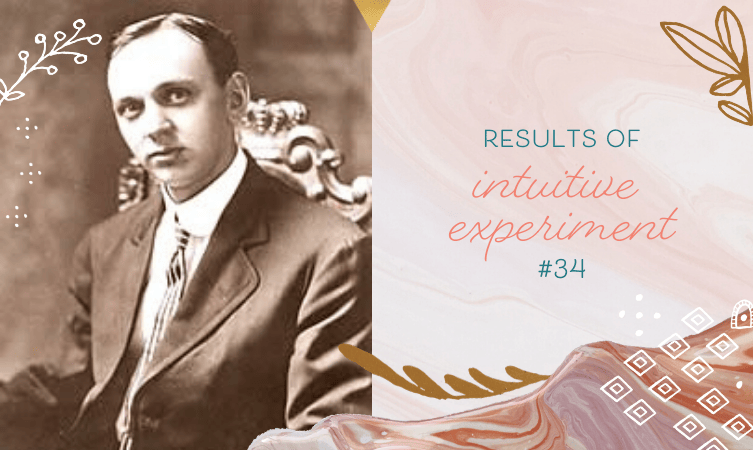 So who was the chap in the picture? I think some of you did recognise him – he was Edgar Cayce (1877-1945) one of the most well-known psychics of the twentieth century.

Cayce had the ability to enter an altered state of consciousness (sort of like a sleep state) and channel information for people about their physical ailments, past lives, health and future. During his readings, he also channelled plenty of information about more general metaphysical topics and questions, in addition to guidance about holistic health and wellness. He is thought to have performed 20,000 + readings over the course of his 40 year career, and many of them were documented and are still accessible via his Association for Research & Enlightenment, which has a website and a physical library at its headquarters in Virginia Beach, USA.

Cayce was born into a farming family in Kentucky, and he was one of six children, and the only boy. He grew up with a Christian background (and he remained a regular churchgoer and devout Christian throughout his life).

As a child, he displayed some unusual skills, such as mediumship (he was able to communicate with his deceased grandfather, Thomas Jefferson Cayce, who died when the boy was five years old.) And it was claimed he was able to absorb information from his school books while in a sleep state, without needing to actually read the material.

He left school at 16 to earn a living, and he had many jobs and ventures that he was involved with. First he worked on his grandmother’s farm. After his grandmother’s death, he found work in a bookstore, and then a dry goods store. He was also a travelling insurance agent for a while. He met & became engaged to Gertrude Evans in 1897, and they had a six year long engagement while Cayce worked on saving enough money for them to get married & set up a home. Three years into their engagement, his life took an unfortunate turn…

The Beginnings of his Psychic Career

At the age of 23, he lost his voice following a bout of laryngitis. The loss of his voice was expected to last a few days but instead it lasted almost a year. It was around this time that he quit his job as an insurance agent (as he could no longer speak audibly) and trained as a photographer, a career that required less communication.

At this point in his life, he met a travelling hypnotist and showman called Al Layne, who had the idea to try hypnotising Cayce, to see if his voice would come back while he was under hypnosis. It did, but the results did not last – he lost his voice again when he returned to a normal, waking state. A doctor in New York who heard about this experiment and who also believed in clairvoyance, recommended to Layne that he ask Cayce what the solution would be, to his ailment, while under hypnosis. They tried this, with success. Cayce, while under hypnosis, stated that the problem was caused by the subconscious mind cutting off the blood supply slightly to his vocal cords, and this was caused by psychological stress. While under hypnosis, he talked to his subconscious and asked for the blood supply to be restored, and those who witnessed this process, reportedly saw his face and neck grow visibly red and flushed. When he came to, he was cured of his ailment. This was his first reading – on himself.

Al Layne was so struck by this experience that he asked Cayce to research an ailment that was bothering him, with his stomach, and he was also helped by the information Cayce channelled. He started referring his own patients to Cayce, who started giving readings for free to people on their medical ailments. This was the start of his psychic career.

He married in 1903 and had three sons, one of whom died in infancy. In addition to his work as a psychic, he was also a Sunday School teacher, and he opened a photography studio in 1904, but the studio and its contents (including artwork he held on consignment) were destroyed by fire, twice, once in 1906 and again in 1907, leaving Cayce with large debts to pay off. In 1919, he also had a failed oil seeking venture in Texas, which he was pursuing to try to raise money to open a hospital.

Around 1910, Cayce gained some degree of fame, as his work was publicised in a New York Times article and he continued to be featured in national media in the years that followed. In 1923 Cayce hired a stenographer/secretary to document his readings.

Cayce believed he received his information from the Akashic Records, and also from his subject’s unconscious mind. Throughout the course of his career, he made prophecies, some of which came to pass and others which did not. His two sons, in a book they published about his psychic powers, claimed his readings had an 85% accuracy rate.

Both his wife and his sons were involved with his work, and the A.R.E. (the Edgar Cayce Association for Research & Enlightenment) that was formed in 1931. This Association is still in existence today and on its website, its mission is declared as being to “create opportunities for profound personal change in body, mind and spirit through the wisdom found in the Edgar Cayce material.”

Although he is dismissed by skeptics as a deluded fantasist, in the biographies I have read about him, he comes across as a rather humble and giving person. He never received renumeration for any of his readings, and he was also at times wracked with self-doubt over whether his information was coming from the highest spiritual source. It is clear that he was a very devout Christian, and was motivated by a desire to help those in need.

He died at the age of 67, of a stroke, following a period of over-work. A reading he did for himself around this time warned him to slow down before he killed himself as a result of doing too many readings. His wife, Gertrude Evans, died soon after.

Edgar Cayce’s work is still widely read, and he helped to publicise esoteric concepts such as the Akashic Records, past life reincarnation, auras and astral projection. As a result, he is considered one of the founding fathers of the New Age movement. Hundreds of books have been published about his work, and his Association of Research & Enlightenment is still in existence today.

The Edgar Cayce biography There Is a River

by Thomas Segrue (written in 1942 and apparently the only biography written by someone who knew Cayce well.)

Quite a few of you picked up that he had links to metaphysics, learning, research and libraries (this could be both the Akashic record, which is often seen as a “library”, and also the library that was created at the A.R.E. at Virginia Beach). Some picked up on a wife and 2 sons (or 3 if you count the child who passed away.) A couple of people mentioned he grew up on a farm and that his father was abusive. I did read an account of his father hitting him and exploiting his psychic talents as a child, but you’d have to Google it to find out more on that. Overall, I thought there were some pretty good hits on this one, so well done to those who had a go!

Good work as always from you all, and I hope to see you back here soon for the next experiment!