So who was the woman in the picture? 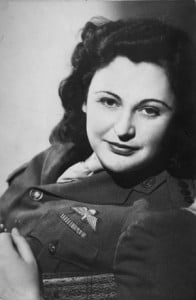 Her name was Nancy Wake and she was the most decorated female British SOE agent of World War Two. In particular, she was involved in fighting alongside the French Resistance and sabotaging the Nazis. She was nicknamed “the white mouse” by the Gestapo because she evaded capture so many times. By 1943, they had placed a 5 million franc bounty on her head.

She was born in Wellington, New Zealand in 1912, of Maori and English stock. Her family moved to Australia soon after she was born. She had 5 older siblings and a very strict, religious mother. The only harmonious family relationship she had was with her father, but he walked out on the family when she was very young, devastating the young Nancy.

At age 16, she inherited some money from an aunt and left Australia to work as a nurse, and later as a journalist. As a young woman, she lived in New York, London, Vienna and Paris. Her pre-war life during this time was glamorous, bohemian and fun.

While living in Vienna, she witnessed the brutal violence perpetrated by the Nazis towards Jewish men and women and was so shocked by this persecution that she vowed that if she was ever able to fight it in any way, she would. 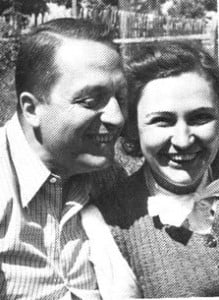 In 1939, she married wealthy French industrialist Henri Fiocca. They lived in Marseille and had a happy marriage and a glamorous, charmed life. Of him she said “he was the love of my life”.

Shortly after they married, Germany invaded France and in her spare time, she became involved in the French Resistance.

She started out smuggling supplies to the resistant groups and helping many escaped prisoners of war. She also escorted Jewish refugees out of France, taking them to the base of the Pyrenees where someone else would guide them to safety.

She became the best in the business at talking and flirting her way through enemy lines, passing on messages and doing courier jobs. Initially, nobody suspected her because she was wealthy, good looking and did not look the part of a spy.

She later left Marseille for Britain in 1943, as she became aware that her phone was being tapped and she was being observed by the Nazis. Her husband stayed and he was later captured, tortured and executed by the Gestapo for refusing to give away her whereabouts.

In Britain she joined the Special Operations Executive, which was a secret group formed by Churchill to help the Resistance fighters in France. She was trained in parachuting, weaponry, codes, radio communications, silent killing and survival skills. In April 1944, Wake was given the code name Madame Andrée and parachuted into Auvergne, just to the north of Clermont-Ferrand.

Her parachute got stuck on a tree on the way down, and she had to be rescued by Henri Tardavant, a resistant leader, who commented that he hoped all the trees in France would bear such beautiful fruit that year, to which she replied “Don’t give me that French shit!”

Her main role was to communicate with the British about the needs of the French resistant fighters, and arrange for weapons to be flown in. In addition to arranging supplies of guns and money, she fought alongside a rural guerrilla band in France, destroying railway lines, bridges and ambushing German convoys.

At one point, the contact between Wake and the British was severed when the Germans attacked and the radio operator disposed of the code books so as to evade capture. In order to re-establish contact and find a new transmitting radio, she cycled non-stop for 72 hours, covering a distance of 250 miles. She saw this as her most useful contribution to the war effort.

One of the French Resistant fighters Henri Tardivant said that “She is the most feminine woman I know until the fighting starts. Then she is like five men.”

She showed no mercy towards the Germans, shooting a captured female German spy without blinking, when none of her male colleagues had the heart to do it. During a raid, she also killed an SS guard with her bare hands to ensure that he did not raise the alarm.

After the war, she was awarded the George Medal, the United States Medal of Freedom, the Medaille de la Resistance and the Croix de Guerre. She also discovered that her husband had been executed by the Gestapo, and realized that her life as she knew it before the war was gone.

She then moved to London to work in intelligence, and remarried a former RAF fighter pilot in 1960.

Her feisty nature and warrior spirit were perhaps better suited to war time than to peace. She attempted to enter Australian politics in 1949, 1951 and 1966, standing as a liberal candidate for parliament, but was unsuccessful each time.

In 1985, she wrote her autobiography and retired to Port Macquairie.

By all accounts, she was rebellious, feisty, independent, tough, resourceful, hard-drinking, blunt, and fun-loving.

Among her Resistant fighter colleagues, she was renowned for being braver than all of the men.  ”Madame Andree is braver than Jacques,” one of the resistant fighters reportedly said to a British SOE agent, ”and Jacques is the bravest of us all.”

She apparently had a fearsome temper and her biographer Peter FitzSimons told Australian radio: “She was a woman who was always a hair-trigger away from being in a rage … and that rage within her was wonderful during the war, [but] it could be problematic when the war was over. She was a force of nature.”

“In my opinion, the only good German was a dead German, and the deader, the better. I killed a lot of Germans, and I am only sorry I didn’t kill more.”

“I hate wars and violence, but if they come, I don’t see why we women should just wave our men goodbye and then knit them balaclavas.”

How Did You Do?

Well done to everyone who took part. Some people did well with this experiment. For those who didn’t get many intuitive hits, remember that it takes practice and/or a good technique to become really adept at reading others in this way, so don’t be discouraged if you weren’t accurate – it’s not a reflection of how you could develop your ability in the future.

A tip I often dish out is to start with the person’s character where possible. I feel that if you start there, it’s much easier to pick out objective facts about the person’s life from then onwards.