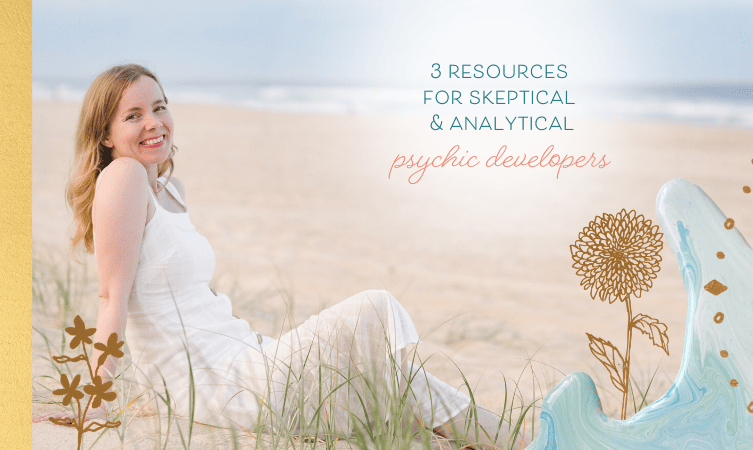 One of the strange contradictions within my personality is that along with being a spiritually minded person and intuitive, I am also very analytical and skeptical. My website name used to be “psychic but sane” – which I felt embodied this contradiction nicely, albeit in a rather confronting way!

When I was at the beginning of my psychic development training (which was mostly a training in how to read the Akashic Records) and working at a language school in Spain, having invested what to me at the time was a lot of money (on my meagre salary at least), tossing and turning at night. Essentially I was freaking out that the Akashic Records might not be not real and I was wasting my time!

Yet this was also around the time I had an amazing mediumship experience that I was not able to explain away:

(I have told this story before on the blog before so apologies if I am repeating myself!)

One night I got woken up by the spirit of a middle aged, Spanish man, let’s call him ‘Antonio’ who showed me the following visual, like a movie that played out in front of me: Antonio was in a camper van with a woman who I knew was his wife. Then he got out of the camper van and my boss Peter at the language school (an American guy) got into the camper van with Antonio’s wife.

Then Antonio said something along the lines of “I’m sad I wasn’t able to take my wife on holiday, but I am so happy your boss was able to.

Before the spirit left, he also said to me that he personally built the building I was living in.

When I went to work the next day, I was bursting with curiosity, excitement, doubt and fear around telling my boss. I did summon up the courage to tell him, and he knew straight away who the spirit was and what the message meant:

My boss had moved to Spain many years earlier, and met a Spanish woman, who had become his long time partner. A few years before they met, she had lost her husband at a young age to cancer (the guy I’m calling Antonio.)

She and her late husband Antonio had a dream of hiring a camper van and spending several months touring the US in it but unfortunately they never got the chance to do that as Antonio became ill and then died.

But she did manage to tour the US in a camper van with my boss at a later date.

To be clear, mediumship is not my speciality and it is rare for me to get such a clear and impactful message from a spirit – it’s only happened a handful of times in the last decade.

Around this time, as part of my Akashic Records training, I had just done an attunement which gave me access to the records, and this attunement had blown my third eye and crown chakras open (as it sometimes does for people!)

I believe that ‘Antonio’ took advantage of this openness to send a message (through me) to let my boss know that they had his blessing – something the couple had already suspected, as they believed Antonio was the one who had engineered their meeting from the other side.

Not only that, but Antonio had told me that he personally built the building I was living in. When I checked with my boss, he told me that his wife’s late husband did indeed build the apartment block – not just had it built, but was actually one of the builders, and he had owned it too.

However, I was still unsure and doubtful to some degree, even after that eye-opening experience.

This shows that if you are a skeptical/analytical person like me, your mind is probably never going to be fully on board at the beginning of your psychic development journey. And that’s its job – to keep us rational, grounded in reality, and safe.

So, as a skeptical explorer, you have to coexist with that doubt & disbelief, and allow the mind some time and space to get comfortable with the idea of psychic and spiritual phenomena, if it is not already.

Here are some ways to satisfy the mind and give it some food for thought, while you explore:

1. Explore the work of those who are immersed in both science and spirit

Spirituality and science often appear to be at odds with one another, at least in the eyes of materialists. But they do not have to be.

The physicist and metaphysician Thomas Campbell is someone whose work is based on both science and his own experiences as a spiritual explorer.

Thomas Campbell was a physicist working at the US Department of Defense when he was recruited by consciousness researcher Robert Monroe in the 1970s to be a guinea pig for his experiments in achieving out-of-body states. Campbell was both intrigued and skeptical at first, but as a result of his experiences started to believe that there was something more than just the physical body.

He has since retired from his career in science, and works as an international lecturer and writer, focusing on what he calls his Theory of Everything – which he calls a ‘complete theory of consciousness’, which appears to draw on both his long career in physics and his many years exploring consciousness and spirituality.

Because he has a foot in both worlds – the world of science and the world of metaphysics – I have long wanted to interview him on this blog but after chatting about it, we agreed it would be impractical, as his work is quite complex and not suited to the shorter text interviews that I do (as you will see if you watch the videos below.)

2. Do some readings and get feedback!

One of the things that Akashic Record reading students consistently tell me is that they are amazed at the accuracy of what they find in the Akashic Records and are able to pass on to their clients.

“I must say that the readings I gave have been a huge success!! I am just as shocked at the accuracy of the information as the clients are, truly amazed. I have now started typing my readings up on bordered and picture embossed paper, as all the feedback I have had from clients says that they print it out and keep reading their reading over and over and that it something they will keep forever.”

Another resource available on this site for skeptical psychic developers is the intuitive experiments – a chance for you to have a go at reading a random person, and then check your impressions when the results come out one week later. You will find a list of previous experiments here.

This probably provides more validation for the more experienced readers who have a bit of practice under their belt. (But it not just about validation – it is also another way to improve your skills and try your hand at reading someone else.)

Alexander was a skeptical, atheist neurosurgeon who contracted meningitis, ended up in a coma, and had a near death experience. While he was going through this experience, he had all kinds of amazing spiritual encounters that gave him insights about his life and relationships, and causing him to believe wholeheartedly in the idea of the afterlife.

Another good NDE book is Anita Moorjani’s Dying To Be Me.

Skeptical psychic explorers – how did you get beyond the resistance and doubts on your path?

And if you are looking for further tips and insights for connecting with your Spirit Guides and Higher self, you will want to check out my free e-course ‘How To Channel Your Spirit Guides (Even If You’ve Never Had a Spiritual Experience Before!)‘

Signs from the Other Side & Astral Projection - An Interview with Erin Pavlina
This month feels very significant for me personally because it is the 10th anniversary of becoming a professional intuitive, and as I reflect back...
How to Spot a Dream That’s From Spirit
I recently had the following question from a student of my Intuitive Awakening Course. I wanted to answer it publicly in case it is helpful for so...
Clairaudience & Ringing in Your Ears
Hi Anna, I have a question about ringing in my ears. I have experienced a high-pitched ringing on and off (sometimes for days on end) for many ye...