Premonitions of Death – Are They Real? 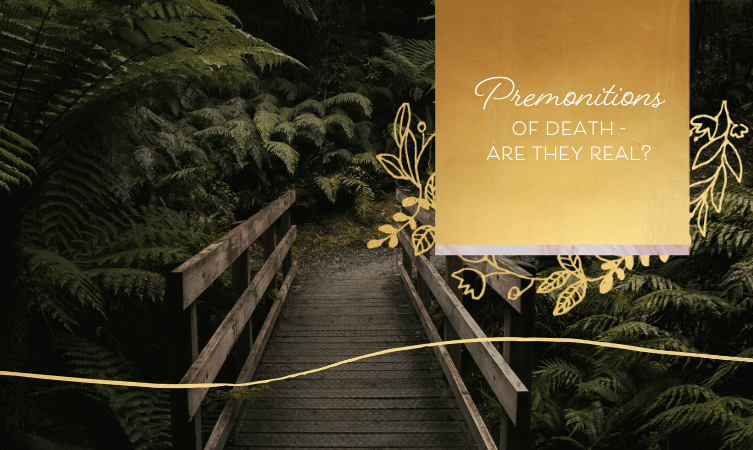 A question from a reader:

“Since we’ve been together, my husband has spoken of dying early (not often, but on a few notable occasions).

Recently, he has said that he is trying very hard (i.e. through taking care of himself physically) to stick around as long as possible for our son and family. I too have had a sort of knowing that he had a “contract” about dying early — do you think these premonitions are real?”

This is an interesting question.

I know several people (myself included) who have had premonitions about themselves or a loved one dying on a specific date or at a certain age. None of the people who had these premonitions actually did die when they thought they would.

So, in my experience, it’s best not to take this kind of premonition literally.

Here are some more likely scenarios when you have this kind of premonition:

Spirit sometimes talks to us in metaphors, and like the “death” card in Tarot, these kinds of premonition do not usually mean a literal death. They can mean an ending of some kind or a dying of a part of oneself. Personally, I find that I often have dreams featuring death symbolism when something in my life is coming to an end.

A Reminder that Life is Short

Sometimes when we have a sense that our time might soon be up, it can simply be our soul reminding us that our time here is limited. Of course, all of us will eventually depart this life and sometimes we lose sight of this larger perspective and stay stuck in situations and relationships which are making us unhappy, when we do in fact have other options. Think of this as your soul asking you to make your decisions bearing in mind that your time here is finite.

Not quite a death premonition

This kind of premonition can also mean a brush with death (or something that feels like that.)

I know someone who was absolutely convinced that she was going to pass away of a heart attack at age 37. She didn’t, but she did get cancer that year which she survived and has been in remission for over 25 years.

The only person I know of who had a correct premonition in this area was a great–great aunt of mine who was convinced she would get throat cancer and pass away from it, and she eventually did, many years ago. But she was also a heavy smoker and apparently had an unhealthy obsession with her own upcoming demise, which was possibly not so good for her health in general.

Could her premonition have been a warning of what would happen if she continued in her current habits? Who knows.

Past Life Bleed Through

I spent my twenties packing as much in as possible partly because I had the nagging sense I would be dead by age 26. It’s been five years since then, but this sense was perhaps explained by the fact that I did not make it past my late twenties in my two most recent past lives and have had a lot of short past incarnations.

Something I have noticed is that it’s very common to have these premonitions. It can constitute a ‘freak out’ about our mortality or the mortality of loved ones, which can be pretty hard to come to terms with.

Premonitions of death are also a natural part of grief, so if you have experienced a loss in recent times, this may also be your unconscious mind coming to terms with that.

I don’t think Spirit tells us exactly how much time we have left — that would be a bit mean, in my opinion, unless there is a very specific reason for you needing that information. The golden rule of guidance from Spirit is that it does not cause us anguish. Being here can, at times, be tough enough without that.

So my interpretation of this would be that this is about a very natural fear of losing your husband or about something coming to an end in his life or yours, or both.

Curses, Witchcraft & Psychic Scams
In this article I'm going to answer the following question: Can curses cast by malicious people affect us? But first, a story to tell you how I ...
Opening The Book of Your Past, Present & Future
Hi Anna, What is the difference between the method of accessing the Akashic Records taught in your Akashic Record Reading Program and other metho...
Where Does Your Soul Come From?
I have received lots of questions about 'soul groups of origination' - namely what are they and how they are relevant, so I thought I'd answer the...