The Dark Side of Spirituality? – My Past Experiences With Fundamentalist Spiritual Teachers 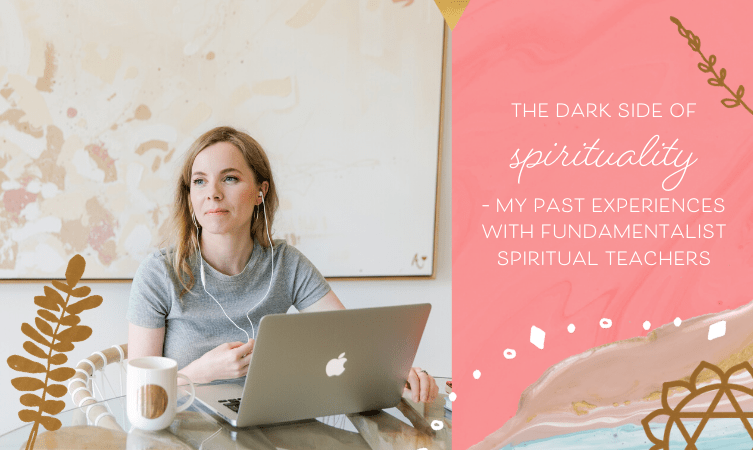 the interpretation of every word in a sacred text as literal or absolute truth.

I believe that fundamentalism is by its nature violent.

This is because a religious or spiritual fundamentalist says “This is (or I am) the Way and the Truth and the Life.”

We usually associate fundamentalism with Radical Islam or some forms of evangelical Christianity.

But it also exists in new-age circles.  I know because I’ve seen it.  I’m going to tell you about my experiences with it.

I realize that I have been writing about the dark side of new-age spirituality quite a bit lately. What is up with that? I don’t know. I had some dark experiences in the past. Not all of them are on this blog, and I guess I am trying to help others recognize when a spiritual teacher or healer is out of line, so that they can spot this sort of behaviour quicker than I did.

To date, I have met (or briefly worked with) three people who were spiritual teachers or channels that I would class as spiritual fundamentalists.  That means they declared that they had unveiled “the truth” and everyone else needed to listen and heed it.

I also have a couple of friends who have similar stories to mine and over the last three years I’ve worked with clients who have been in a similar situation and only afterwards realized they were effectively in a cult. Not one of my clients realized at the time that they had given away their own power, otherwise they would have woken up and gotten out.

Onto my cautionary tale…

When I lived in London, I went to see a healer who did some past life healing on me.  This man told me about how tragic my life was (OK, so it was a bit tragic at the time) and that I had until I was in my thirties to move beyond that and step into my power and ‘fulfill my potential’. If I didn’t, after a certain age, (I think it was 32) God and the angels would abandon me.  He also told me that only he could help me stop this from happening.

I view this time as one of the low points of my life (besides the time I left the Christian church).  At the time, I had a few hundred dollars to my name, and was pretty much alone in London (my family lived overseas) apart from an ex-boyfriend who let me sleep on his couch! So I had nowhere permanent to live.

A few years prior to this time, I had abandoned Christianity and was looking for my own spiritual truth.  I was so naive that I thought all spiritual people were good people.  They must be, I thought, as they all seemed like such lovely, caring folk. They weren’t telling me I was going to hell.  Plus, this man was not charging me anything.  He said he just wanted to help me.

He had a dowsing rod that he would use to access the Akashic record and your energy field, to see if you were telling the truth or if something was true in a reading.  You’d tell him something, and he’d test the veracity of it (even if it was just in everyday conversation).  Much of the time, he’d contradict you and say you were wrong, even if it was about something incredibly subjective, like how you felt.  It was bizarre.

If you said something he didn’t agree with, he’d tell you that you had negative entities who were messing with you and that’s why you couldn’t see the truth of the situation.  His intuition, (he said) was crystal clear and could see through any bullshit.

It took me a week or two to work out what was going on and fire him, as a spiritual teacher and healer.  What a horrible time it was.

It came to a head rather quickly, for one reason.

He told me we needed to sleep together in order for me to be healed.  He needed to re-parent me, re-love me – because my parents did such a lousy job.

This guy was 64 at the time.  And I was in my early twenties.

I didn’t need any more evidence that he was not only a fundamentalist – but also a sleazebag.  And I made a very swift exit.

From what I saw, this man was in conflict with everyone he came into contact with (who had any common sense about them) because they were all wrong, according to him.

He was only interested in making friends who wanted to ‘follow’ him; people who wanted to ‘learn from him’; people who would willingly release their own search for their truth, because here was someone who had already found it and would share it with them.

How can you know if your spiritual teacher or healer tends towards fundamentalism?

Here are some signs to watch out for:

If the above seems incredibly obvious and common-sense to you, and you’re wondering why I’m writing about it, then you’re obviously not the kind of person who gets sucked into this kind of thing.

The thing is, I consider myself an intelligent person, yet when I first came across behaviour like this, it took me about two weeks to work out what was going on.  It’s effectively brain-washing, and brain-washing is not hard to do, especially when it comes to vulnerable people.

Fundamentalism can also go unnoticed in new-age circles because spiritual people are often so accepting of others and so open. Some of them are more likely to cast love at you than tell you that your ideas are hateful.

I am going to fast forward a little and tell you about the third person I have come across who did this.

This was someone I met not so long ago.  It was a gentleman who has had a big hand in creating one of the modalities I trained in a while back – someone who channelled a lot of information that has helped a lot of people.  I knew of the existence of this person, yet I didn’t know him personally.  I thought he must be a great person because his information had helped so many people and he had given it away freely.

When I came into contact with him, I was so disappointed.  Right off the bat, he declared that my methods, my truth, my work were all wrong.

He had the truth, the right way, the right information and I should listen to him and become his student (if he considered me worthy of that privilege). All other teachers had such big egos that they had corrupted the truth. He even set me a task involving my intuitive abilities to see if I was worthy of being his student. If it didn’t align with his results, I was not ‘doing it right’.

I am open to people telling me that I’m wrong.

But I’m not open to people setting themselves up as spiritual authorities and telling me that all wisdom and answers come through them and no-one else.

I had already learned my lesson and so I made my exit quickly.

There is nothing ‘spiritual’ about this

Being spiritual but not religious means you go within to find your truth.  (Or you can take beliefs from any religion or spiritual tradition as it suits you.)

Finding your own truth means finding the worldview and beliefs that give you peace.

But this also means something else:

…that there can be no absolute search for truth – only your own truth, and my truth.

This is OK, isn’t it?  After all, as spiritual, emotional, intellectual and physical beings, it’s almost as if we are universes unto ourselves.  Your personal universe may not correspond with mine.

If we want to create more peace in the world, and within ourselves, I believe the best thing we can do is accept and respect other peoples’ spiritual and religious truths.

This is something I have been working on myself.  I had such a bad time with Christianity (and I hated it so much) that in the past I had thought, if anyone is Christian, then surely they must be setting themselves up for an unhappy life and must be very deluded.  I read articles like this one: 10 Reasons You Should Never Have a Religion and saw it as confirmation I was on the ‘right’ path.

Later on, I realized that not everyone is on the same path as me.  Christianity for me is a prison.  But maybe my prison is someone else’s freedom.

In the end, that thing that causes wars and prevents peace (in us and outside of us) is the belief there is only one truth and one way.

That is one of my favourite sayings.

What about you? – have you ever come across a spiritual teacher like this or found yourself in a similar situation to the ones I’ve written about here?

3 Intuition Lessons Learned from House Sitting
As I write this, I am on a house sit in the beautiful Bay of Plenty, New Zealand, looking after peoples' pets and homes in exchange for accommodat...
26 Things About Me
I know that sometimes people like to read a little bit about the person behind the website, and my 'about' page isn't very long, so I have compile...
Glad to Be Alive – Christchurch Earthquake
Yesterday there was an earthquake in my home city of Christchurch. I've been touched by the emails from readers asking if I'm OK and sending their...