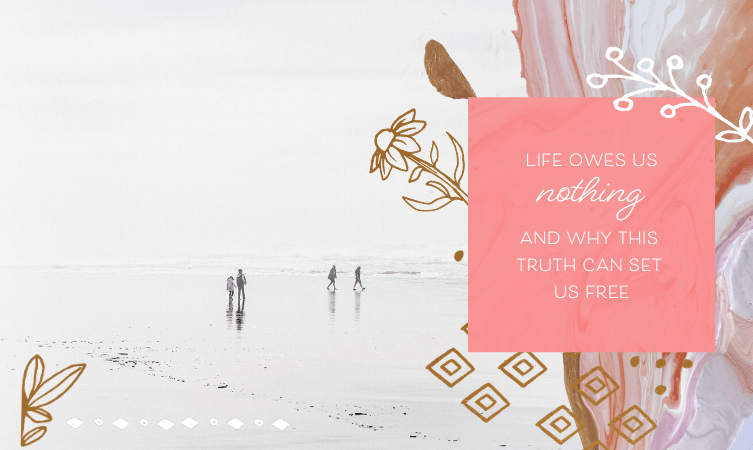 When I was little I used to yell at my parents when I was angry with them (probably because they always wanted me to be grateful to them for providing for me):

I also carried the “I didn’t ask to be born” thing into adult life.

Even though I knew, in a rational sense, that I did ask to be born on a spiritual level, I still felt entitled to an easy ride through life and I often felt like I had drawn the short straw in the game of life.

We had a lot of family problems growing up, and my teenage years were a bit crazy, so by the age of 20 I’d seen and experienced much more than the average 20-year-old (or at least the average 20-year-old who doesn’t live in a war zone.)  When I went to University I couldn’t relate to the lives of some of the people I met. I remember a friend at university being upset that a girl he liked didn’t feel the same way. He told me that this was the worst thing that had ever happened to him. I thought he was being melodramatic so I said surely it isn’t. He said genuinely this is the worst moment of my life.

I realized that he was possibly telling the truth and there were people out there for whom the worst thing that had happened was an unrequited crush in their 20’s.

I remember feeling angry in that moment that this person’s worst moment was an unrequited crush, when mine had been a series of much bigger and more traumatic things, at least in my view.

This strengthened the belief I had that everyone had it easier than me.

Then when I experienced later hardships: the Christchurch Earthquake, and my mother leaving me off the New Zealand residency application (so the rest of my family were allowed to live in New Zealand apart from me); and the ensuing visa difficulties; realizing that my family had provided for me but they had also been abusive and dysfunctional; and subsequently cutting contact with several members of the family in order to heal from this – it’s safe to say that I felt pissed off for a long time. I felt I had known more grief and loss than most people I knew in their late twenties and I was angry.

Occasionally I have a client who feels the same as I used to. Common events to be angry about are health issues, financial issues, divorces and bereavements. It’s especially awful when something happens that is not your fault, or not caused by you. It feels like you are being singled out for bad treatment.

But the answer Spirit gives to such questions is always the same: other peoples’ lives are a lot less easy than you think. And you asked to be born – there is something you can learn from everything that happened in this lifetime.  Cliched but true.

The part about other peoples’ lives I feel is important. It is easy to forget that other people have problems and lose perspective of what the average human life looks like, because our culture is commerce-oriented, narcissistic and based on appearances.

Commercials, businesses and movies tell us overtly and subtly that we deserve an amazing love life, a great body, health, financial success etc. (to name a few.)

People on social media share their successes much more than their failures and hardships which is natural but sometimes irritating when it’s all you hear about.

The realization I came to somewhere towards the end of 2012 was that it was time to stop sulking. Some people had had it worse than me and some people had had it much better. The good fortunes that people were sharing on Facebook were not representative of the rest of the human race. It’s not a competition.  Everything bad that happened to me helped me to learn something, grow and also helps me as a healer.

I am now remembering to be grateful for good things I experience, and to complain less about the bad things.

Something else that I fully understood in practice for the first time in 2012 was that we choose the joys and the hardships that we go through before we’re born. I knew this rationally before, but I didn’t fully apply it to my own life until recently.

I shifted from blaming my family and parents for what happened to me in this lifetime to understanding that we have a complicated past karma that I decided to resolve in my childhood, adolescence and twenties.

One of the reasons for this realization was that I started a course for removing past life traumas through hypnotherapy. My teacher Coletta Long told me:

I saw that misfortunes of this lifetime had their roots, not in my childhood, but in previous lifetimes. Then I began to have the dreams and piece together the clues of one of the most painful past lives I had experienced, which had been a perpetrator lifetime:

One night I dreamed that I was a young, single woman with a new baby I was incapable of looking after. So I rowed out into the middle of a lake in the night and threw the baby in without remorse. It felt inconsequential, like killing a fly.

(Incidentally, all my life I’ve been afraid of lakes, having had repetitive dreams since childhood about loved ones drowning in lakes or being dropped into lakes.)

Another dream I had showed me that I was a religious figure in Europe during the Spanish Inquisition, sentencing people to death for their religion.

Some believe that these dream metaphors are perhaps symbols of guilt from wrongdoings in this lifetime, rather than literal events. Not me – when I woke up from both dreams, I knew what they were and I knew they were being revealed to me for a reason.

I later got an astrology past life report which also talked about the perpetrator lifetimes that I had been through, and the re-balancing of karma as a result that was required. If we are a perpetrator in one lifetime, we become the opposite in the next. And we all experience one or more of this type of lifetime.

The re-balancing of the karma from such a lifetime may manifest as struggles in this lifetime, which teach us the opposite of what was practised in those perpetrator lifetimes; compassion; tolerance; being supported; learning how to ask for help; forgiveness; strength; courage and overcoming adversity. The re-balancing of the karma can heal us, on the soul level and allow our souls to reach a place of wholeness.

We don’t consciously know where the roots lie for the things that we experience in this lifetime. It’s usually buried deep in the subconscious. Until we know what happened in previous lifetimes, it’s safe to assume that one of the rules of the game of life is that this life owes us nothing.  This sets us free. We can stop expecting the universe to deliver a big break or that others will act responsibly or look after us. Our happiness and growth lies in our hands.