Lessons From My Past Life As An Oracle 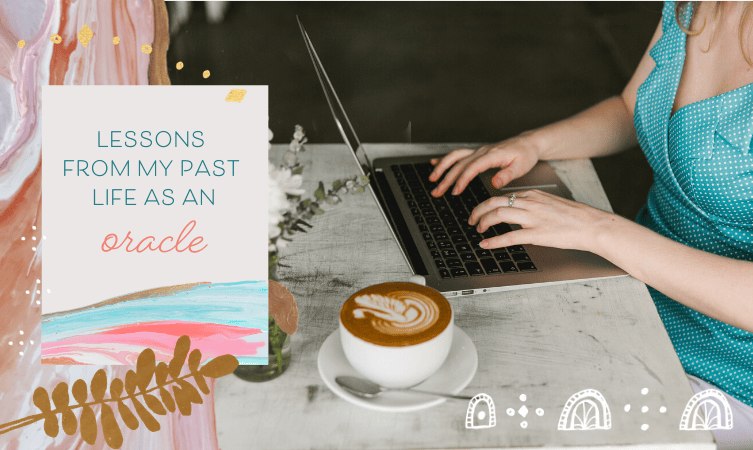 Recently I did a past life regression session as a client, and discovered a past life I had in Ancient Greece. I’m going to tell the story of that lifetime in this article, because the lessons of that incarnation still echo through this lifetime, for me, and possibly for some of my readers…

In the lifetime, I was a woman, working in a temple which was funded by a wealthy man. I was employed along with many others, to be some kind of oracle for the town we lived in, to keep us all safe and predict natural disasters and other dangers.

Instead of looking into the future, I spent most of my time teaching young students about the Greek Gods and Goddesses. There was a woman in charge who was hovering disapprovingly in the background because she knew that I was not doing what I was employed to do – instead, I was just doing what interested me.

One day, invaders came over the hill and approached our town. My employer was very angry that we failed to predict this and slit the throat of one of my colleagues. People were leaving the town in droves. I went back to my mother’s house where I tried to hang myself, which was a preferable death to being murdered by invaders or at the hands of my angry employer.

I spent a lot of time trying but ultimately failed in killing myself, and I left the town along with many others, but I was set upon by some of the townspeople who were angry that I had not predicted this calamity, all sorts of abuse and indignities occurred before I was left for dead. I died a few days later of dehydration in a ditch.

As part of the regression session, the therapist asked me was there anything I could have done differently during that lifetime, to prevent what happened?

I said that I could have had a frank conversation with my employer to let him know that it was not possible for every negative thing to be predicted. She asked me, what would have happened if you had done that? I responded that he would not have believed me and I would probably have left his employment as a result.

This past life was interesting to me because there were a few parallels to this lifetime. I am doing similar work and I really do not like doing predictions for people. Instead, I would prefer to be teaching people to tap into their own guidance. (My dislike for predictions probably has its roots in that past life.)

The Limitations of Your Intuition

The experiences from that lifetime also reminded me that if we try to use our intuition from a place of fear and control, it generally does not work out well. It is good to use our guidance to co-create with Spirit, and to create what’s good, rather than trying to keep out the bad.

This is my issue with doing predictions. If you ask for a prediction from a place of fear (which people often do), Spirit will usually instead address the energy underneath your question, such as, why you are scared or anxious, and how you can address that.

Your spiritual guidance will help you to stay on track with the paths that align with your soul, and it can often save you time, energy or heartache. But it won’t necessarily protect you from every disaster or loss. It doesn’t endow you with superhuman powers so that you can become immune to pain or misfortune. Instead, it can help you to trust in the Divine, live peacefully, and it can help you to navigate the disasters after they happen.

Like some of my past clients, one of the things I personally want to do when I’m feeling anxious about the future is to get a prediction. I like to have things planned out, and I like to be in control.

A few days before I got my New Zealand business visa, going against my own advice, I asked Spirit if I was going to get it. I was told not to ask that as it was not available to me to know at this stage. I pushed for more information anyway (I don’t advise doing this!!) and was told that “no” I was not going to get it. A few days later, I got it.

Part of the human condition is to co-exist with uncertainty. A connection with the Divine and with your guides/Higher self can help us to bear that, but it won’t allow you to bypass it.

My needing to be in control in the past has created a lot of unnecessary drama in my life, and I definitely learned that lesson in 2013. My resolution for 2014 is to hand things over to the Divine, and to have more faith that things will work out, rather than fretting and anticipating the bad.

I used to dismiss this way of living as ‘passive’ but as I let go and go with the flow more in the first half of January, I am enjoying my life more and am seeing more synchronicities (something I was not seeing as much before.)

I got a rash on my neck in the week after I did the past life regression. It was a perfect ring around the neck, like something has been chafing on my neck (like a rope?) Very strange- I’ve never had a skin irritation on my neck before! Check it out. 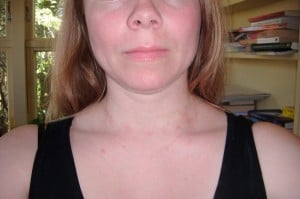 My question to readers is – have you had any accurate predictions? Do you find it difficult to surrender control and be in that place of uncertainty?

Past Lives and Karmic Connections
This is the third article in a series of posts about past lives. You can read the first article in the series here and the second here. Hav...
My Recent Past Life Regression Experience
I recently visited the US to get some past life regression sessions with Patricia Walsh of healthepast.com. I am training to be a past life regres...
How Are Your Past Life Relationships Affecting You Today?
By Jay Linden. Consider one of the best relationships from your life. One where you felt at ease in being yourself, energized and joyful and it...