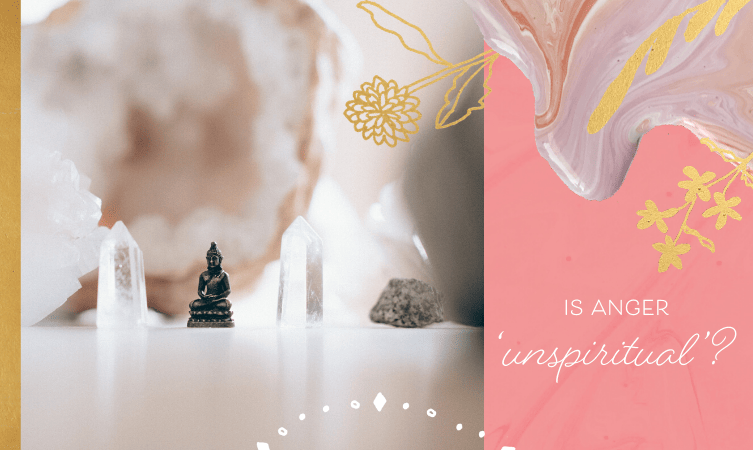 This week I sent out a newsletter with a couple of articles in it. I mentioned in the newsletter I felt angry about two things:

1. That there are psychics out there who scam their clients out of money by telling them they are cursed, putting the fear of God into them, and charging vast sums to remove the “curse”.

2. And secondly, I felt angry that every now and again I will receive an email from a member of the public (usually a spiritualist) who is upset that I charge money for my courses and lets me know about it in a way that is both insulting and shaming.

I wrote in my newsletter:

“I find anger can be very valuable if channelled appropriately. It shows us where we (or other people) are being dishonoured and disrespected, and where we need to say “enough” and make our voice heard.”

But I’ve since had a few interesting comments and emails which suggest that anger is somehow ‘unspiritual’; that it indicates we have something we need to heal in ourselves; or shows us where are reacting to something the “wrong” way.

As someone who has a lot of first-hand experience dealing with abusers, bullies and emotional vampires, (and as a healer who has helped other people to deal with these experiences, too) I have so much to say about this.

Anger is actually a gift to keep us safe and sane

When we feel angry (9 times out of 10) it is telling us that either something is amiss with our boundaries or that we need to ACT or SPEAK UP to protect ourselves or another person.

Anger protects us from unreasonable behaviours and abusive people.

I learned this the hard way

I am going to tell you a story from my past to illustrate my point (it was not my finest hour so please do not judge too harshly!)

I spent most of my twenties careening from one appalling relationship to another, usually with men who were narcissistic.

I had one boyfriend (let’s call him Markus) who was abusive, psychologically and verbally.

He would, amongst other lovely behaviours, gaslight me, put me down, humiliate me in public, sulk, refuse to speak to me, mock me, call me names and throw things at me. We weren’t together a very long time but this went on for weeks and I remember it being pretty bad.

Yes, all of this made me angry but at the time I believed that anger was not an appropriate response to have. I was conditioned to feel that way because I grew up in an abusive and dysfunctional family. But back then I was not able to respond in a self-protective way to that abuse because I was just a kid. And so I had not yet learned how to stand up for myself.

Markus exploited this and encouraged me to think that any anger I felt was unjustified – and not his problem. He also kept telling me that we were meant to be together because I was a healer and needed to help him heal his problems. He made me feel sorry for him.

So I just took it.

Until one day when I was walking down the street with Markus and he tripped me up on purpose (for his own amusement) on a packed pavement next to a busy road. I lost it. I got up off the floor and hit him hard in the face, twice.

I thought to myself, How did we end up here, with me on the floor and him being hit in the face on a busy London street? What the hell are we doing?

Picking myself up off the floor

The answer to that was that I was being treated appallingly and lashing out because I had swallowed my anger for weeks (and years, in fact.) I ended our relationship soon after that but it took more bad relationships and a few more years to learn my lesson and finally get in touch with my anger and start seeing it for the gift it was.

The fact is, all of our negative emotions are feedback from our souls. I would even go so far as to say they are a form of clairsentience. They often fuel action, not just on the personal level, but also on a societal level.

How would the world be different now, if people who marched on Washington during the Civil Rights movement in 1963 decided their anger wasn’t very spiritual and packed up & went home to go examine what they “needed to heal”?

Or if Rosa Parks swallowed her anger yet again and got out of her seat?

Or if the suffragettes decided their anger was unbecoming and abandoned their cause?

Or if lesbian & gay people decided that their feelings in response to being oppressed were their own problem?

I am not comparing my anger to the anger of those righteous ones who have helped to change history, but the same principle applies:

Anger helps us to take what’s ours and assert our rights in this big, bad world.

Empaths are the ones who need to heed this the most

I am currently writing a book for empaths based on my own experience as an empath and on my clients’ experiences. I’ve done a lot of readings for empaths and one of the insights Spirit has given me is that imbalanced empaths often feel too much of other peoples’ emotions because they’d rather not be in touch with their own.

But the problem with this is that bullies and narcissists are drawn to empaths like bears are to honey. And empaths sometimes do not realise who they have attracted until it is too late. Therefore empaths, more than anyone, need to be in contact with their negative emotions for their own self-protection.

Because as the playwright & poet Eve Ensler says:

Emotions that go unexpressed can erupt violently and demand redress.

So empaths: to avoid ending up on the floor, have a tune into yours. Beat that pillow. Listen to that angry music. Find out why you feel the way you do. Then act.

Rebalancing The Heart Chakra
In this article, I’m going to talk about how you can tell if your heart chakra is out of balance and I will also offer some practical resources, s...
The Spiritual Risks of Cannabis Use
Cannabis use is on the rise particularly in the US, where it has been legalised in some states. And of course it remains popular even where using ...
Why Should I Heal My Ancestral Line?
By Darla Antoine. Why Should I Heal My Ancestral Line? From ancestral foods, to ancestral medicines, ancestral movement and even ancestral yoga—...