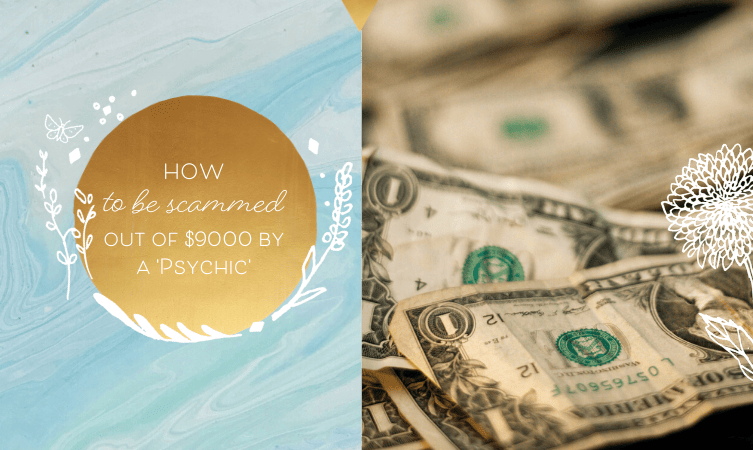 I wanted to share an extreme cautionary tale here on the blog about psychics who claim to help people to remove “curses” and reunite “twin flames”. (Below is an email I received several weeks ago from ‘Mary’, shared here with her permission, as she wants to help others who might find themselves in a similar situation.) Be very wary of people who work with spells and curses, and please don’t fall into the trap this woman did!

As you know, most people who go to psychics for help have relationship problems. I wasn’t any exception. I was dating a guy, we liked each other very much and things developed very quickly between us and after several weeks, he’d decided he didn’t want to do it anymore, which came to me as a total shock because he was so loving throughout. Anyway, long story short, I was desperately trying to seek help in any form I could find. I’m usually a rational person but in this instance, I was blind.

I got in touch with this psychic who claimed she helps reuniting lovers and twin flames and what not. I found her on Instagram. I should’ve seen this as the first ‘red flag’ but I was so stupidly desperate, I contacted her anyway. At first, she did an ‘affordable’ reading at $65 and was so spot on about so many things about my relationships and my life…I thought maybe she could be legit.

Very soon, she told me she picked up on ‘negative energies’ around me and that she needed to do a 21-day ritual for me to get rid of this ‘negative energy’. She went on to explain that kind of materials she needed and requested some information from me. She said she will need to charge $3850 for the materials and her time. As I was desperate at that time, I scrambled to find the money to pay her and I sent it to her.

Throughout the whole process, it was exhausting communicating with her. She was not very responsive and difficult to reach. Whenever I managed to get in touch with her, she always claimed that she was very tied up with clients and couldn’t talk. Also, whenever I was in touch with her, she was trying to induce fear in me, telling me all the horrible things that had happened to me in my life were because of this ‘negative entity’ and what other horrible things will happen if I don’t proceed with doing the things she suggested. And of course, she told me not to tell anyone anything.

A few days after the 21-day period, she came back to me and said, on the 22nd day, she and her ‘superior’ have discovered something else, which was a much stronger entity attached to me. And that now she had “opened a portal”, she had to continue working on it to “contain and destroy the entity forever”. And in order to facilitate this, she had to purchase a tabernacle (I should have laughed at this at that point) from the Vatican City to “contain the entity”, otherwise it wouldn’t work. She then proceeded to tell me this tabernacle costs a whopping $17,000!

That’s when I insisted (and it is also true) that I do not have this kind of money. She went on to tell me how life threatening this was going to be for me and my family because this so-called “negative entity” had been with me and my family for generations and it is a very “powerful force” that she must remove. And she can only do that with the tabernacle. I insisted I don’t have the money, she said I could pay her whatever I have now and settle the rest by monthly instalment.

I was still desperate to repair the relationship and wanted to ‘fix’ the ‘generational negative entity’. So again, I took out money from my credit account in the hopes that she could really help me. I didn’t have $17000, but including the initial $3850, by this point I had paid her around $9000! I’m just about ready to cry, just writing this out.

She went on to assure me there’s no other way to do it and after “containing the negative entity” with the tabernacle, there’s nothing else that needs to be paid, and everything will be sorted and well again. By that stage, needless to say I had lost a lot of money, and I started questioning her a lot and started having lots of doubts – about her methods and about her communications etc. I even googled a photo she sent me, claiming there’s where she sent my tabernacle for ‘blessing’. It turns out to be a photo of a church in New York. She got mad and very defensive.

All these things happened over the course of about 2.5 months. And she basically took my savings, and I almost maxed out my credit line. I was so angry and at the same time mortified that I fell for it! The worst part was she disappeared for almost two weeks starting around Independence Day weekend and she never sent me anything she promised me she would.

I still haven’t heard a word from her but it appears she is back online (we communicate via WhatsApp and you could see the ‘last seen’ on WhatsApp.)

At the time of writing this to you, I have blocked her number so that she can’t reach me anymore.

I’m seriously mortified and sorry for the long email. But it really makes me so angry that there are so-called healers/psychics out there who take advantage of peoples’ desperate and sad situations for their own profit.”

Getting emails like this truly makes my heart sink.

This is an evil scam and it goes as follows:

1. Scam victim is going through relationship anxiety; is heartbroken or has other significant problems that they’re currently struggling with

2. Scam victim finds a psychic who charges a reasonable amount for a reading and is very accurate

3. (This is where it starts to get murky…) psychic tells scam victim that she is cursed and needs ‘work’ done, and psychic will need to purchase “materials” costing thousands of dollars, in order to complete this work

4. If the scam victim hands over the money, it goes downhill from there. Most never see their money again or hear anything again from the scammer

5. Some scammers will try their luck even further at getting more money, by telling the scam victim they’ve found something even more frightening that needs clearing, and they need more money.

Mary got in touch later to say that luckily she had sent some of the money via PayPal and got some of it returned to her by filing a dispute, which is good news, but this whole experience caused a massive amount of stress for her and she has still lost some money.

1. If you are going through a lot of stress in your relationship or you’re dealing with heartbreak, see a therapist in the first instance. Recognise that you are vulnerable and if you’re going to see a psychic or a healer, work with someone you trust – preferably someone you have worked with before.

2. If you find yourself handing over massive sums of money to a psychic (I’m talking huge amounts like $9000) to have ‘work’ done, you’re being scammed. Getting energy work done is not like having a new kitchen put in or a new website created. It’s not a huge job that takes weeks, many man-hours and involves lots of materials. It shouldn’t usually cost more than a few hundred bucks. If it does, you’re most likely being scammed.

3. Be very wary when a person tells you that they can help you reunite with a lover or that you’re cursed. This is the ‘psychic’ equivalent of getting those emails from some strange Nigerian prince asking you to wire money so that you may eventually share in his windfall of $100,000,000,000.

We all know those are a scam. This is the same sort of thing, and the only reason this sort of thing works on otherwise intelligent people is not only desperation, but also FEAR — fear of negative energy and fear of negative outcomes. If someone tries to induce fear in you or cause you to feel that you are powerless during a psychic reading/healing, that person does not have your best interests at heart. We are not at the mercy of malevolent forces.

Please share this (and the links below) with anyone you know who gets psychic readings and may be vulnerable to this sort of thing.

What the Nodes of the Moon Can Reveal About Your Soul’s Purpose
On this blog I often talk about soul purpose. One great resource for exploring this is astrology, and specifically the nodes of the moon in astrol...
Why Do People Dream?
It is widely accepted that dreams are a way for the unconscious mind to communicate with you - that part of you that holds unconscious feelings, t...
Why I Love Space Clearing (Ghost Stories Included)
Since I became a professional intuitive over a decade ago, I've had plenty of emails from energetically sensitive folks (and parents of sensitive ...