What the Earthquakes in New Zealand Taught me about Fear 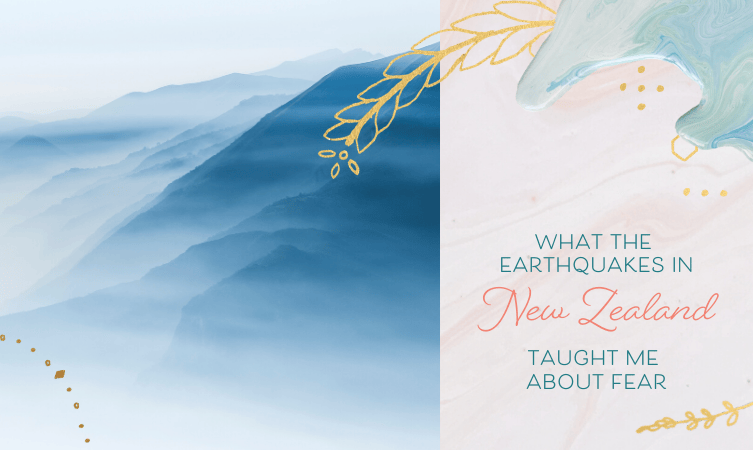 The earthquake was of course very traumatic. I think the most traumatic thing about an earthquake is that something so powerful can come along in an instant, possibly destroying your home or your livelihood and if you are unlucky, it can kill you too. If you live in an earthquake prone zone, it’s a threat you have to live with at all times.

Large and damaging earthquakes can also leave an imprint on your soul and your emotions. For me, this took the form of no longer trusting in God or the universe. I think that for a lot of people, when you are in your early twenties, you truly believe that you are invincible and that bad things happen to other people. I felt that I was somehow protected against accidents, illnesses or disasters.

So it was eye opening to have that illusion shattered. When the earthquake happened, I was standing at my kitchen sink. I think when these things happen, time slows down because of all the adrenaline that is being pumped into your bloodstream, I watched the ceiling and walls move, and I saw my TV fall off and pictures coming off walls and CDs sliding off shelves. I thought about the people that were obviously going to be dead outside, and I also cursed God because I thought I was going to die seeing as the building was obviously about to collapse and I felt it wasn’t my time to go.

Even though I survived, it didn’t matter – I was still angry with God and the Divine intelligence behind it all.

Looking back, I realise my apartment had been the best place for me at the time, because if I had been at work, I would have been in a lot of danger. The street I used to work on, at the language school, was completely destroyed with many injured and dead people.

I was lucky I had a client session that morning so I was at home. If I hadn’t had a client, I would have been out doing my grocery shopping. Plus the store I used to shop at had partially collapsed in the earthquake and the street above is one of the streets I walked down on my way to the store. The other street I used to walk down, Colombo Street, was just as devastated.

After the earthquake, I left the city feeling kind of broken. I decided I no longer wanted to live in the apartment where I thought I was going to die and so I moved away. Life post-earthquake was stressful. I made a few trips from Blenheim to Christchurch to retrieve my things. I remember crying in the arms of a gas station attendant and with the nice lady at the health food shop. En route to Blenheim, on the hill some kind soul had written KIA KAHA CHCH (stay strong, Christchurch, in Maori) using stones. That made me cry, too.

For me, the earthquake woke me up and made me realise that the life I was living needed to change. The earthquake said to me: “LOOK! Here is what’s wrong.”

My life started to unravel in a few different ways, I parted ways with my family of origin, realising that we were going in opposite directions, and I have changed and healed and evolved so much since then.

One of the interesting things I learned along the way is that when you go through a trauma in this lifetime, it can open portal ways in your subconscious mind to past life traumas that you’re still carrying around.

So many of my past lives have been about survival; and the struggle between life and death. My most recent past life, which I wrote about here, (it was a Holocaust lifetime) ended in me being shot in the head right when I didn’t expect it. Going through the earthquake opened a portal way for that past life to leak through and brought back the feeling that God had betrayed me and abandoned me by letting me die and surprising me with a sudden death.

Healing that past life through a past life regression helped to restore my faith and heal the disconnect.

Then recently, in Blenheim (where I live) we had another big earthquake. This time, I felt alarmed for a short time but not traumatised.

I spent the day wondering whether I really wanted to live in an earthquake prone zone. When I channeled my Higher self and Guides, they said to me:

“There is no safety on Earth, wherever you go in this world there will be dangers, real and imagined.”

The only safety is in spirit and in the divine intelligence, knowing that whatever happens, is your soul’s plan, and if you die it is your time to go. You are always safe, in spirit.

Why I Love Being a New Ager
This is a great poem by Jack Clarke which exemplifies exactly why I love 'New-Age' philosophy and thinking. What is New Age, Anyway? It's people...
Happy New Year!
Around this time last year, I was driving through a heavy snowstorm, making my way up to the Scottish Highlands. I had never driven in such heavy ...
I Moved to Yorkshire
It's been a bit dead around here recently so I just wanted to give an update to all the lovely people who sent well wishes and kind words in respo...