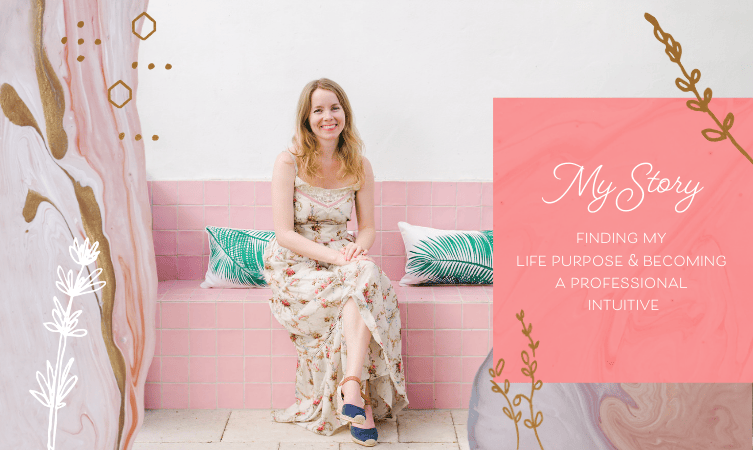 I have written this account of my psychic journey because I am often asked the question ‘Were you always psychic?’

It begins at age six really, because I cannot remember any specific psychic experiences before the age of six. 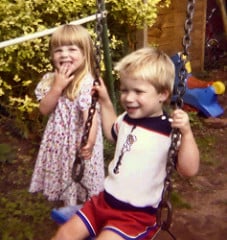 I know I was always very sensitive and I would say my strongest psychic gifts growing up were empathy and precognition (knowing when something was going to happen). I also had a strong bond (a telepathic or intuitive one) with my little brother Tony, who did not talk until he was nearly four. That was partly because I was able to speak for him and communicate to my parents what he wanted. This is Tony and I around that age.

My sensitivity was suppressed not long after because of a bad experience seeing a ghost in the house I grew up in.

I saw a woman standing in the corner of my bedroom at night. She was dressed in a style that was of the turn of the century and I still remember exactly what her silhouette looked like.

I am fairly certain she was an earthbound spirit (a soul who has died but not crossed over) although at the time I didn’t know who she was (I grew up in a house that was built around the end of the nineteenth century). I just knew she wasn’t a real person.

That experience put a fear of ghosts and ghouls into me – a fear that I didn’t get over until my early twenties. That night, I just put the covers over my head, absolutely petrified, hoping that she would leave. I remember my heart beating in my chest so hard. I told my mother about this encounter in the morning. My mother is a very pragmatic, scientifically-oriented person. I remember hearing my parents talking about my experience worriedly. From that moment on, I realized that my parents did not like my seeing things and it worried them. My parents had no experience or knowledge of the spirit world and I felt like there was something wrong with me for having seen what I had. I think I had concluded that I wasn’t “meant” to be seeing anything that they couldn’t see.

Later on, my psychic gift made appearances here and there, but it was not consistent. When I was around ten years old, I remember going on a week-long geography field trip to Wales. While there, it seemed I had a gift for prediction, as I was able to predict the meals that we were going to have before they served them. I was also able to predict the lottery numbers that week, although of course we were only about ten years old so sadly nobody went out to buy a lottery ticket!

A few years later, I became fascinated with the Tarot. I bought myself a pack of Tarot cards, much to my family’s disapproval as they associated the Tarot with the occult. I used to take my tarot cards to school and did readings for the students and teachers. I also used to play a game where I was able to predict which tarot card I was about to pull out of the pack, even if I reshuffled the pack, I would always know which one I was going to pull out. It freaked out my friends somewhat. I was told by my family that the Tarot was dangerous, and that it invited contact with negative spirits. In my experience, consulting the Tarot was interesting, comforting even and I sensed that something or someone benevolent was working with me to give me the relevant information.

Through this process of studying the Tarot, I became very familiar with the symbols of the Tarot and in retrospect that was the beginning of my intuitive training.

It was around the age of eleven that I began going to Church on my own. I had always been drawn to anything spiritual and Church was the closest I thought I could get to the supernatural. I loved the silence of the church on Sunday evenings and the poetry of the Bible. I loved talking to God and Jesus. My maternal Grandmother was a strong influence on me at this time as she was quite a religious person but she also had an affinity with Native American spirituality and she helped nurture a connection to the Divine. I especially enjoyed visiting her.

Another reason why I enjoyed spending time with my grandmother was because she was a graphologist (someone who analyzes handwriting to deduce personality traits). When I visited her house, I would spend hours reading her graphology books, decoding handwriting. By examining and retracing people’s handwriting, I was able to step inside of the experience of the person who wrote it and get a feel for who they were.

One of the first times I read for people I didn’t know was during a school fair at around the age of fourteen, when I analyzed the handwriting (and read the palms of ) the teachers and students. It was a fun exercise for me and they were all blown away by the accuracy of what they thought would just be a party trick or a cold reading. I never imagined I’d be doing that kind of work ten years later!

How I Energetically Cleared & Blessed My New Home
If you read my blog you will know that after several years of full time travelling and house sitting, I moved into my own place in Sheffield (York...
My life fell apart two months ago. The Anna you knew no longer exists…
Ok, I admit this is going to be a rant. But it’s a very necessary rant. Recently I found myself not wanting to write anymore for the first time...
My Transformation to Anna Sayce
One of the things about being in business that I have noticed is that if you have a business like mine, your business has to evolve with you. It i...