How I Deal with Criticism 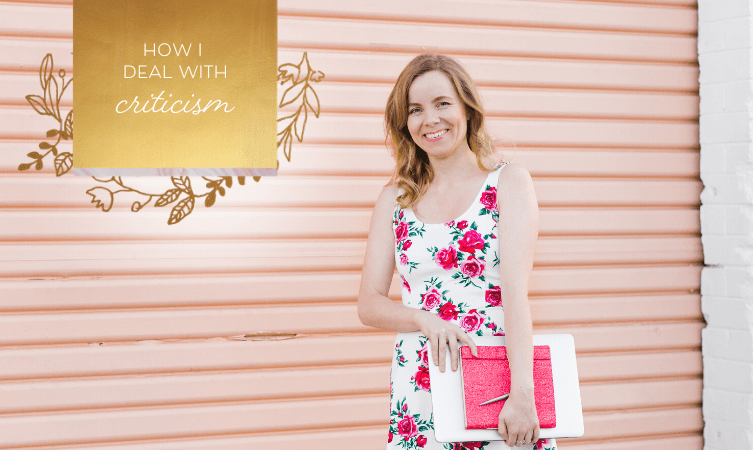 As I have a popular website which deals with new-age topics, I get a lot of feedback.  Most of it is nice feedback, but over the years I’ve received a bit of not-so-good feedback on my writings, opinions, and beliefs.

I wanted to write about it because for me it has been a really interesting journey putting myself ‘out there’ and navigating the feedback, especially as I am a very private person (believe it or not!) who used to be very sensitive to other peoples’ opinions.

Here’s what I’ve learned along the way.

I used to be so open to other peoples’ opinions and energy but now I consciously decide whose opinions to pay attention to based on the following: does the person know me? Do they care about me? Is it delivered with respect? Is it shaming or sarcastic? Does it come from a “you are flawed and I need to fix you?” place?

This was so hard for me to learn, mainly because I grew up in a very critical family. So when I started out writing, it was very upsetting for me when I received negative feedback because I had no mechanism in place, psychologically speaking, to filter out criticism that wasn’t constructive.

But the non-constructive or mean criticism isn’t even about you.

I love this quote from Anais Nin:

“We don’t see things as they are, we see them as we are.”

Critical people are so secretly horrified by what they see as their own imperfections that often they cannot own them or accept their humanness. Instead they just constantly see their own flaws as outside of them. For example, if a person unconsciously believes something negative about himself, such as being lazy or greedy, but cannot admit it, he will constantly see that in others. He will project his own insecurities onto the world around him.

Therefore, the more cutting or shaming the criticism is, the more it speaks to the person’s own ‘stuff’ and insecurities. Critical people are usually frustrated or hurting about something that has absolutely nothing to do with you.

For this reason, if you are making a mark in any way whatsoever (especially online) you will attract criticism because you will be exposed to more people who can be triggered by you or what you do.

Everyone gets criticized – people at the top of their field especially. The more attention you attract and the higher you climb, the more you get criticized.  Extremely talented artists get called talentless. Philanthropic people have their intentions doubted. Beautiful people have their appearances criticized. There will always be someone who is cynical or mean. That’s why those people have to be tuned out – you don’t want to join them in their negativity.

3. Be a good gatekeeper for your life and energy

I learned the hard way that if you have critical people or even one critical person in your life who thinks you’re not a good person or that you never do things right, it becomes impossible to feel good about yourself. Being surrounded by this type of energy is damaging long term. It can leave an imprint on your self-esteem and confidence that you could spend a long time overcoming. It can make you feel very self-conscious as you have this critical magnifying glass that shines on you and what you do.

It’s important to be a good gatekeeper for your life and keep out the toxic energy.

For me this means I don’t spend time around anyone who is critical or shaming, or who thinks I should be a better version of me. I also prefer to have an email gatekeeper (an assistant) so that I’m not completely open to all the energy and feedback that comes at me.

4. Remember who you are

When you receive a cutting criticism or negative feedback, it’s good to remember who you are and where you came from in that moment. That way you put it into perspective.

When I experienced  the Christchurch earthquake (I was on the ground floor of a multi-storey concrete building that was shaking violently) my first thought was “this building cannot fall on me because I still have things to do in this lifetime”. I didn’t think about how I wished I had been more acceptable to others or played it more safe. Instead I thought about the bigger picture, and none of it was about playing it small to please other people. That was very revealing to me – it shows what is important. I believe each of us has a purpose – soul gifts to share, lessons to learn, ways in which to inspire one another and it is good to hold onto that wider picture of who we are and why we do what we do.

Criticisms are just tiny blips along the way, irrelevant to your purpose and your life unless it is a constructive criticism that resonates with you.

5. If you have someone in your life who persistently puts you or your efforts down (even in a teasing way) consider the fact that you’re probably dealing with an emotionally abusive person

We may say something critical in the heat of an argument and then regret them later or apologize. But if someone consistently pokes holes in what you do and criticizes you, your life or your character, consider the fact that they are not your friend. They may be emotionally abusive.

Real friends don’t try to make us better people all the time, they take us for who we are. They accept that we are all on a journey and no-one is flawless.

How do you deal with criticism and negative feedback?

26 Things About Me
I know that sometimes people like to read a little bit about the person behind the website, and my 'about' page isn't very long, so I have compile...
The Dark Side of Spirituality? – My Past Experiences With Fundamentalist Spiritual Teachers
Fundamentalism: The interpretation of every word in a sacred text as literal or absolute truth. I believe that fundamentalism is by its nature v...
A Farewell Tiki Tour of New Zealand
I’m just concluding a trip to New Zealand, I have been here for 2.5 weeks, visiting my dad and collecting some stuff which was in a friend’s attic in ...