How Far Out Of The Psychic Closet Do You Want To Be? 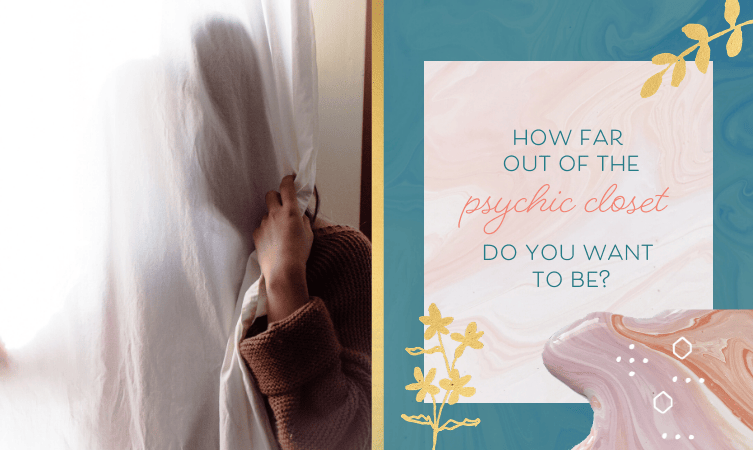 I know quite a few psychics who have already written about coming out of the psychic closet.

In spite of doing readings professionally for people, I’m still not keen on stepping out into the world with a t-shirt that has a big ‘P’ on it for Psychic.

The parts of me I choose to reveal (and to whom) – that’s my business.

I’m a linguist, a psychic, a languages teacher, and a creative/writer.  I’m also mad about cats and food. I’m a traveler who is beginning to settle down. I don’t think I’ll ever let go of the role of student.

Which one of these roles defines me?

Which of these do I want to put on my t-shirt that I wear when I’m out in the world?

It depends on who’s asking.

I’ve done that before.

A couple of years ago, I was in a room full of Catholics, most of them having attended the very stuffy University I went to (I used to share a flat with a couple of Catholic girls who went to the same University as me, and they were having a house party) and when people asked me what I do for a living, I answered ‘I’m a psychic.’  It was a big waste of my energy, emotions and time.

I got into an argument with a Catholic nuclear physicist who wanted me to see that I was on the wrong path and doing people harm.

I told him it was perfectly OK that he didn’t believe in what I do. This seemed to bamboozle him further and he repeated his thoughts several times, each time more vigorously, as if he thought I might be persuaded by his logic.

Although I maintained my composure on the outside when I was talking to him, the reality was that it did affect me and I came away from that exchange angry and drained that my beliefs were up for scrutiny. And the verdict was in: I was both stupid and crazy.

Since then, I protect myself from those experiences, and use both intuition and past experiences to guide me. I have found that people in the medical profession can be particularly closed off to the spiritual side of life (although I’ve met some who are open).  I’m also not interested in revealing what I do to those who I know have hardcore Christian beliefs.  Of course, being intuitive helps with this.  I can feel when people are tolerant and open to the spiritual side of life and I also can feel when they are not.

So, I select who I reveal myself to, in order to minimize drains on my energy.  I also do not get into arguments or discussions about my work.

Part of my purpose is to share what I do here on my blog and to connect with like-minded people.

It is not to convert others to my way of life or thinking.

I have also had the experience of being ‘out there’ 100% as a full-time psychic when I moved to Brisbane in November 2009. When people asked me what I did for a living in this new place, I told them straight. But I was not at all happy with the way people treated me.  People either saw me as an oracle who was a go-to person for spiritual wisdom, or they were freaked out and thought I might be able to read their mind.  Calling myself a full-time psychic changed the way people viewed me and I could not control that. So I decided to take another approach.

So, if you’re in the same position and thinking of coming out of the psychic closet, here are some things to think about:

Declaring yourself as a psychic to all and sundry (anyone you meet, including those who think you’re of the devil) is energetically a bit like getting naked and going out onto the common and waving a sign about it.  Kudos to you if you can do it. For me that attracts unwanted attention (in this context, I’m talking about the wider world. It’s obvious that I’m already online and waving my sign for those who are interested.)

I definitely recommend revealing yourself – as much as possible – to those who are close to you.  My close friends and family have known me as someone who is interested in psychic development for so long that it probably wasn’t surprising to them when I chose this path.  As for new friends, revealing that part of me to them (and gauging their reaction) might be part of my friend selection process.

I only choose friends who are tolerant people.  And I prefer talking with those who do some research before writing something off out of hand.  I also get on better with people who don’t feel they have ALL the knowledge and data that there is to be had in our universe.  If you believe adamantly that there is no life other than Earth in the Universe and that life here is an accident, then we might have a laugh together (and we might like each other), but on a deeper level, perhaps we wouldn’t see eye to eye nor would I ever feel understood fully by you, and vice versa. Telling people you’re a professional psychic does weed out the more intolerant (or just incompatible) people from your circle.  That is an energy-saver.

But on the other hand, for those who might never fully know you (such as acquaintances or strangers), I believe it can be draining to walk around with the psychic label. Doing that does not help me express my life purpose.  It just gets me into discussions and exchanges that take my energy away from actually doing my work.

At the end of the day, my path of psychic development has helped me to heal things from my past. I feel like I’ve come a long way from the girl I was in my teens, and since my Christian days.

Psychic developers, spiritual people and professional intuitives – who do you reveal yourself to?  And how do you do it? Are you trying to come out of the psychic/spiritual closet? How far do you want to come out of it?

How to Trust in the Universe While Navigating Big Life Changes - Interview with Intuitive Kelli Rees...
Several months ago, I was on the phone with an amazing woman, Kelli Reese, who is one of my former students. Kelli had done all of my online cours...
My 5 Favourite Daily Practices for Spiritual Connection & Manifestation
How do you connect spiritually to get guidance? In this article I want to share my own personal spiritual practices. Why Have A Spiritual Practic...
Quick Pendulum Dowsing Instructions
I give a complete set of dowsing instructions in my Intuitive Awakening Course. But if you would like the quick (and free!) version, below is a se...