Has Following Your Intuition Ever Led to an Outright Negative Outcome? 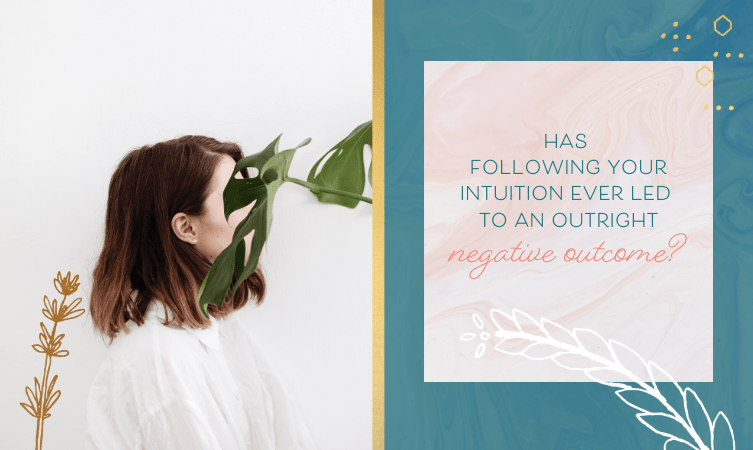 “Has Following your Intuition Ever Led to an Outright Negative Outcome?

By negative I mean you would have been better off not listening to your intuition – I understand that sometimes short term negative turns out to be very helpful in the long run.”

Last week I asked readers for questions they wanted me to write about on the blog.

The above was one of the questions sent into me by a reader.  I liked it the best out of the dozen or so that I got and thought it would be interesting to write about.

The only thing that came to mind when I read this question was when I left New Zealand in 2009 and moved to Brisbane, Australia.  I planned to stay there for a year but came back to New Zealand after three months because I had such a horrible time there and the climate didn’t suit me at all.

The reason why I was going to live in Australia for a year was because I thought that I didn’t want to settle in New Zealand long term.  I preferred Australia (New South Wales) the first time I visited last year. When I left for Australia in 2009 (the second time around), I consciously thought that I was leaving for a new life and I planned on finding a place to settle long-term.

When I got there, within a week or so, I realized it was going to be hard and I thought about going back, but I decided to stay.

Being in Brisbane was the most challenging time of my life so far, which is strange because relative to other life experiences I’ve had, it shouldn’t have been so trying.

In short, the things I hated about Queensland were as follows (in no particular order):

When I eventually decided to leave, I realized my passport had expired and I needed to apply for a new one (and a new visa for NZ).  That whole process took a couple of months and while I was waiting, I felt trapped and I was afraid they might not let me back into New Zealand and I’d have to go back to the UK (my country of origin.)

Above all, the experience was trying because I was terribly homesick for New Zealand and it was so intense I felt like I couldn’t cope anymore, emotionally.  Of course I could, and I did, but at the time I was shocked at how intense the homesickness felt.  Homesickness for me felt like an intense loneliness and distress that nothing and no one could satisfy.  Only going home would make me feel better, and I couldn’t go home because I hadn’t renewed my passport. And the homesickness was totally unexpected – I’d never experienced it before. I didn’t even know where home was, until it came around.

I was so angry with Spirit for a few months that my life had suddenly become so hard, even when I felt intuitively that it was the right choice to move to Brisbane, and I’d got that same message a couple of times from other psychics too.  I felt resentful about it and I couldn’t believe that such a choice that I’d taken lightly in the past (I’d moved around a lot and lived in many places on my own) could have such negative repercussions for my life this time around.

Although coming back to New Zealand healed the homesickness and restored a positive emotional state, I still felt that my intuition had led me astray and led to some seriously negative outcomes.

But once I got over it, I realized that although the experience felt intensely negative, there were certain things I’d learned that were intensely helpful.

I stopped relying on spirit to give me signs about what was best for me, and started thinking about taking responsibility for my own comfort.  The fact was, much of my suffering was my own fault. I hadn’t researched the climate and environment enough; I hadn’t gone with enough funds and I hadn’t bothered to renew my passport.  I realized how having more money could have made the experience a lot easier. And if I’d had a passport that was renewed, I could have left as soon as the going got tough.

I also realized that I had been so immersed in the spirit world that I’d lost some sense of practicality.  And above all, I realized where home was: New Zealand.

So there were plenty of positives after the fact, and my life is much better for it now.  I feel ten times more grounded and I don’t ignore the practical side of my life like I used to.  And my business has flourished since, because I get more done.  And I just moved into a new apartment and plan to get residency here in New Zealand. I’m not sure how all this will turn out or if life will stay peachy. But I do know that in 2009 I wasn’t a vibrational match for making any of these changes that made me happier, and I wasn’t motivated to make them, because I was too ungrounded. Going to Australia indirectly improved my life a lot, but it wasn’t fun in the process.

In hindsight, I truly believe my Higher self wanted me to go to Australia to learn a few lessons.

But that is my perspective.  Another person might feel like they’d been totally screwed over by their intuition.

What about you?  Have you had your faith shaken by misinformation? Have you had times where you feel your intuition has led you astray? What happened?

If you have a question that you want me to answer on the blog, based on my experiences, then send it to me! Here’s the article inviting you to do that. I look forward to receiving your question.

Should You Pass on Psychic Messages to People You Don’t Know?
I wanted to write about this because it's something people ask my advice about, from time to time. Personally, I do my best to be 'switched off...
Can Our Intuition Disappear?
A question from a reader: Hi Anna, I was very intuitive as a child, and up to the age of 23, I was likely to be able to predict things almost ...
Can Spirit Move Objects?
Hi Anna, I have experienced things moving in my apartment. Sometimes I hear things thump or move in another room and then I look and something ha...