Go Ahead and Screw It Up! 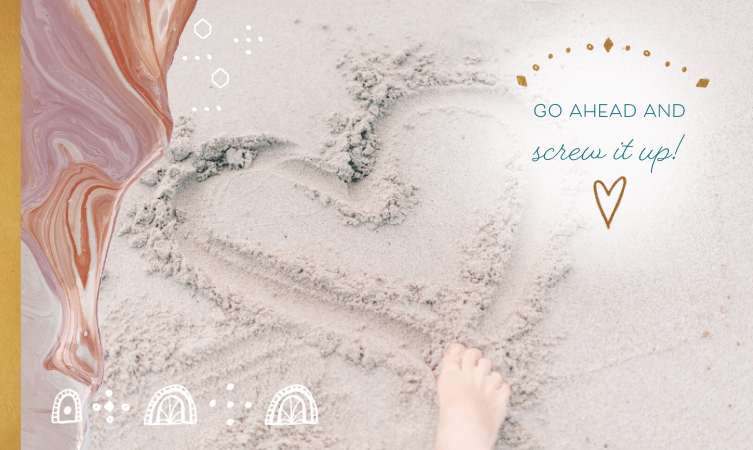 I believe that everyone can develop a connection with their Higher self, guardian angels, intuition and guides.

I have found that being in touch with your intuition and spiritual guidance is a bit like speaking another language – a language we used to know when we were babies and children, but might have since “forgotten” (some of us might have forgotten some of it and some have forgotten all of it.)

And the thing about learning and keeping up another language is that you need to practise.

AND you need the right mindset:

Namely, you must be open to screwing up.

How to Be Better at Developing Intuitively

I used to teach languages (I was a CELTA teacher before I became a professional intuitive). And I see some similarities between my language students back then and intuitive development students now.

The most successful language students were the ones who went into situations knowing they were probably going to make some mistakes. They got more practice and were able to correct themselves more often.

The least successful ones were the ones who were too scared to open their mouths in case they got it wrong. They tended not to get enough practice.

I also see this same scenario applies to intuitive development, where students realise they need to ‘get it wrong’ many times, before they can get it right – and some people need to make more mistakes than others do, before reaching a certain level. And this is discouraging.

There is often an emotional element to this, because underneath there can sometimes be a fear that you have no, or little intuitive ability.

But the truth is, all of us are intuitive, in some way or another.

Why Everyone Is Psychic

The reason why everyone can be psychic in some way is because everyone has a soul. We are spiritual beings in a human experience. There is a whole world of energy and Spirit out there that we can attune ourselves to.

Plus, we are wired to keep in contact with our Higher self (and Spirit Guides) while we’re in this physical experience that we call life.

My Own Personal Experiences with This

Was I one of those people who were born with fully developed psychic abilities that I retained into adulthood?

I grew up knowing that I was very sensitive and somewhat psychic, but I couldn’t always use my abilities on demand to channel guidance. Earlier in my life, I also went for periods without seeing much sign of them at all. Later on, I developed my abilities to a higher level through practice. (Back then I was not as intuitive as I am now!)

So how does this relate to your situation?

If you happen to be in any of those situations, I encourage you to give yourself space to fail. You must let go of your ego’s fears of looking like an idiot, and you have to make some mistakes in order to improve.

It’s OK to make mistakes in these situations: presumably, no-one is paying you for a reading yet, no-one is counting on you to get the intuitive experiments right, and no-one minds if you get it wrong.

As a recovering perfectionist, I am as guilty of this mindset as anyone.

An example that comes to mind:

When I lived in Australia several years ago, I joined a flamenco dance class. I love Flamenco and thought it would be fun to learn some steps. I paid for a 12-week course in advance but only went twice. Why? Because I wasn’t very good at it.

But no-one in that class was any good at flamenco. If we were, we wouldn’t have been there in a beginner’s class.

While you’re making your mistakes, you may be able to find a pattern to where you’re going wrong. You may identify an area where you need further teaching or information. You may be able to get feedback from others, which helps you to know that you are actually on track.

So go for it, and feel free to screw up!

And if you need further instruction on this path, you might like to check out my Intuitive Awakening Course.

Earthbound Spirits: Can They Make You Go Insane or Do Crazy Things?
One of the commenters here (Joey) asked an interesting question in the comments section of the last article, which was about earthbound spirits. I...
Who Are You Channelling?
Years ago, before I trained as a professional intuitive, I did my first Spirit Guide reading - it was for my employer at the time. He gave me a li...
What Happens in a Spirit Guide Reading
Often as part of an Akashic Record Reading, someone will ask me about their Spirit Guides. As part of this, we have a look into who the person’s S...