How to Stop Attracting Mr/Ms Wrong 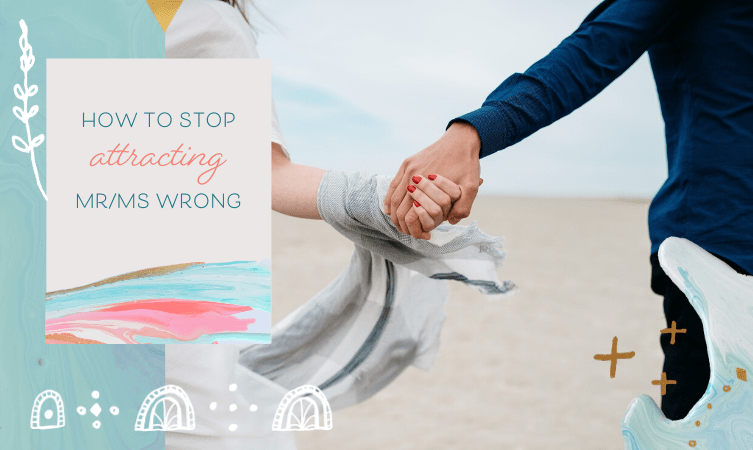 When clients have booked a reading with me in the past, it was often because they really wanted to find their ideal match but kept attracting Mr/Ms Wrong over and over again.

The work that we do together invariably focuses on the client’s default patterns of attraction. A client may tell me that they’re wanting a relationship that is X, Y and Z, but I tend to uncover some pretty unconscious patterns of attraction in these readings which show that the client is attracting the total opposite of what they say they want.

So this article focuses on unconscious patterns of attraction in relationships, how you can recognize them and how you can clear them to bring in the new. Really all it takes is a genuine desire to create something different, a good look at your past and the conviction that you’re worthy of your desires.

Looking to your past for the answers

It’s kind of a common scenario isn’t it? People who attract the same kind of partner again and again. I used to be a pro at attracting men who were terrified of long-term relationships. I have a friend who attracts a lot of men who are self-destructive or self-sabotaging in some significant aspect of their lives. It seems uncanny how the same kind of partner or potential partner shows up again and again. It’s not a coincidence – there is a reason for it.

Your default patterns of attraction can have their origins in previous relationships or they can be learned from your parents, family or from society. And because like attracts like, once you start putting energy behind that default pattern of attraction (like when people complain that they only ever seem to attract the same types), it takes root, becomes reinforced and this makes it harder to break out of.

Becoming conscious of your own old relationship story

A really simple way to become conscious of your patterns of attraction in relationships is to list all your past relationships – however short or long – and see what the common trait(s) are.

I’m talking about the common traits which caused the end of the relationship or some conflict in the relationship. It may be a trait in either you or in your previous partner. You may see more than one common trait. For example, you may see among all your partners that they lacked commitment to you. You could see the pattern that you made projects of your partners and tried to change them. It could be that you mostly dated people who were controlling.

Once you identify what you are attracting that you no longer want, you can clear it. You could tell yourself that you don’t need to take ownership of what you have attracted into your life in the past. However, the more responsibility you can take for your past relationships, the more you can learn from them.

The universe has an uncanny way of matching us up with the right person who can show us where there is an imbalance in our way of being. For example, the angry person often ends up with the scaredy cat who can’t stand up to them. We attract people who teach us a lesson we need to learn. Sometimes those lessons are the most painful. If you’re the type who attracts angry people, ask yourself why this is. It could be that you need to practise setting boundaries. It could be that you grew up around angry people and never learned how to deal with them, and the universe is sending you another chance. If you are always attracting partners who need your help and rely on you too much, maybe it’s a call for you to heal your desire to change and make projects of other people.

Recognizing the lessons from our past is a healing process in itself. I learned in my cord-cutting training that you cannot cut an energetic cord to a previous partner until you know what the toxic patterns are contained within the cord and where they came from in the first place. I believe it’s the same with our experiences. If you don’t learn the lessons from your past relationships and see what they were showing you, life will continue to hit you over the head with the same experiences until you do.

Bring in the new

If you’re letting go of what you don’t want – begin to focus on what you do want. Make a new list of desirable traits that you’re seeking in a partner (a list of non-negotiables). Some examples are: must have a sense of humour, must be financially solvent, kindness, willingness to commit, etc.

Next, look at your list of non-negotiables. Ask yourself whether you would date yourself. Do you have the traits on your list? For example, are you asking for a financially solvent partner when you’re broke? If so, you may be asking someone to rescue you.

A few months back I chatted with someone who was struggling with her finances, and she told me she was trying to meet a new partner and thought it would be nice to have a wealthy partner to help her in her finances. She met a broke guy. He also wanted to manifest a wealthy partner, and she showed up.

If there are some things in your list which you don’t embody, then commit to working on these as part of your process of attracting the ideal mate. Finding your ideal partner really does start from within. And it’s not about becoming perfect so that you can attract a perfect mate, it’s about becoming conscious of, and eradicating the parts of you which attract undesirable traits by default. Once you change from inside, the rest of the world shifts in response to the new you, including the relationships which come your way.

Did you know that cord cutting is an excellent way to change yourself from the inside out, and get a new relationship story?

And you can read more about my experiences with cord cutting here.

3 Mindsets to Maintain Healthy Boundaries in Relationships
When I talk about maintaining healthy energetic boundaries, I mean defining what is your responsibility and what is the other person's responsibil...
3 Blocks That Stop Us From Hearing Intuition in Relationships
Sometimes it can be difficult to listen to, and trust our intuition in the area of relationships. Even professional intuitives have a hard time...
Cord-Cutting As A Technique To Improve Relationships (And Your Emotional Health)
In this article, I want to address some of the most common questions people have about negative energetic cords. In case you don't know what a ...