Five Things I Definitely Believe in 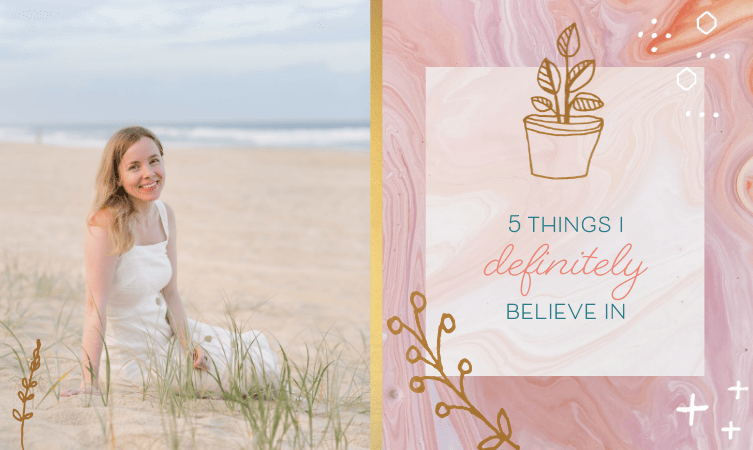 1. That there is a creative intelligence behind everything, which helps us through life

When I was about 14 I became very aware of this, having purchased a pack of Tarot cards.  I found that I had the strange ability to choose one Tarot card, and then mix it up thoroughly among all the others, not knowing where it was.  And then I’d consistently be able to pick it out among the 78 Tarot cards about a dozen times in a row, after mixing the cards up thoroughly each time.  I just knew which card was the original one.  It wasn’t a gift or a magic trick, but collaboration between me and the Tarot. I didn’t even know what it was that was helping me to choose the right card.  One of my old high school friends reminded me of this not so long ago and we remarked on how freaky it was.

Later on, I found that the pendulum could perform the same doubt-busting tricks.  One time I was able to do an impossible multiplication sum using the pendulum and a chart of numbers.  It seems the creative intelligence can do maths. I found I was able to pinpoint for clients the month and year of events in their lives, using a pendulum. Divination techniques are great for getting validation of this kind if you are open to it. The more convinced you become, the more you see daily, irrefutable evidence of the creative intelligence.

I’ve had a client get an Akashic Record reading with me, and then skeptical, get a reading with another practitioner, only to be told exactly the same things, on all the points we covered. I know because I’ve had an email asking me if I emailed the reading to a fellow practitioner which of course I didn’t! (…all readings are confidential.)

Whether people believe the creative intelligence exists in our human brains, in God, in Spirit Guides and angels, or even in fairies at the bottom of the garden, I don’t think that matters too much. I do know this: it exists and it’s helpful. And it’s available to everyone.

2. That there is an afterlife

I personally believe in an afterlife because of personal experience. I’ve channeled unusual messages from deceased spirits concerning matters that were known only to the deceased and the intended recipient of the message.  The only sensible conclusion I can reach, from the things I’ve experienced, is that there is an afterlife.  I understand that the only way some people can have this faith would be to go through something similar.

3. That we are never given more than we can handle

When I was doing my degree, I learned an interesting phrase in Spanish, that stuck with me over the years (unlike the other stuff I learned): ‘Dios aprieta pero no ahoga’. It means: ‘God squeezes but doesn’t choke.’ I believe we can find the strength to meet whatever challenges come up for us, and those that we can’t meet with some kind of strength, won’t happen.

4. That meaning is a luxury

Life can be frightening and painful at times.  Years after something bad has happened, we can still search for the meaning of the event; or the silver lining.  Sometimes one may not be forthcoming for years and years, and sometimes the meaning is not forthcoming while you’re incarnated.

Can you tell me one thing you definitely believe in?

When Your Loved Ones Don’t Agree with your Decisions
My last article about making decisions sparked an interesting question. What if you've made a decision, or are on the verge of making a decisio...
What’s the Meaning of Life?
Would it be cool if I could write you an article in which I told you what the meaning of your life is? I don't know what the meaning of your li...
Are You Learning Your Life Lesson?
If I can't have too many truffles, I'll do without truffles. ~ Colette One of the things that has been a challenge for me in my life is that I ...