Does Developing Psychic Abilities Send You To Hell?! (Anna’s Journey To Hell And Back!!) 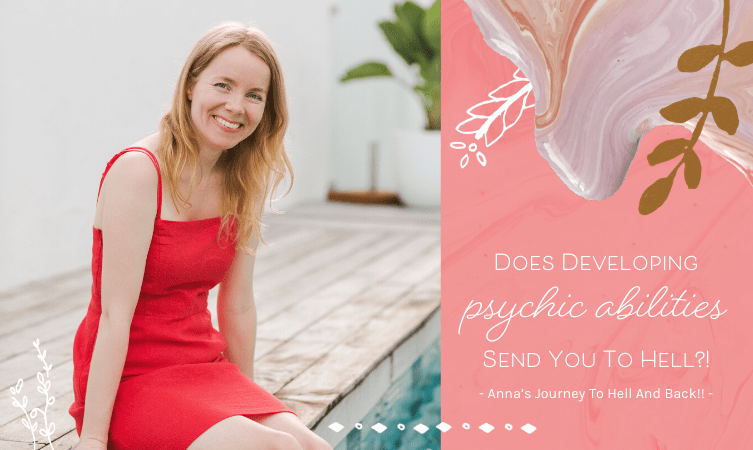 I started going to Church when I was 11 years old. I loved Church, I loved Jesus, I loved (some of) the Bible. Looking back, my interest in religion was as simple as it comes. I wasn’t interested in the ideas, or the chanting where we were pledging allegiance to God. I just loved basking in the energy of love and devotion to Spirit that I felt in a Church.

I thought some of the other people who went to Church were a bit weird, and I mostly spent my time in the back pew and in typical anti-social style I would slip out at the end of the service so I didn’t have to talk to anyone.

By 2003, I was at university in the UK and still identified as a Christian.

Catherine invited me to come along with her to her Bible study group. Being open to most things, I went along.

I found it was a group comprised only of young women. Many of them seemed emotionally and spiritually troubled – there were lots of eating disorders and mental illnesses among them. There was a lot of crying and sobbing during the study sessions. I remember one session where we were told that we must come to terms with the fact that most of our friends and some of our family would go to hell after death because they hadn’t accepted Jesus as their saviour. This produced a lot of crying and distress among them.

Most of the women who were very extreme were engaged to be married (or already married) to other guys in this Church.

At one point, I was invited along to their Church and I went. This was even stranger than the Bible study group and I had never experienced anything like it. There was singing, dancing and flag waving. There was a lot of mass hysteria and high emotion during services. People spoke in tongues and fell down with the Holy Spirit. When someone got a message from God, everyone listened.

It was difficult to hear the sound of my own reactions over what was going on in that place. I couldn’t take it all in. Was this normal?

I went a total of about three times. The third time I was sitting apart from my friends. I remember catching the eyes of a woman who was wearing a veil on her hair. I thought she was a Muslim. I remember seeing desperation in her eyes, as if she had lost someone, and I saw my own feelings reflected right back at me.

I couldn’t take anymore so I hightailed it out of there and then I remember walking along a canal path, crying bitter tears. I felt so, so lost. I didn’t know the angry, jealous God these people told me about – the God that was a tyrant, who gave and then took away, and who punished sins and exterminated forever those who didn’t believe.

When I got back to my student room, Catherine rang me. I blurted out that I couldn’t come to her Church anymore. I told her that I was taking a break from religion.

There was a silence on the other end of the phone.

That’s When I Saw an Even Darker Side…

Catherine told me that the reason I didn’t want to go to their Church was because I was under psychic attack from the devil. She’d seen it happen to people before.

I hung up and rang my grandmother. I was very distressed by this point. I didn’t know how to control the intense pain and negative emotions I was feeling. I told my grandmother what Catherine had said to me and told her about how I felt.

She told me I wasn’t under psychic attack from anything and asked me to come home for a holiday. I took some leave from University and went home for a while.

When I came back to University, I decided not to have anything to do with this church again.

They harassed me by letter. I met with them and they told me of God’s pain and anger towards me that I had let him down like this. I had several Christian friends attempt to bring me back onto the righteous path. I was warned that I was heading down the wrong road, and I could expect to see the negative results of this soon.

I knew that those results could not be as bad as what I had experienced in that church.

A few months passed and I felt happy again. I never saw any negative results from leaving the church and at no point did I feel like I had turned my back on God.

Instead I had turned my back on their angry God. A few years later, I was still getting harassing letters from Catherine, who feared for my soul. But in time I got over my anger towards her church and began to feel sorry that they were leading such fearful lives.

Later on, I read books such as Conversations with God and redefined my idea of what God was. I felt that there must be a source of all things – you could call it God, the Goddess, the mother and father, the universe, the creator. I found hidden under all of this religion stuff, MY simple truth: that all souls were a piece of this source energy, on a journey of remembering who they are. I rediscovered that the universe is kind; that God is kindness. I found that by honouring the voice of the God(dess) within me, I was kind to myself and to others. Kinder than I had ever been.

Later on, when I developed my psychic abilities, I found that developing psychically felt more in tune with my spirit than religion had been. At least with my intuition, I was able to assess for myself and hear what my own spirit had to say about things. I didn’t have to swallow what other people told me.

I know that religion can hold the essence of Divine Love because I’ve felt it. But I also think that religion can be powerfully unkind and this is evident in what I experienced in that church and in what I read in newspapers. I won’t participate in organized religion – organized anything, where people are told what to believe and swallow it, even when it hurts. I do not feel that men can be priests, but not women. Nor do I feel that God wants us to take an eye for an eye, or a tooth for a tooth. Does the powerful creative force of the universe want us to hide child abuse or discourage the use of contraceptives? I don’t think so.

But I would never ask you to agree with me.

Instead, I am all for developing and practising the capacity to see what sits right in your soul (if you have not already), and hold true to it. In spite of what any religion or belief system tells us.

To me, that’s what intuitive development is.  Everyone has their own unique path back to God/Source/Goddess and their own truth.

So, my personal answer to ‘does developing psychic abilities send you to hell’ is no. I do believe in hell – but only the kind you can experience by attending an evangelical church!! 😉

What do you think? Can you relate to my experiences?

I’m Waking Up, Now What? Spiritual Awakening – Part Two
This is the second article in a 2 part series - you can read part 1 here: 10 Signs You're Going Through A Spiritual Awakening By Shar Smith. ...
Signs from the Other Side & Astral Projection - An Interview with Erin Pavlina
This month feels very significant for me personally because it is the 10th anniversary of becoming a professional intuitive, and as I reflect back...
Are Archangels & Ascended Masters a Good Source of Spiritual Guidance?
Hi Anna, I am interested in your online course which teaches people how to communicate with their Spirit Guides. However, I have a question: ...