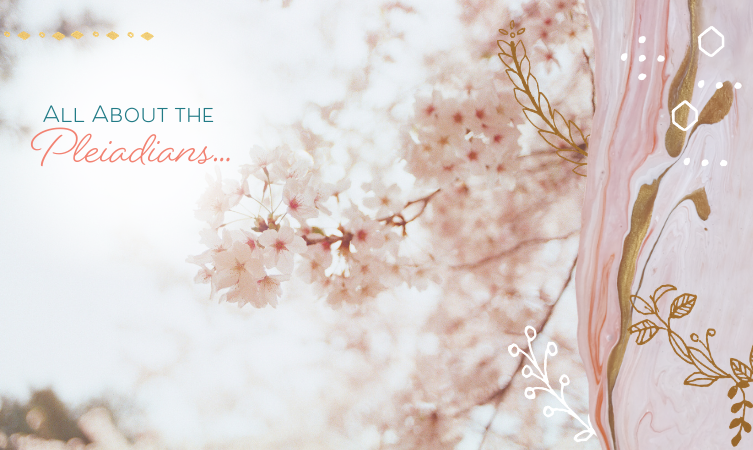 In this article, I’m going to share some information about a soul group of origin that is probably the most well-known one, the Pleiadians.

First of all, I just wanted to clarify that a soul group of origin is about the place where we spent our formative incarnations as souls. By formative, I mean, our first several incarnations as new souls.

About 25% of us are not native to Earth (i.e. not ‘Earth souls’) and we have spent our formative incarnations in other places of incarnation. So, that’s what it means to be a star seed, or a star traveller. When we spend our first several lifetimes as a soul in another place of incarnation besides Earth, we become imbued with the energies of that place, and then we express those in all subsequent incarnations. And so the soul group of origin is linked to the energies that we bring to this place, and our soul’s mission and purpose.

So here’s some general information about this soul group. If it resonates with you, you may have a connection on the soul level to this soul group. You can also scroll down to the bottom for a quiz at the end, so that you can get a sense for whether you might belong to this primarily, or if you might have a more minor affiliation with this soul group.

All About the Pleiadians…

This is an ancient soul group, so one that has been around and incarnating here on Planet Earth for a very long time (they have been here for approximately 100,000 years.)

The most defining characteristic of the Pleiadians is that they are here as catalysts and bringers of fast change.

This is a group that has definitely succeeded in helping us to speed up the rate of evolution on this planet. They are dynamic and inspirational individuals who inspire us to take the steps towards our goals. If they had a motto, it would be to “just do it!”

Pleiadians are excellent communicators and teachers – they love to talk. Incidentally, a lot of material has been channelled from the Pleiadians for this reason – they are vocal even when they are in spirit, and this is one of the reasons this is a well-known group. They make good PR people, even when not incarnated!

Pleiadians like to constantly express their thoughts and opinions and dish out advice. Although their advice is well-meaning, not everyone wants to hear unsolicited advice, even if it is good advice. Consequently, like many other highly-evolved star traveller groups, they are learning to respect that everyone is at the perfect place on their path, and that sometimes people need to come to their conclusions in their own time.

Pleiadians are always looking for the next exciting trend or thing. Because of this, they are often good in career roles involving product development and market research. They also make good entrepreneurs, because they are dynamic, visionary and quick–thinking.

Getting from A to B and the ‘Quick Fix’

Pleiadians are strong visionaries and leaders because they can see the ‘big picture’ and can communicate their visions to others very successfully.

They can see exactly how to get from A to B, but they are often less enthusiastic about taking all the steps and little actions needed to arrive at their destination. They can become rather frustrated, because in their minds they will leap forward, often leaving behind all the practical details that need to become a reality in order for them to achieve their goals. They simply want to reach their goals as fast as possible. They love speed and they dislike the principle of ‘step by step’. As a result, it can be highly satisfying for a Pleiadian to delegate all of the tasks to help bring about their vision.

One downside of this intense desire for instant results is that the Pleiadians have a weakness for the ‘quick fix’, and it is good for Pleiadians to be aware of this so that they avoid taking shortcuts (these may appear to get them towards their goals quickly, but can lead to a poor end result). Additionally inherent in their ‘just do it’ attitude is a tendency to act now and think later. Although this can result in favourable progress, it can also have some unexpected results at times.

The Pleiadians have a liking for revolutions (because they bring about fast change), and if you were to look behind the scenes of many of the revolutions that have occurred throughout history, you will find that a Pleiadian has been a driving force in the background. However, the Pleiadians don’t tend to look very far ahead to what happens afterwards; they are more focused on their role of catalysing, and they leave others to pick up the pieces.

Overall, the Pleiadians have a great deal to teach those of us here on earth who tend to get stuck in the pursuit of our goals. They are inspirational leaders who can show us how to move forwards quickly. They can teach us to overcome procrastination and go for our goals and dreams, even if we feel we lack the courage or self-belief.

The average number of earthly lifetimes for Pleiadians incarnated now is 80-90.

I sometimes encounter Pleiadians in my readings, although not as often as some of the other soul groups.

If you relate to almost all of the above, you’re likely to be Pleiadian.

If you relate to many but not all of the above points, you may have a more minor affiliation with this soul group (i.e. have spent time in the Pleiades, but perhaps not during the early stages of your life as a soul.)

If you’re interested in finding out about the other soul groups (there’s 22 of them altogether), you may want to check out my book — The 22 Star Seed Groups.

The information above is an except from my book, The 22 Star Seed Groups. I wrote this book so that people can read all about the various star seed groups that exist, and possibly get a sense for which one might apply to them, and what this might mean for their soul’s purpose.

What Do We Do In Between Incarnations?
In my conversations with students recently, I’ve found myself talking a lot about an interesting spiritual order called the ‘Third Order’. And whe...
Why I Love Space Clearing (Ghost Stories Included)
Since I became a professional intuitive over a decade ago, I've had plenty of emails from energetically sensitive folks (and parents of sensitive ...
My New Home Has a Poltergeist!
Hi Anna, I recently moved into a newly built house. No one has ever lived in this house before, and so I know that no-one has ever died here. ...