Earthbound Spirits: Can They Make You Go Insane or Do Crazy Things? 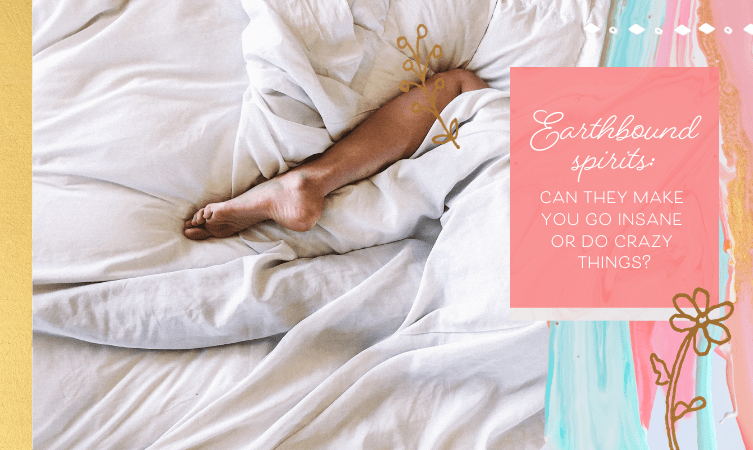 One of the commenters here (Joey) asked an interesting question in the comments section of the last article, which was about earthbound spirits. I thought that it was worth answering in more detail.

The question was something along the lines of: Can earthbound spirits hang around hospitals, possessing patients, making them go mad?  Joey also sent me a link to an article (something like ’10 most horrific ways to die in hospital’).  One of the loveliest ways to die in hospital is apparently, going mad and delirious spontaneously, seemingly for no reason. Joey wondered about the connection between people suddenly going mad in a hospital and the earthbound spirits that hang around in places like hospitals.

Why Would Someone Go Mad, Seemingly for No Reason?

Not simply because of an earthbound spirit, that’s for sure.

What Are Earthbound Spirits Capable of?

These spirits are like us, except they’re dead, and stuck.  They’re often vulnerable, unstable, scared and in pain for some reason.

In my opinion, people attribute a lot of things to the spirit world, that they really shouldn’t. I used to do this myself.

About four years ago, I was living in Spain, and working at a language school. I was intensely lonely there, and isolated (I was the only teacher who was working there, as many students were away for the summer and only one teacher was needed.)

One weekend, I decided to have a change of scene and went to visit Pau, which is in South-West France. I stayed overnight in a hotel. The moment I walked into my hotel room that day, I felt a dark presence. I didn’t like my room and should have requested another one, but didn’t. That night, I was very, very frightened and I didn’t know why. I also felt dark, almost unstable, like I was scared of what I might do, even though I was definitely not suicidal. I remember speaking to my mother on the phone and not wanting her to go because I was scared. That night, I was woken up every half hour, feeling like I’d been knocked on the head.  In the morning I was exhausted, still scared and glad to be leaving.

At the time, I thought I had been disturbed by an earthbound spirit and that it had made me feel bad, because in that room I felt terrible – very scared and almost out of control.

It’s easy to attribute a dark temporary feeling to a spirit like this, but in retrospect I can see that it was much more complicated than that.

There may have been a low vibrational spirit in that hotel room, but the truth was – I was already feeling pretty bad.  I had just let it out on my weekend away, by speaking to my mum.  I was feeling lonely, in an unfamiliar place, and felt lost.  I hadn’t seen a single friend or family member for months.  I already was in a bad mental space and any spirit that was present would have been amplifying that state somewhat.

If my mental state had taken a downward turn a couple of months later, it wouldn’t have been the earthbound spirit’s fault, it would have been something within me that caused that mental state.

I believe our mental health suffers when there is a physiological and/or psychological/emotional problem, and that it’s not necessarily about spirits or spiritual issues.

I have been reading a lot about nutrition in the last few months. In particular, I have read Donna Gates’ The Body Ecology Diet: Recovering Your Health and Rebuilding Your Immunity

– both excellent books on lifestyle and nutrition.

The author of the first book (Gates) is a nutritional consultant and the second was written by a dermatologist.  I was fascinated to read in both books about the connection between the health of the gut and the health of the brain.  Both books mention that studies have proved this connection. And both books touched on this issue of the food we eat affecting our brains – healthy foods and friendly bacteria (probiotics) improving brain health, and unhealthy foods helping brain function to deteriorate. It’s important not to forget the physical aspect.

Being isolated socially can also affect our mental health, as can being under intense pressure on a consistent basis or experiencing some kind of trauma that has not been healed.

My point is that a low vibrational earthbound spirit cannot turn a healthy person into an unhealthy one. Nor can any other spiritual issue come out of the blue and debilitate an otherwise healthy person. If you believe this, then you are giving the spirit realm way too much credit.

However, the spiritual always reflects the physical, so if you have poor mental health, and a lot of negative emotions, earthbound spirits may amplify that state for you.

If you focus on having emotional support in your life, being at peace, managing your stress levels, and taking care of your body (the usual stuff) then you are more likely to stay strong, spiritually, emotionally, mentally and physically.

Even if you have an earthbound spirit attached to your energy field, it won’t tip you over the edge because you won’t be teetering on the edge.

I hope this clears up any fears anyone has about what low-vibrational spirits might be capable of.

Spirit Guides & How to Work With Them
We are all blessed with Spirit Guides who surround us and support us. We usually have between four and seven guides in our inner circle. Our prima...
Are New Age Spirituality & Religion Compatible?
Taken in a church in Ile Des Pins, New Caledonia Hi Anna, “I’m interested in developing my intuition and I also feel a strong pull to be more of ...
One Way to Reduce Mental Clutter & Connect with Intuition More Easily
In this article I want to share a recent discovery I’ve made that might help some people to tap into their intuition with less effort. It sounds t...