Are You Using the Law of Attraction as a Big Fat Procrastination Tool? 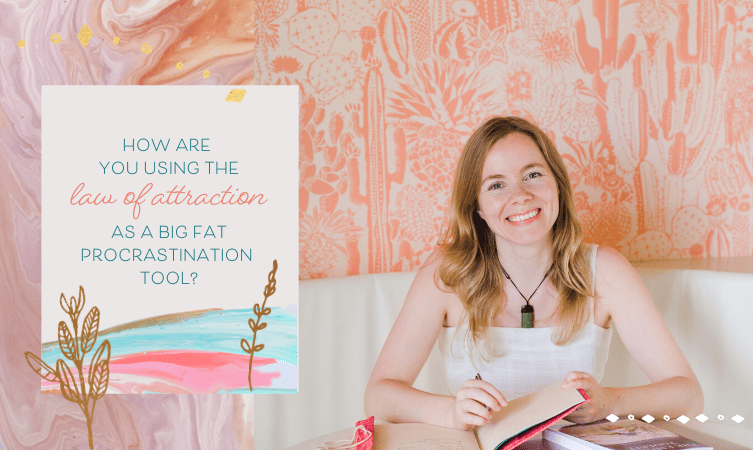 I wrote an article a few months ago saying that the Law of Attraction doesn’t always work.

I’m still convinced that the Law of Attraction (the art of ‘attracting’ and allowing) is a much more complex phenomenon than it’s been presented as, in The Secret, even by Abraham-Hicks. I believe it is a real law. BUT I think it has “yes buts” and caveats. It’s not black and white.

To illustrate this, I want to tell you about something I’ve noticed on my website.

It is to do with the timing of when people book sessions for a reading or for mentoring.

When I have plenty of energy, and I feel like doing sessions, I get lots of people ordering. When my energy is waning and it’s time to take a break from sessions for a week, they begin to dry up even before I’ve noticed I’m tired.

I get people booking sessions when I’m looking forward to doing them.

I don’t get them when I’d rather not do them.

It’s as if I have an invisible sign on my readings page that says ‘open for business’ or ‘closed for business’, even though I may write nothing on there.

I don’t do any strategic marketing these days to encourage people to book sessions. I have a constant flow of people coming to my website through search engines. I AM consistently on Twitter and Facebook. Those actions (which might be considered an act of marketing myself) do not occur and are not timed for when I would like to work with more people. In fact, I often do them when I’m not doing readings.

It’s also not my waiting list. I get as many people booking when I have a wait time of two weeks, as I do when my wait time is a few days.

So why do I get people ordering sessions only when I want them to?

In the beginning, about two years ago, I’d maybe work with three clients a week when I wanted six. So I began to ask my Guides/the Universe/my Higher self to help me to work with a specific number of clients. And I’d get told what to do (marketing, etc) in order to work with all those people and attract those clients to my website.

After a while, I kept requesting, but the flow of clients became steady and I didn’t need to do anything to encourage people to book sessions.

And it’s been like that ever since – I ask, and I get. I ask to work with six clients and I get six. I ask them to put the brakes on and no-one books a session for a few days. This has been happening for two years. It seems I can directly control how many people I work with, as long as it matches my energy levels, simply by requesting it.

If I didn’t believe in the Law of Attraction, I’d call it uncanny.

. That pretty much sums up the situation. I don’t have to do anything for it to happen. I just remain in the flow and it comes to me.

So I believe in the Law of Attraction in this context.

(And bear in mind that when I say the ‘Law of Attraction’ I’m referring to the act of ‘getting in the vortex’ and ‘attracting’ something; waiting for things to happen).

However…Here’s where I think the Law of Attraction teachings are an unhelpful distraction some of the time, and even cause procrastination:

I have seen this scenario a number of times.  Someone says to me:

“I can’t seem to get moving in my new business.  Nothing is happening for me.  I visualize every day, I feel great, I feel aligned with my being.  I know it’ll happen soon.  Success is coming – my big break is coming – I can feel it.  I just need to get out of the way.”

Four months later you speak to the person again.  They are working towards the same goals (but only in their head) and they’re in exactly the same place. They feel GREAT but nothing has happened.

The reason?  It’s so obvious, isn’t it? They didn’t DO anything.  They took zero action.  Instead, they thought about it – lots.  They analyzed all the reasons why conditions weren’t ideal for taking action yet.  They trawled the web for astrology/numerology/anything which backed up their conviction that it wasn’t the optimum time for them to get started. And then they went back to feeling really good about what was in their vortex and procrastinating on some more Law of Attraction material.

They liked their good emotional state so much, that they didn’t want to take some scary action and a step into unknown terrain, in order to make progress.  They were too scared and justified not taking action by telling themselves ‘it doesn’t feel right’ or ‘it wasn’t aligned’.

These people are successful in maintaining an ‘alignment’ and feeling good, but it seems that it’s at the cost of anything actually happening. A desire to feel good all the time causes procrastination.

Why some action is better than none

Anything big – successful, noteworthy, abundant – requires big actions.  If you refuse to take action chronically after having studied the Law of Attraction because it doesn’t feel good, you’re using the ‘Law of Attraction’ as a big, fat procrastination tool.

Most of the time I do something new – I feel bad about it and I get nervous. I am a pessimist. I am a perfectionist. I often have bleak expectations, it’s just the way I am made. I was afraid every time I clicked ‘publish’ on my first 30 blog posts. I was afraid when I brought out my course. I used to be afraid when I did readings for the first several months.  Doing things is scary.  Sometimes they feel like the wrong actions.

In business (and in many areas of life), I believe it is better to take some action (even if it’s from a place of feeling bad) rather than take no action at all.  If you’ve been at a standstill for a while, and you’re not happy about it, throw something against the wall, see if it sticks.  It’ll get you moving again, and you soon realize whether it’s a direction you like – or not.  That sparks some other action and soon enough you’re on your way again.

Following through with action to create change (even when you don’t necessarily feel great about it) works in business, and it works in other areas.

The Law of Attraction might send me a client a few hours after I request one.  It might make a compatible partner show up for you at exactly the right time.

But the Law of Attraction alone will not create you a successful business, or a successful career, or a consistent, healthy income from your career (unless you win the lottery or you accidentally stumble into a reality TV show audition, get on the show, and become famous and adored for doing nothing).

What I’m saying is that it’s good to distinguish between WHAT you can create through attraction alone, and what gets created through ACTION.  Perfect clients come to me at the right time through attraction (although it took a lot of work for me to build up a client base and become in demand as a psychic). The other aspects of my life usually require a lot of action.  Supporting myself financially requires a lot of action.

I don’t think I have ever heard anyone’s Spirit Guides or Higher self say “Just sit back, relax, let that success, money and fame you want come to you.  It’s all on its way and it’s going to be great!”

Dora has plenty of visions but hasn’t exercised her ‘taking action muscle’ in a while, so thinks it’s harder than it is to create these visions.

Jim can’t decide and won’t do anything until he decides EXACTLY what he wants, so he is stuck.

Neill is chronically terrified and needs to know that nothing is as scary as he expects it to be.

Joe won’t take any action because he thinks it’s got to be all perfect before he does.

Spirit doesn’t tend to suggest you go and watch The Secret to make it all better and convince yourself it’s all on its way anyway. Usually a solution or a practical suggestion is proposed, such as:

‘Just try that course of action and see what happens’

‘Try it and then you’ll get clearer on what you want’.

What’s the real reason why it isn’t happening for you?

Did you agree with what I wrote here?  Disagree?  Give me your thoughts by leaving a reply below.

How to Expand Your Business & Serve More Clients As a Professional Intuitive
When I first trained as a professional intuitive, I decided fairly quickly that it was something I wanted to work at full time. And so I sought ou...
Get Advice from Your Future Self — Free Guided Meditation
Following on from my most recent article about the future (Is it Possible to Read the Future? The Latest Research Says Yes) I’ve been thinking a l...
The Antidote to 'Comparisonitis'
Have you ever admired someone else’s skills, talent or work, and felt that maybe you’re not that gifted in comparison? 'Comparisonitis' is defi...