My Spiritual Awakenings in Spain

At the end of my second year of University, I went away to Spain to learn Spanish for one year, which turned out to be a real adventure. 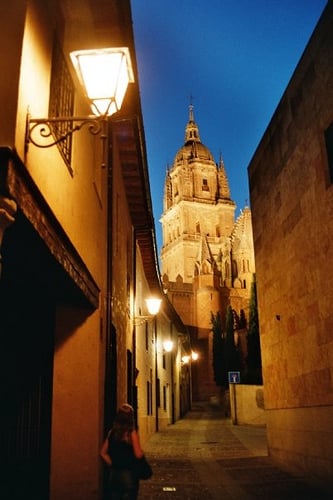 I got there in the month of September in time for University beginning in October. I arrived, quite scared and wholly unprepared for living alone and living abroad.

First off I lived with a middle-aged woman recommended to me by another student at my college although I’m not sure why because she was quite nutty. This woman told me stories which made me afraid to leave the house, like tourists getting raped by Moroccans and she locked her kitchen because she was paranoid about me stealing her food. She would stand outside the bathroom with a timer when I took a shower, and I would get exactly five minutes of hot water, after that the boiler got turned off. Fanatical about saving electricity, all lights had to be off at 10pm.

A few weeks later when it got too much, I left and moved into another flat with three other Spanish girls. I learned a lot that year about how conservative and traditional my views were. I had been raised in a very traditional way and many of the views I had absorbed I had not even questioned. I remember having heated debates with them at the round lunch table about politics, religion and spirituality. The kind where everyone shouts at each other at once (which happened a lot in Spain).

At lunch time, which lasted for two hours or longer, we debated life after death, the Spanish Civil War, the British monarchy, education, gay rights, marriage, love and sex. I think I took contrary pleasure in coming down on the side of the conservative and the nay-sayer. I was quite dogmatic.

I wasn’t aware of it at the time, but that period was one of transformation in every sense.

I was in the perfect place for the shocks that life was about to give me.

The first one came in February, shortly before my 21st birthday when my mother left my father out of the blue. Subconsciously I was expecting it and thought it would not be a bad idea. I dreamt about it a few nights before it happened.

But the biggest shock I had was in taking on an empathic burden from that, that I carried around with me for a long time. It caused me a lot of grief – the kind that feels like physical pain in your chest and you just take each day as it comes because you can’t remember what happened yesterday or where you thought your life was going before it felt like life had kicked you in the chest.

And I remember seeing concealed satisfaction in my Spanish friends’ eyes when I told them about my parents splitting up, after I had argued so vigorously against divorce and unhappy people staying together for the sake of family. I couldn’t really blame them. I was very fanatical for someone who had views that weren’t even mine. My family fought, fell out and fell apart in New Zealand and I heard about it from 12,000 miles away, unable to do anything.

It is funny how eerily quiet life becomes just before those shocks came. My teenage years and family life had been very chaotic and fraught and I remember being in the University library just 20 minutes before my mother left, studying, and counting my blessings, remarking how quiet life was because I wasn’t used to that.

The second shock that I had came later when I was alone in the apartment and watching television. Our television was plugged into the wall via an adapter which was dodgy and kept falling out of the wall. When I plugged it back into the wall, I got an electric shock. It was a big shock because it threw me backwards and for a few hours afterwards, I could still feel electricity running through my nerves and twitching my arm.

But the physical shock was like a symbol for what happened underneath.

I remember after I had been shocked, I walked straight into the bathroom to take a look at myself because I felt different. I remembered crying and staring at myself in the mirror.

I realized that I had probably been in danger somewhat when I got shocked, as our furniture was made of glass and metal and I had been right next to the metal leg of the coffee table, and almost touching it. If I had been touching the metal part, that would have made a complete circuit.

Something strange happened to me while I was staring at myself in the mirror through my tears. Probably for the first time ever, my heart opened towards myself. I was angry but I was open to my own vulnerability for the first time.

And secondly, the shock gave me a different way of seeing things.

All of a sudden, I understood experientially, that I was not my body; nor my past, nor my beliefs about things. This came out of nowhere.

I felt that my body was divorced from who I was – just a shell that contained me.

This was a radical idea for me at the time. One that was beautiful and strange. I thought I must be the only one ever to have had this idea.

The way I saw the world changed after that experience.

While my family fell apart and my parents were getting a divorce, other things fell apart too. Bodies got divorced from the real people inside them.

I think those experiences which made me more tolerant also opened my ability to see in an intuitive sense too.

My life during the months after my parents split up was eventful and full of adventure. I stopped talking to my mother for several months, and for the first time in my life, it felt like no-one cared about me being on the straight and narrow.

I found freedom and got up to all sorts of exploits that my friends back home were amused to hear about. I read a lot of magical realism (Gabriel Garcia Marquez, Isabel Allende), Anais Nin, Paulo Coelho and various books on spirituality and books on alternative ways of living, like polyamory.

I felt like my spirit had been freed precisely because my fears had become reality. And so my worldview transformed itself from a staid, frightened view of the world, where I was afraid of bad things happening, to something bolder and more magical. My heart was broken but it was open.

When I got back to the UK for my final year, I returned changed. I was also more open in terms of what I was willing to explore with psychic abilities and I decided to explore my psychic abilities in earnest.  I ordered a book on intuitive development. As soon as I began practising the exercises in that book, something was awakened in me.  I began to have intense and vivid dreams.  I also began to see things moving in the corner of my eye.  By following the visualizations given in the book, I began to communicate with my spirit guides through guided visualizations. My clairvoyance had been awakened again and I began to see too much, so I shut down my third eye once again because I was freaked out.