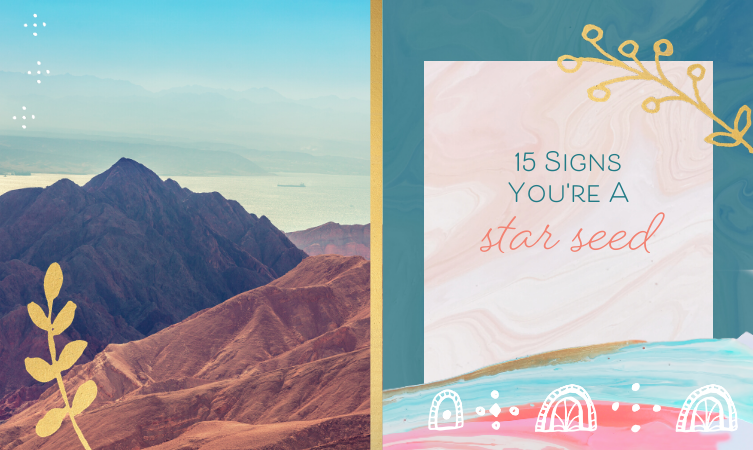 A star seed (also known as a star traveller) is a soul whose first several incarnations were spent in foreign star systems, planets, galaxies or parallel dimensions. Around 75% of the souls present here are Earth souls (Earth souls are souls who have only ever experienced incarnations here on earth). And the remaining 25% are star travellers, or star seeds. These star seeds do not actually all belong to one group, they belong to over 20 different soul groups of origin.

I am writing an article about this topic because almost all of the people I’ve read for (and worked with) over the last 13 years have been star travellers, so if you’re reading this, there’s a likelihood you are, too.

Although each group has a collective past which influences what their soul gifts, lessons and purpose is here, I’ve also noticed some common characteristics in that time that all star seeds share, and so in this article I’m going to share them with you.

Here are some signs that you are a star seed/star traveller:

This one is self-explanatory. Star seeds suspect this planet is not their home because they sense they are not native to Earth. They also often find this place rather harsh and long for somewhere that is more like where they came from (some places of incarnation are utopian worlds.)

Earth souls (aka the souls who are native to this planet) feel they fit in here. It is their home world, they know how it works and they have never experienced anywhere else. Star travellers, on the other hand, do not fit in so well. They tend to be less “mainstream” in their interests or inclinations, because they are a little bit different from the majority (i.e. earth souls) in many different ways. And on the soul level, they have knowledge of other worlds.

Star travellers tend to be much more interested in spirituality than Earth souls do. That may be because they originally come from other worlds which were of a much higher dimension and vibration than this place, and so tapping into spiritual, high-vibrational energies feels like a natural thing for them to do.

Many star travellers come from places where the technology and levels of consciousness were more advanced than here on earth, and so they hold within their soul’s memory, that sense of another place where things were different and more evolved.

You consider yourself an empath, or you are someone who perceives the spirit world. Star travellers tend to have more active upper chakras than Earth souls do, and as a result, they are more in touch with the spirit world and other peoples’ energies.

Some star traveller groups are here to help others on their spiritual path, and so they tend to identify as light workers.

Star travellers are also born with this sense that they are here to contribute or help others in some way. They aren’t always sure of what this purpose is exactly, but if so, they are on a path of finding out!

Star travellers tend to believe in life on other planets, and they are drawn to the night sky.

I’ve never read for, or worked with an earth soul. So therefore if you’re here in the first place, there’s a greater chance you’re a star traveller.

Many star travellers come from worlds where souls did not make sounds or write words in order to communicate. Therefore they have memories that exist deep in their consciousness of more effortless and efficient ways to communicate.

(10 Signs You’re Going Through A Spiritual Awakening). Earth souls do not often have awakening experiences. Star travellers often do.

(Take this quiz at the top of my home page, to find out!) Some star traveller groups are more obviously psychic than others.

Why are star seeds here?

In general, star seeds are here, to shine their light, contribute their soul gifts, and learn their soul lessons. And in doing so, they help this planet to evolve and raise its vibration.

But beyond that, each group has its own mission or purpose for being here, and so it can help to know exactly which group you belong to.

If you’re interested to find out which star seed group is yours, you might want to get a reading with our resident Akashic Record reader, Shelly Ebeling, or with someone I’ve trained.

I am also giving away 4 mini Akashic Record readings in the next week – those are readings which tell you about your soul group of origin. (Here’s how you can enter to win one of those.)

Alternatively, in the next few weeks I am bringing out an e-book about the different star traveller/star seed groups, and that can help you to identify your own soul group. So, stay tuned for that!

How Angels Work
Note from Anna: This guest post is by Bonnie Kelso, Artist, Creativity Coach and Reiki Master. It's a great illustration of how angelic energy wor...
Do You Belong to the Pleiadian Soul Group? All About the Pleiadians
In this article, I’m going to share some information about a soul group of origin that is probably the most well-known one, the Pleiadians. Fir...
What Do We Do In Between Incarnations?
In my conversations with students recently, I’ve found myself talking a lot about an interesting spiritual order called the ‘Third Order’. And whe...